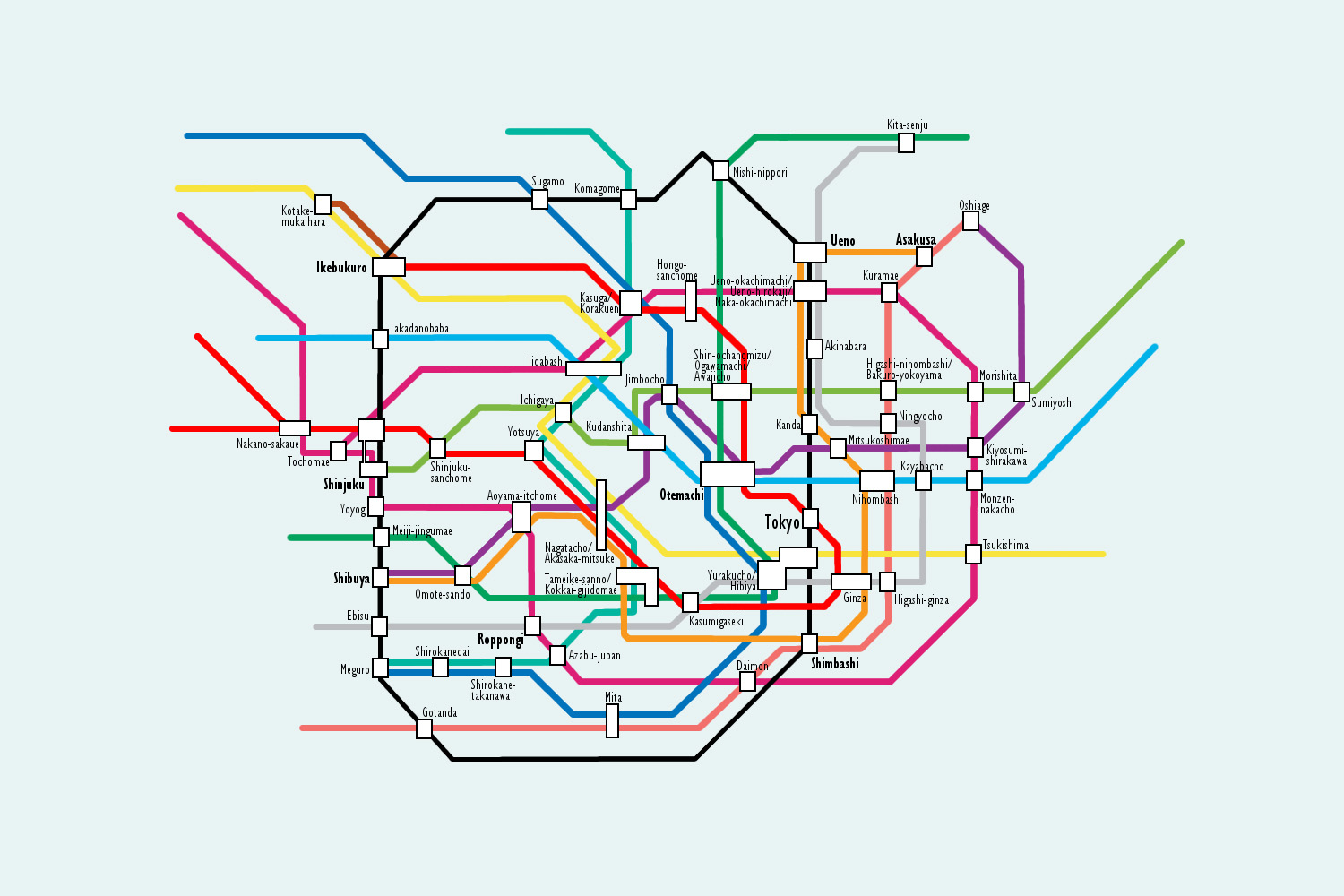 Logically, the question of how to use Tokyo subway can’t be too complicated to answer. Nearly 9 million people travel through the Tokyo underground system every day, many of whom are literal schoolchildren.

On the other hand, even if physically taking a train from one location to another is relatively easy, some ambiguities exist within the margins. These include confusion about the various lines (and the two different companies that manage them), as well as whether a Tokyo subway pass exists and if it’s a good value.

I invite you to continue reading to learn everything you ever wanted to know about the Tokyo underground. You’ll get the hang of it in no time—I promise!

Need help planning your trip to Tokyo? Commission a custom Japan itinerary!
Contents
1  Tokyo Metro vs. Toei Subway
2  How to Use Tokyo Subway, in Five Steps
2.1  Find the nearest station
2.2  Purchase a ticket
2.3  …or a PASMO/SUICA card
2.4  Wait at the (correct) platform
2.5  Listen to instructions and follow rules
3  Can You Enter the Tokyo Underground Using Your Phone?
4  Getting Around Tokyo with a Japan Rail Pass
5  Other FAQ About Using the Tokyo Underground
5.1  What is the Tokyo metro called?
5.2  Why is Tokyo Metro so good?
5.3  What is the difference between Tokyo subway and metro?
6  The Bottom Line

An essential piece of information to know when learning how to use Tokyo subway is that there are actually two subway systems: Tokyo Metro and Toei Subway. Each operated by a separate corporation of the same name, the Tokyo Metro and Toei Subway have nine (9) and four (4) lines, respectively. If you purchase tickets in cash, you will not be able to use tickets from one system to board the other, though this is not the case if you use a PASMO or SUICA card—more on those in a second.

This is important to note because many Tokyo train stations see lines of both systems pass through them. Popular Tokyo Metro Lines include the Marunouchi Line (red), the Chiyoda Line (green) and the Ginza Line (orange), while the the magenta Oedo Line and dark red Asakusa Line are two of the most recognizable routes that operate under the purview of the Toei Subway corporation.

How to Use Tokyo Subway, in Five Steps

Whether you have a physical Tokyo subway map or simply type “metro station” into Google Maps, it’s relatively easy to located the nearest underground station to where you are. Additionally, I’d recommend familiarizing yourself with both the Tokyo Metro logo and the Toei Subway logo, since seeing these on signs at street level is a surefire way to know you’ve reached a station. Within central Tokyo, you’re rarely more than 10 minutes by foot from one.

As it the case in most major cities, the Tokyo subway ticket price varies depending on the distance you travel, although you can generally expect it to be somewhere around ¥200 one-way. Assuming you don’t purchase an unlimited use pass such as the “1-Day Open Ticket” about, you will need to purchase a ticket to ride on the Tokyo Underground, which is notably not covered by the Japan Rail Pass.

How to use Tokyo subway can seem complicated the first few times, especially if you have to look at the serpentine map above the ticket machine to see how much you need to pay. One way to remove this stressor is to purchase a reloadable card (call PASMO or SUICA) from a ticket machine on your first trip. Although this won’t save you money, it will allow you to pass through the ticket gates (and allow you to transfer seamlessly between Tokyo’s two subway systems, plus other rail lines) with a simple tap.

Wait at the (correct) platform

As I mentioned above, many Tokyo underground stations see several different subway lines (and even some JR or private train lines) pass through them, so it’s essential to find the correct platform (i.e. the correct line, traveling in the right direction) as soon as you enter the paid area. This is especially important late at night, since the Tokyo subway hours are finite. If you miss the last train, you’ll need to take a pricey taxi or a long walk, or stay in a capsule hotel under less than ideal circumstances!

Perhaps surprisingly, given Japan’s reputation for strictness, Tokyo Metro rules are pretty lax, especially when it comes to eating and drinking. Etiquette, on the other hand, is of the utmost importance: You shouldn’t talk on your cellphone; you should give up your seat to elders. You should also pay attention to instructions and announcements, either over the train’s PA or from attendants within the station, such as those who may very well push you onto the train at rush hour (yes, this really happens!).

Can You Enter the Tokyo Underground Using Your Phone?

In theory, the Tokyo Metro app is an easy way to ride Tokyo’s underground rails, and not entirely different from technological advances that have made using subway systems around the world easy. However, this is Japan, so tedium and complication are features, not bugs. If you want to use ApplePay itself to access the Tokyo Metro, you will need to set the “region” of your phone to “Japanese” if you want to be able to tap into the Metro using NFC technology and your app.

However, there is a way around this. Specifically, after you purchase a PASMO card, you can install it into ApplePay (or, if you use an Android device, into Google Pay). Another benefit of doing this? You can use your PASMO card like cash almost anywhere in Japan, mostly notably at convenience stores where you would otherwise need to pay with bills and coins. PASMO can also integrate with Shinkansen ticket purchases, if you don’t plan to use a JR Pass.

Getting Around Tokyo with a Japan Rail Pass

When it comes to using Toei Subway to Tokyo Metro, JR Pass is worthless. Japan Railways has nothing to do with either of these systems, so your pass doesn’t permit you entry to either. On the other hand, it is possible to travel many places within Tokyo using JR Lines, whether you ride the circular JR Yamanote Line, east-west services like the JR Chuo Line or north-south routes such as the JR Keihin-Tohoku Line and the JR Yokokusa Line, the latter of which actually goes all the way to Kamakura.

Although they are operated by different companies, and the former runs (mostly) underground while the latter is (mostly) above ground, there are actually some notable similarities when it comes to Tokyo Metro vs JR Lines. Namely that both are utilitarian local trains that stop at most every station, and are primarily commuter services used by Tokyo’s masses, as opposed to anything glamorous. The experience of riding most any train in Tokyo (save, perhaps, for the Shinkansen) is remarkably standard!

Other FAQ About Using the Tokyo Underground

What is the Tokyo Metro called?

Why is Tokyo Metro so good?

Tokyo Metro is good for many reasons, including how often services run, how clean subway cars and stations are and how affordable tickets tend to be relative to the cost of living in Tokyo. Many travelers also like the convenience of using pre-loaded travel cards like PASMO and Suica.

What is the difference between Tokyo subway and metro?

The main difference between Tokyo Metro and Toei Subway is that they are operated by different companies. If you buy a single-ride ticket, you won’t be able to use it to transfer between Tokyo Metro and Toei Subway lines, such as transferring between the Marunouchi and Shinjuku lines at Shinjuku Station. To do this, you’ll need to be using a reloadable travel card like PASMO or Suica, or a Tokyo transport pass.

If you arrived on this page curious about how to use Tokyo subway, I have a feeling you’re an expert by now. From differentiating between the Tokyo Metro and Toei Subway, to deciding whether to buy individual tickets or purchase a reloadable PASMO or SUICA card, to figuring out how to navigate Tokyo (well, as best as possible) using only JR trains, I’ve addressed all the burning questions you have about the Tokyo underground—and then some. Still have confusion about the logistics and mechanics of your upcoming trip to Japan? Commission a custom Japan itinerary, and let me sweat the details!