My 2021 cherry blossom travels aren’t over, although—and I never thought I’d say this—I’m glad they’re on pause for a couple weeks. Having to wait in line to take a photo will do that to you, even if it’s a photo of Mt. Fuji behind a pagoda surrounded by sakura no ki.

On the other hand, I’ve decided to spend this pause visiting Hitachi Seaside Park, home of Japan’s famous, rolling fields of periwinkle nemophila flowers, which is arguably as Insta-famous as Churei-to. As I drove toward the entrance to the park last Thursday morning, the parking lot overflowing in spite of it being a weekday, I wondered if I hadn’t done the old frying pan-fire jump.

But I’m getting ahead of myself. This trip, although ostensibly about visiting the Hitachi blue flowers at long last, also represented another milestone: My first visit to Ibaraki, which has the unfortunate distinction of being Japan’s least attractive prefecture, according to national public opinion polls.

As for me, I’m on the fence. While I found the center of Mito (the prefectural capital) to be run-down, drab and at least three decades out of date, it did have some redeeming factors. Namely the fluorescent azalea bushes at Kairaku-en, which along with Kanazawa’s Kenrokuen-en and Okayama’s Koraku-en is one of the top three landscape gardens in Japan, according to public opinion. (The same public, I assume, that so savages Ibaraki-ken year after year—but I digress.)

Ibaraki, at least what I saw of it from spending a night and morning in Mito, is neither as bad as people say, nor good enough to do more than use it as a base for your Hitachi adventure.

After renting a car and leaving behind the city center, which was proudly decked out in “Tokyo 2020” paraphernalia so weathered I imagine it’s been up since before the postponement, I drove around 20 kilometers. This took nearly an hour because of Japan’s slow speed limits, and even slower drivers.

But now is not the time to complain: We’re back to where this essay started, which for all the hype about Ibaraki’s apparent ugliness, is one of the most gorgeous places I’ve been in Japan.

Likewise, while the queue just before opening was longer than I expected or hoped, most of the people in front of me were old and/or slow. I arrived to Miharashi-no-oka, where most of the nemophila are planted, and had at least 15 minutes of photo time mostly to myself, before the throngs of tourists (and their children and dogs, the latter of which traveled more often in strollers than the former) invaded. 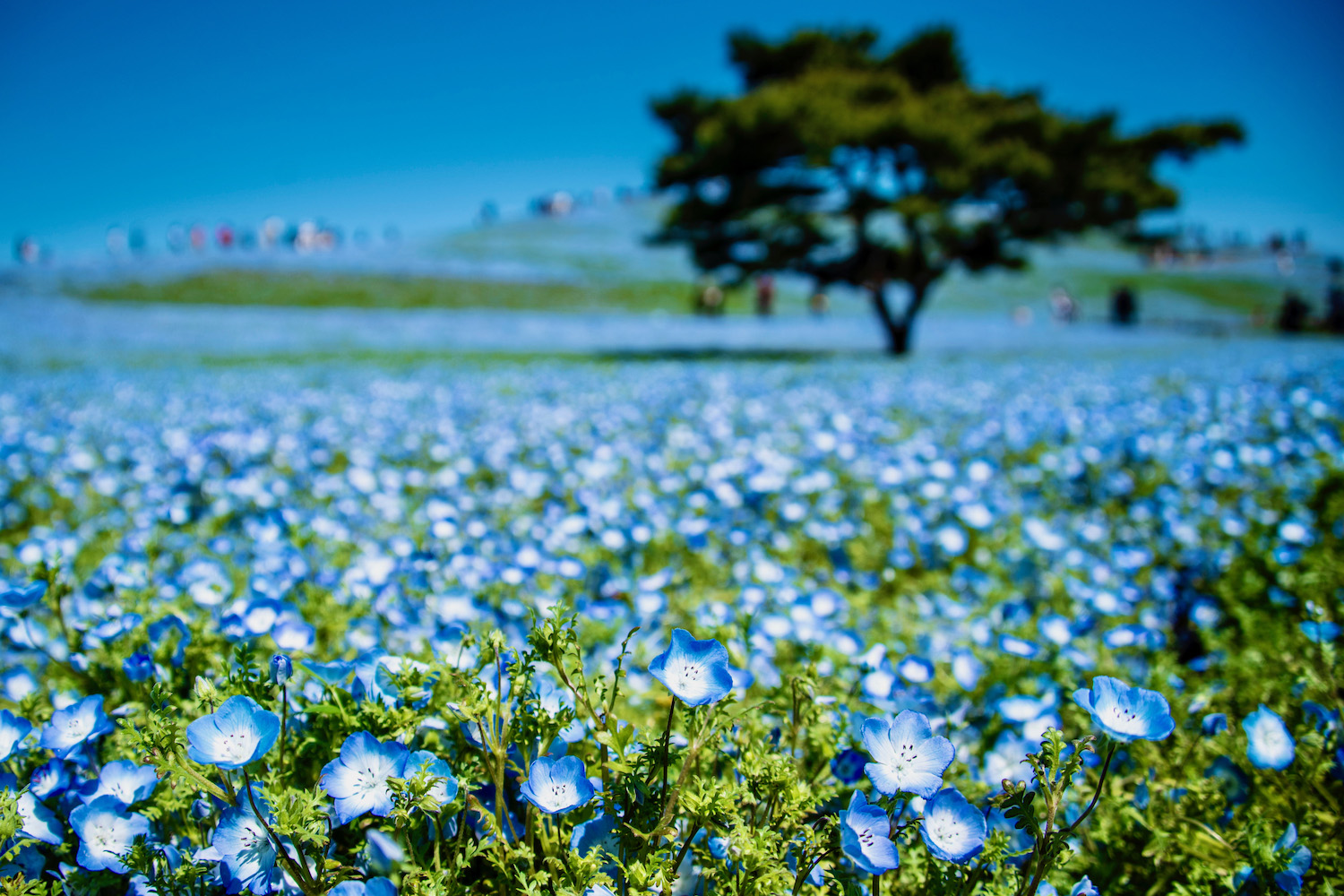 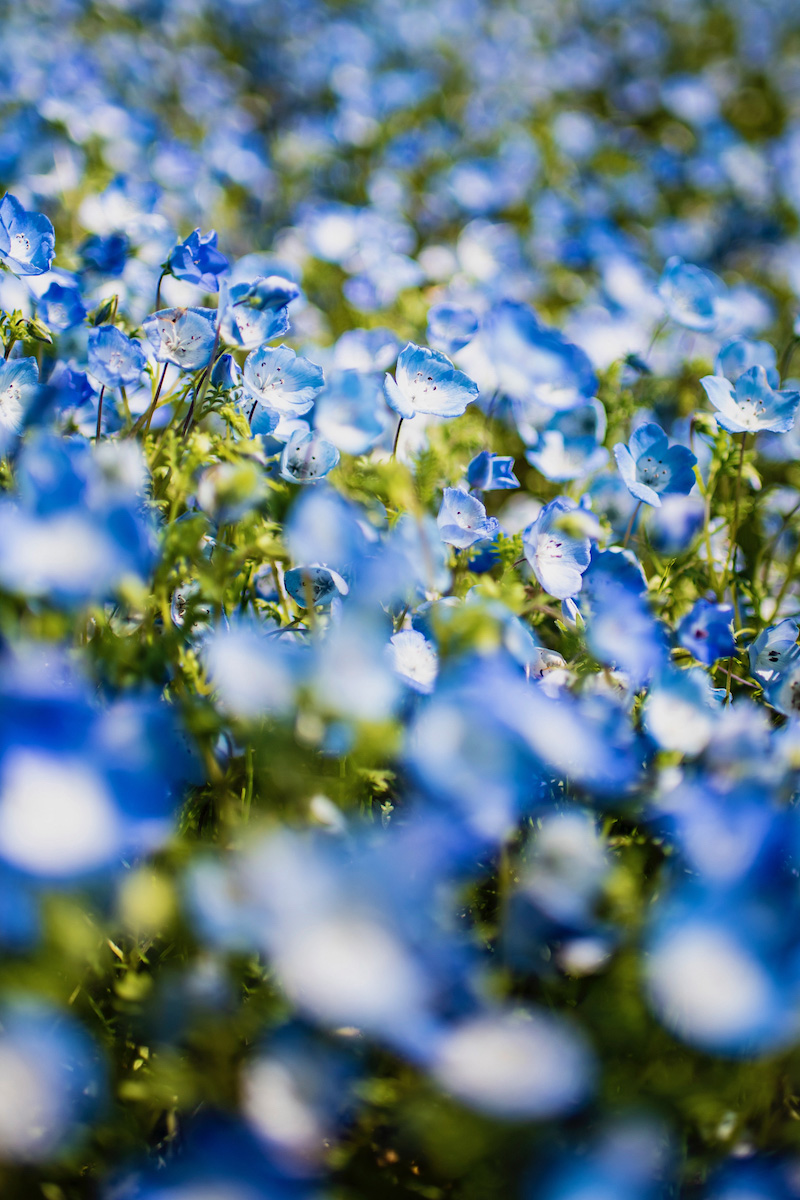 Past that point—the invasion I mean—things mostly melded together, albeit not in an entirely bad way. By that time, to be sure, I’d more than found my photography groove for the day.

Plus, I was far ahead of the crowd. I’d met all my own creative expectations atop the proverbial hill and was back at ground level, just behind an unexpected field of golden rapeseed flowers, by the time the human beings in attendance reached a truly obnoxious level. At that point, I was far enough away that their critical concentration seemed mesmerizing, rather than maddening.

I finished around two hours after I began; I had two hours left with my rental car. Although I initially considered returning it early, I instead decided to be ambitious: A trip to Ushiku Buddha, in spite of this year’s early sakura bloom having fully completed its cycle before the site’s shibazakura phlox even began blooming, seemed just what the doctor ordered.

It did end up being a fitting end to my beautiful day, although the number of planes taking off or landing during my time there—only one—seemed strange, given how close to Narita Airport it is.

Like the standing Buddha itself, I tried to stay grounded in the present moment, and mindful that the pain I felt about the continued stasis of the world would necessitate suffering only if I allowed it to do so. The skies will be full again one day; nothing last forever, not even purgatory. Speeding away from Ibaraki, which I’m glad I enjoyed as much as I did but also wish I’d loved more, I’m trying less to obsess about the point when my bright future—our bright future—will come over the horizon, and more about willing it into existence from where I am—where we are—right now.

I see a crowded ocean park with hundreds of thousands of blue flowers, a veritable second sea along the Pacific. I hear many languages being spoken. I smell the salt of the waves lapping just offshore. I taste funky blue ice cream flavored with club soda, of all things.

I feel it in my bones—this will be over soon.

Other FAQ About Hitachi Seaside Park

What flowers are in Hitachi Seaside Park?

What country is Hitachi Seaside Park?

How to go Hitachi Seaside Park?