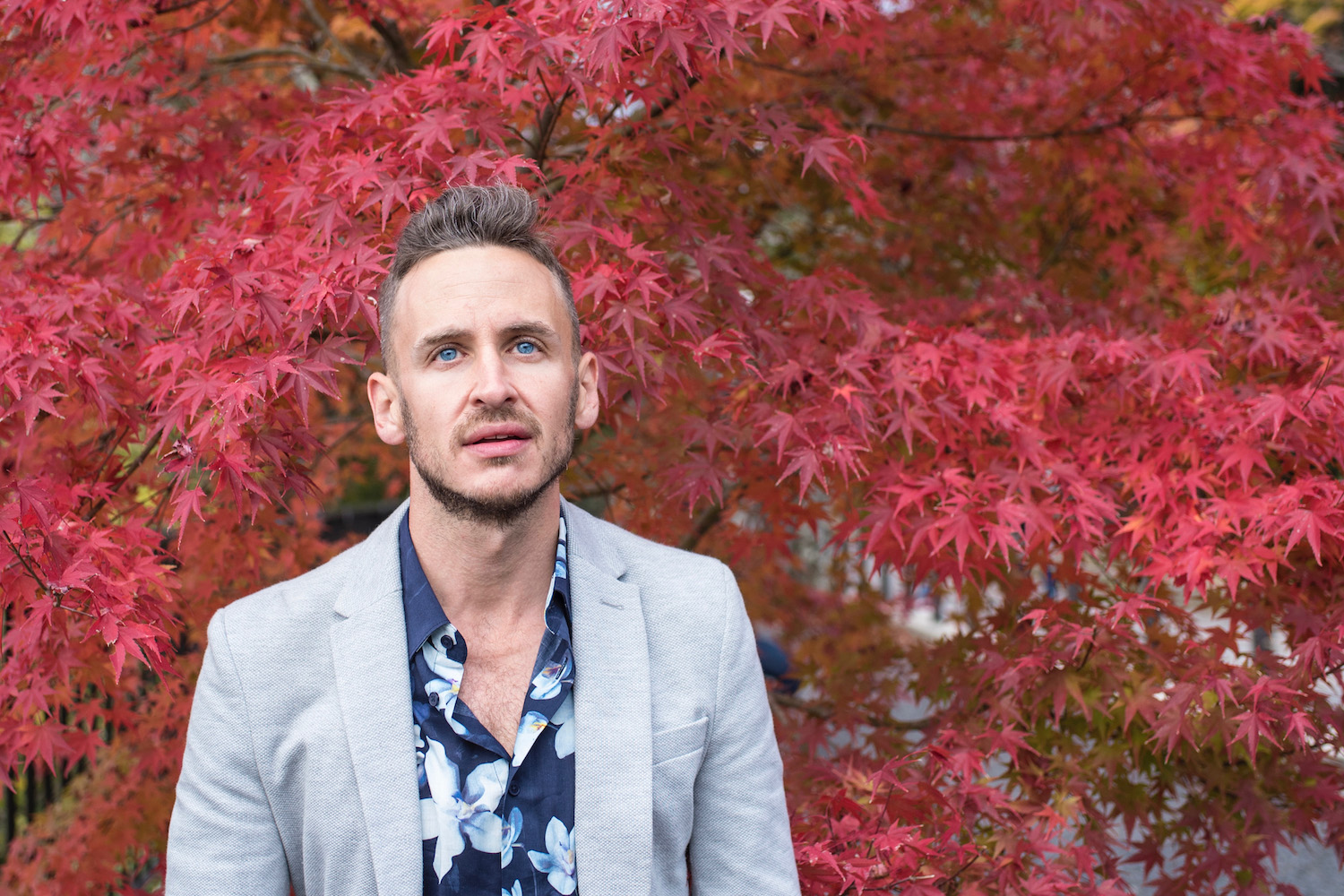 Kyoto in November is delightful for everyone, but especially photographers. I tried to mute my jubilation as the bus I was on this morning approached Kinaku-ji, a temple that isn’t actually as ancient as you might think (it was largely re-built after a fire in the 1940s, more than five centuries after its original construction), but definitely lives up to the translation of its name into English.

Not that I could focus more than momentarily on its gold-metallic paint once I began traipsing through the grounds: The leaves here were at their peak, especially the red maples but also the odd yellow ginkgo. I hadn’t expected it, if I’m honest, based not only what I’d seen out the window of the bus, but what my experience in Osaka yesterday.

Just then, I noticed the small “No Tripod” sign. It was annoying, to be sure, since I’d planned to take a selfie here. But though I tried to rationalize the policy (and to be honest with myself: The literal thousands of other tourists around me would make setting up a camera stand all but impossible), I had a terrible feeling that many of the things to do in Kyoto would be similarly inhospitable.

The Hordes Moved in Unison

I glossed over the size of the crowd at Kinkaku-ji, but make no mistake: Kyoto in November is a madhouse, packed more fully than even cherry blossom season, by my estimation. Even if I hadn’t felt slightly pissed off as I pushed my way slowly through the hordes, which moved in unison with an effect I can only describe as viscous, I’d have needed a break. 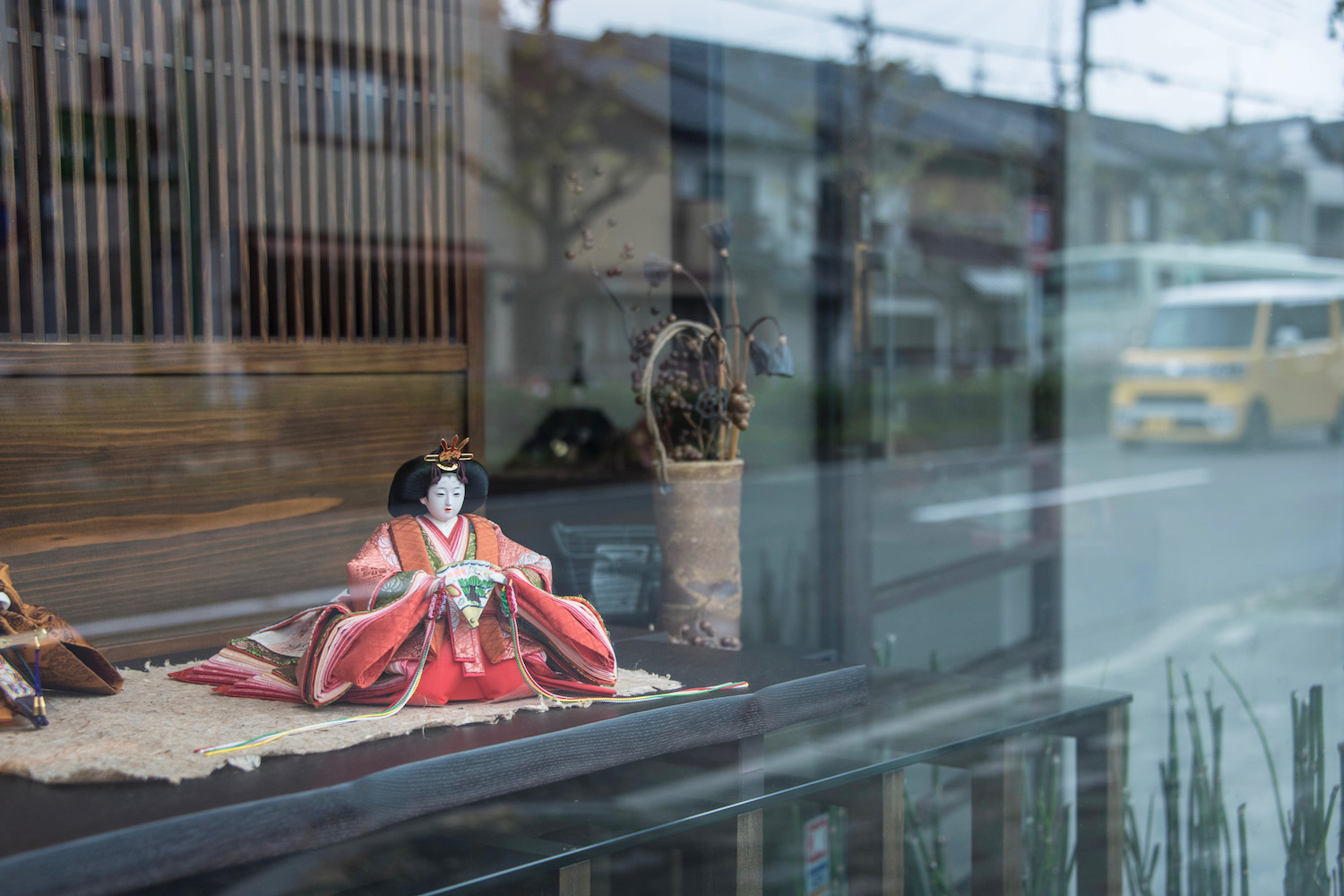 As a result, I ended up walking about half of the way to Ginkaku-ji, the Silver Pavilion. To my chagrin, there wasn’t much worth stopping for en route, minus a particularly beautiful Geisha ceramic, but the reprieve was nice—and needed.

I’d remembered mostly twisty Japanese pines dotting the landscape here, and was surprised to find an array of colorful leaves at least as impressive as what I’d seen across town at the Golden Pavilion. Maybe more, since the small hill behind this temple offers a perfect view of the temple.

Do you see what’s happening to me during my Kyoto autumn sojourn? I’m so in awe of the beauty that I fail to mention things I hated (yes, this temple also had a tripod ban), even as I’m writing. I literally had to remind myself to mention it just now. 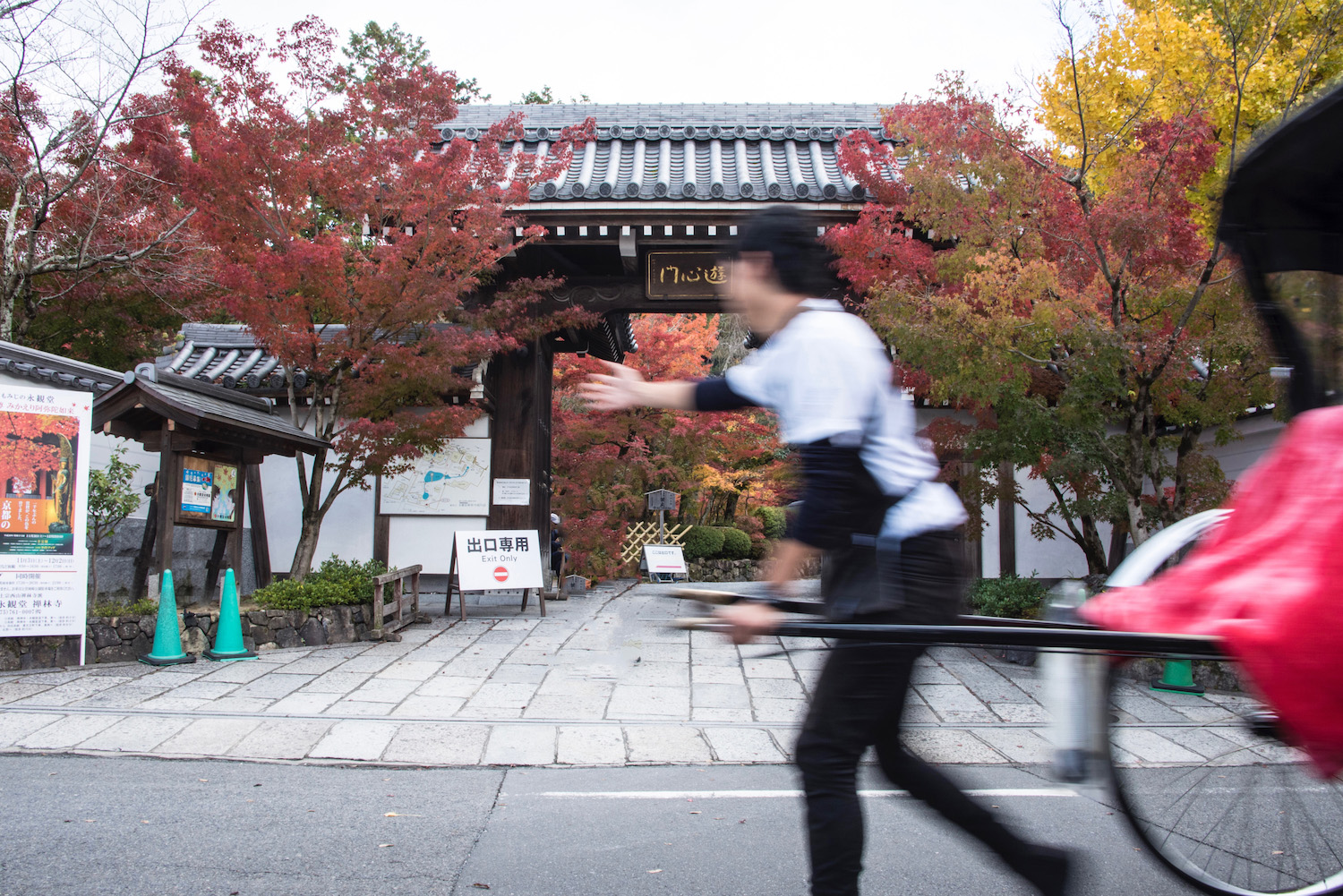 (There’s a point though, as you’ll see—I’m not just bitching.)

My walk southward along the Philosopher’s Path, was shorter than I expected it to be (I didn’t remember it only taking 30 minutes to get from Ginkaku-ji to Nanzen-ji) and more pleasant, with impressive bursts of foliage and inviting, small temples all along the way. By the time I reached Eikando, which sits just before Nanzen-ji, I was wholly delighted. 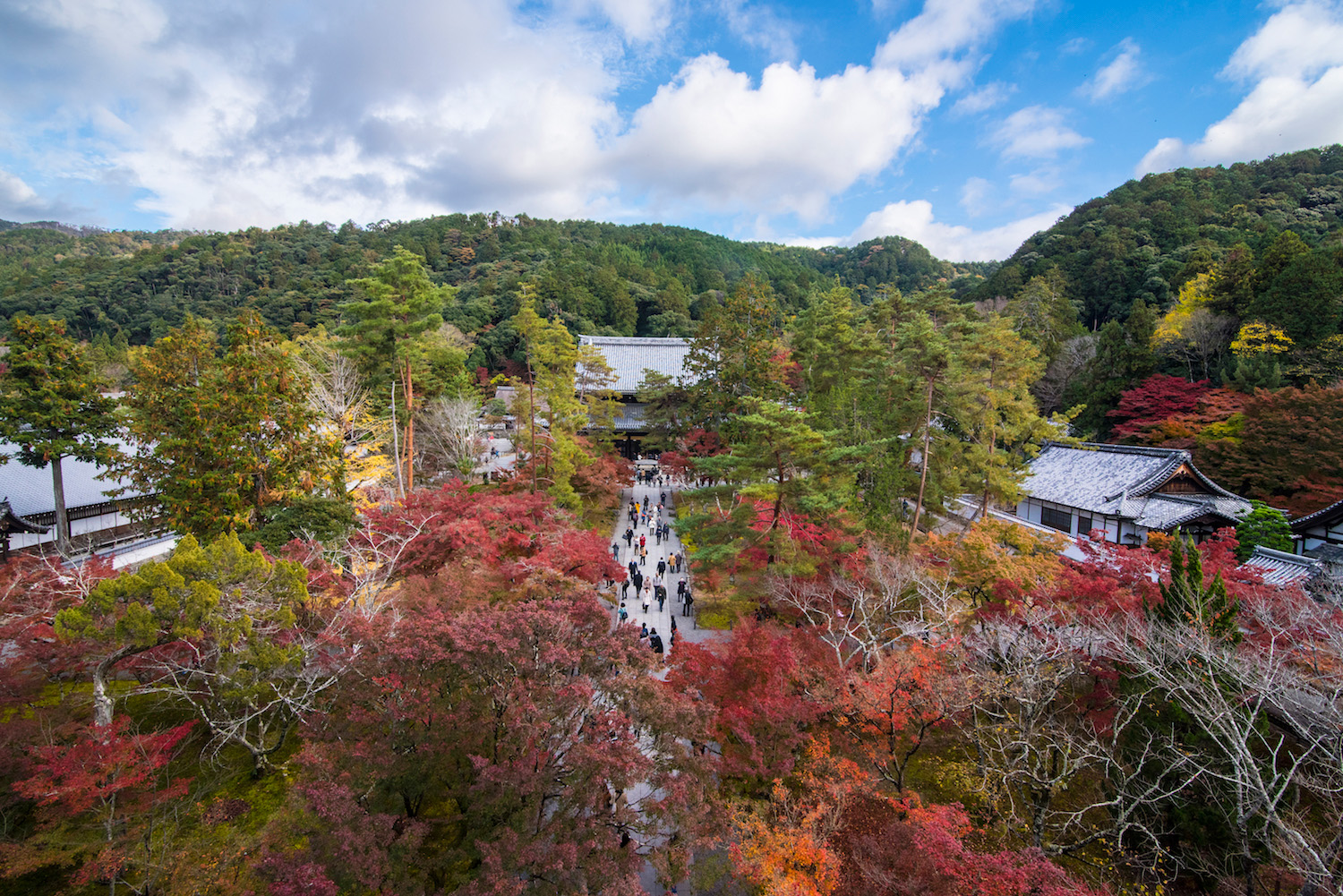 I’d been walking with my assembled tripod, which I’d used to take selfies on (and off) the Philosopher’s Path, finally placing myself (and my shirt with silkscreen flowers on it) in the context of Kyoto in November.

Though I haven’t been to Eikando in many years, I assumed it would have a similar tripod policy to the other “major” attractions, so I decided to stay outside the paid zone. To my shock, a man came up to me anyway, and told me to put it away.

“This is a public area, sir,” I said politely but firmly after his third request. “I think you need to go do something else.”

Go away he did, and I was able to photograph the Kyoto autumn leaves in peace—for a few minutes anyway. Another man (one, oddly, who spoke even less English) came over not long after, and made a shocking declaration.

“He told you they were illegal?” laughed Julian, a British photographer I met just after nightfall this evening, as we both attempted to photograph Yasaka pagoda through the legions of Chinese girls dressed in kimonos. 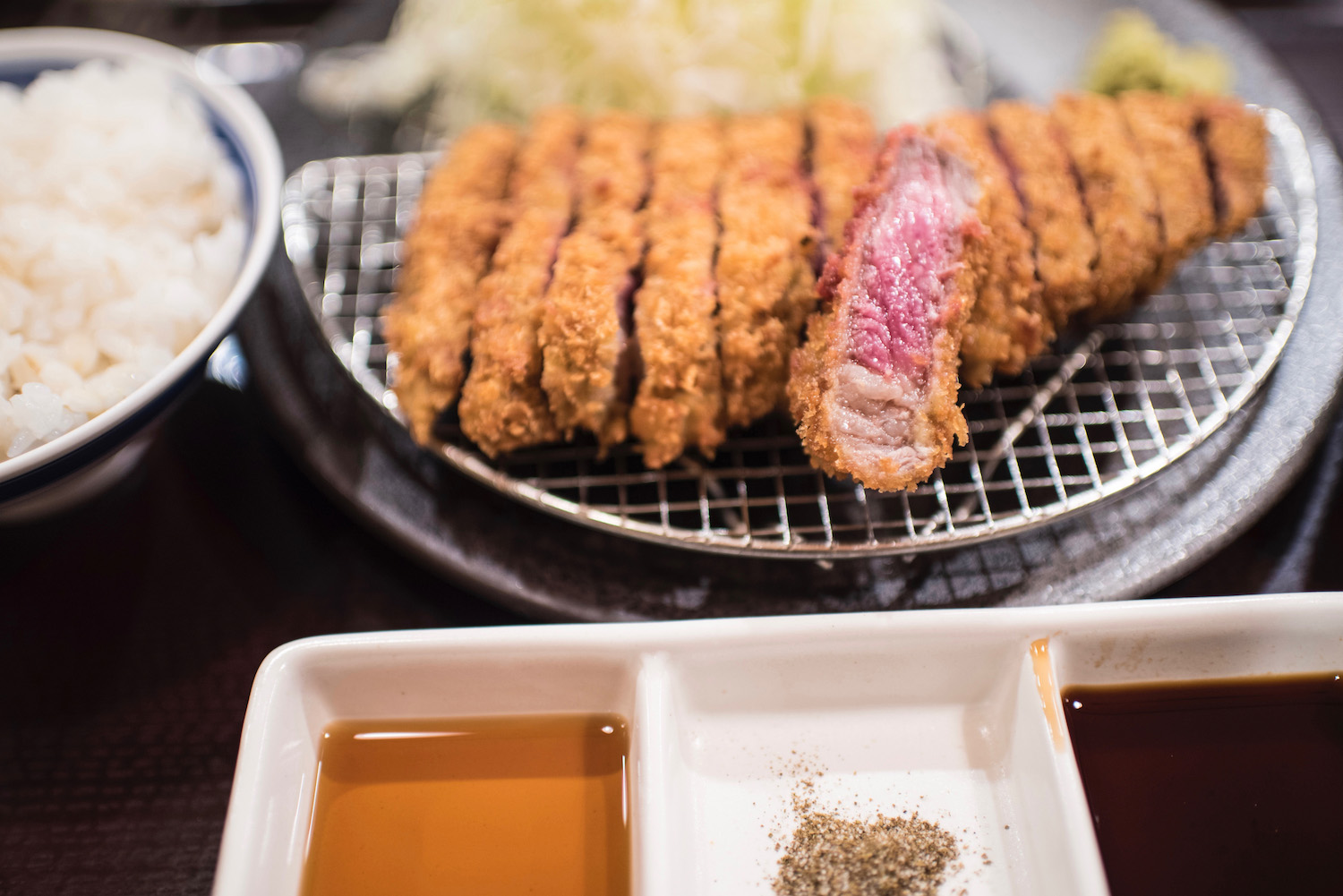 I laughed sarcastically. “I’d expect that sort of bullshitting in many countries, but not in Japan. I hope it was just a linguistic error—the city of Kyoto would be stupid to ban tripods, what will all the people like us who come here.”

Not that I’d really thought of the incident during the last few hours of the day. Having ascended Kiyomizu-dera just before sunset, I stood in awe beneath its pagoda as I watched the clouds, which had covered the entire sky the first half of the day, swirl around its sudden blueness like socks in a washing machine.

Fiery maples flanked me to the left, which allowed me to get capture what is probably the ultimate panorama of Kyoto in November. It was a transcendental experience, even though Kiyomizu’s main temple is still under renovation. 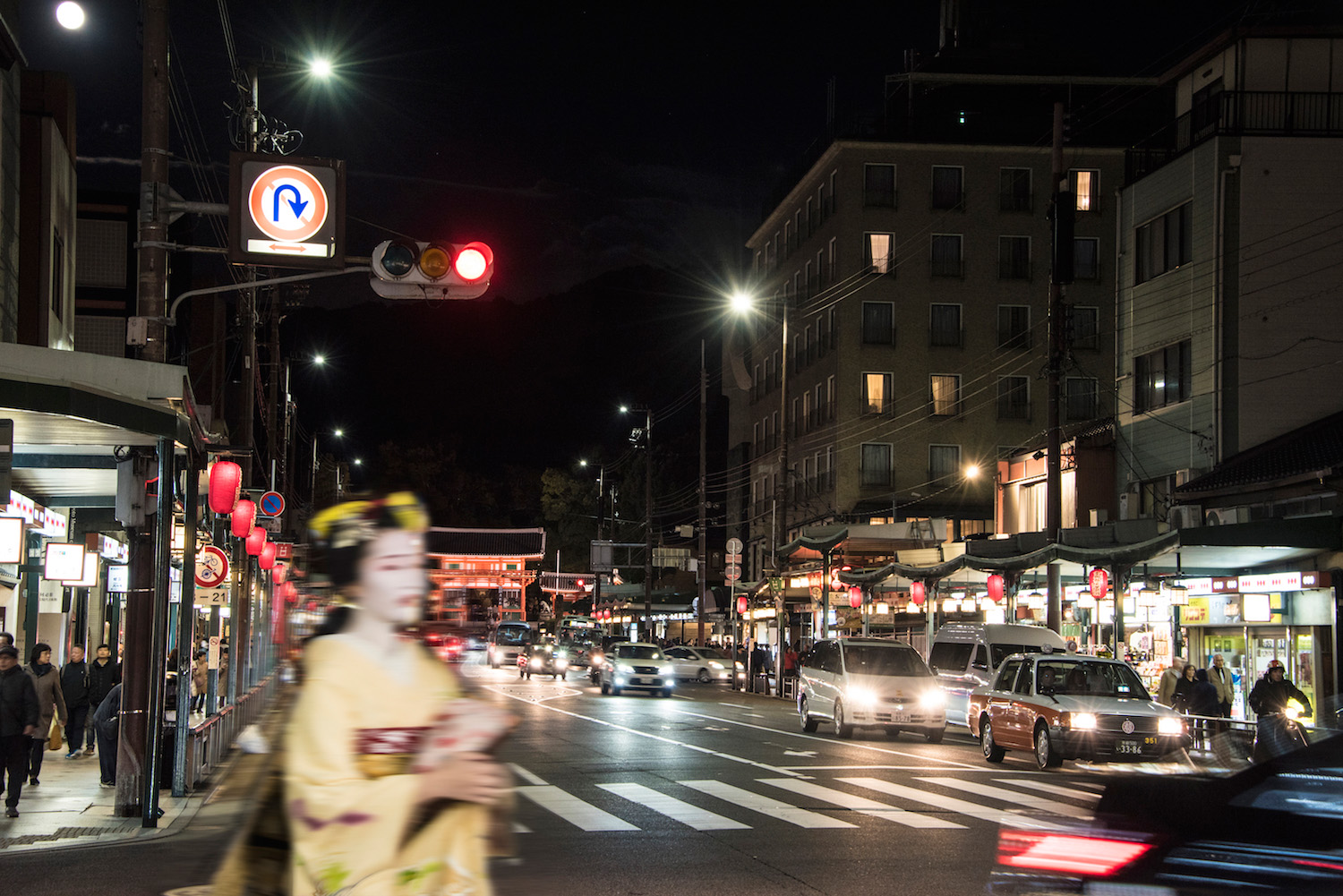 My day just kept getting better, in fact. After I said farewell to Julian, I headed into Gion for a bit, and saw my first Geisha in the wild, so to speak, a real-life call back to the ceramic one that had caught my eye earlier in the day. I capped off the evening with a fried beef cutlet, which was out-of-this-world delicious, and “Kyoto style,” which I suppose means you can’t photograph it with a tripod.

I’m kidding, of course—I still don’t know whether tripods are technically illegal in Kyoto. What I do know is that my first day in Kyoto in November smashed my expectations to smithereens. I’m incredible excited for what the rest of my autumn travels in Kansai will bring, even if I do feel the slightest bit annoyed when I imagine being harassed about my camera equipment. Now, for my first sleep at the wonderful Ryokan Kyoraku in nearly four years!

Other FAQ About Kyoto in November

Is Kyoto crowded in November?

Kyoto can be overwhelmingly crowded in November, particularly during the second half of the month when the autumn leaves reach their peak. You can expect hotel prices to be high, availability to be low and most places you go absolutely swamped with people, unless you visit early in the morning or late at night.

What is there to do in Kyoto in November?

Kyoto is a koyo (autumn leaves viewing) paradise in November. You can see these in historic Higashiyama, whether along the scenic Philosopher’s Path or at ancient temples like Chion-in or Kiyomizu-dera, atop Mt. Hiei overlooking Lake Biwa or in the lush Arashiyama district in western Kyoto.

Does it snow in Kyoto in November?

Kyoto doesn’t get much snow at all, at any time of the year. However, if snow does fall in Kyoto, it is almost certain to occur in January or February, or maybe December at the earliest. It is almost unheard of for snow to fall in Kyoto during the month of November.