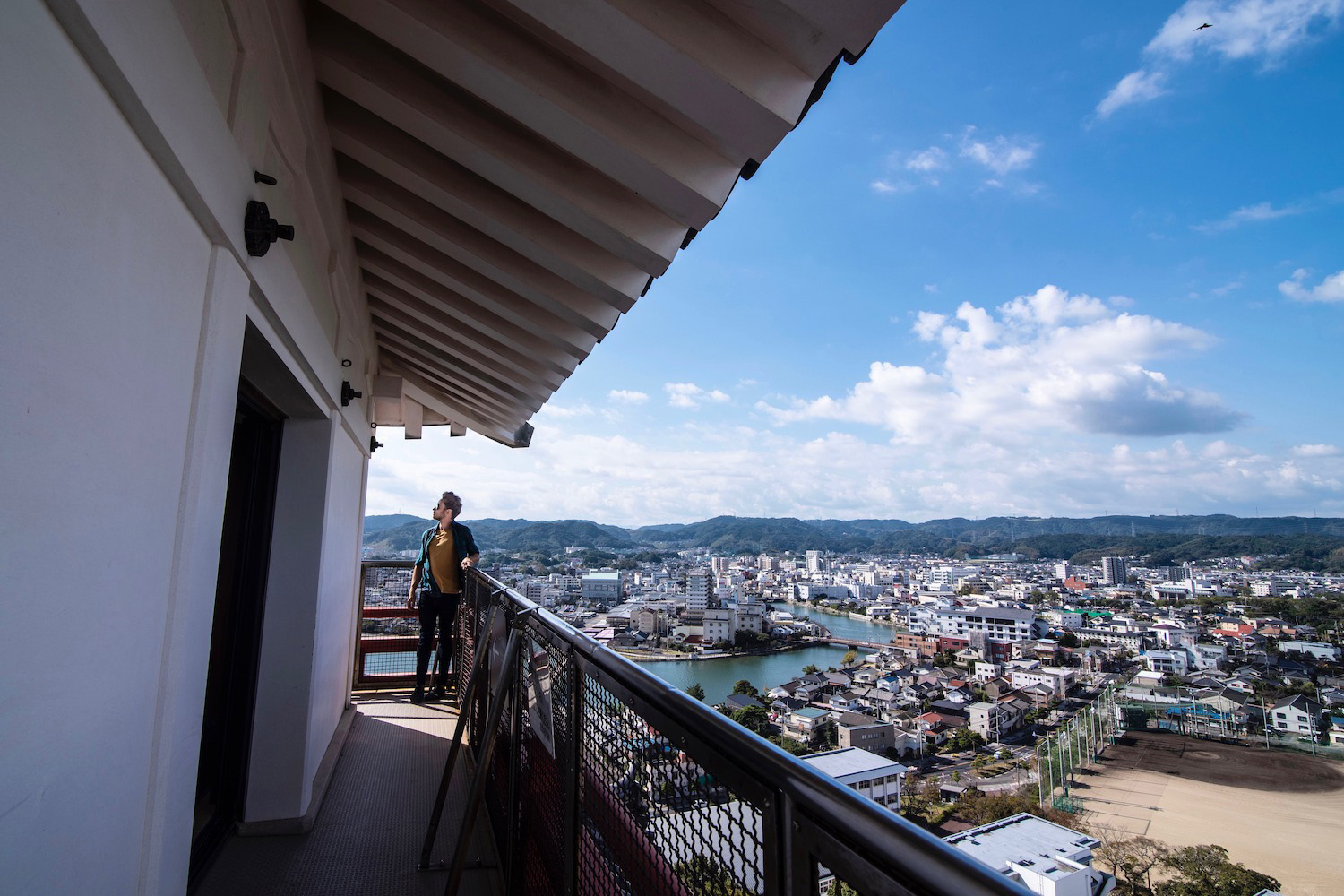 I was in no hurry to get to Karatsu Castle Tuesday morning, neither when it came to leaving my hotel in Fukuoka, nor once I disembarked at Karatsu Station 90 minutes later. The sky was like a flowing stream of clouds as I walked under the patinaed spires of the Former Karatsu Bank, and I wanted to let its current carry me.

On the other hand, I’d be lying if I said I didn’t get more pep in my step as I caught my first glimpse of the edifice perched on its hilltop. I saw a salaryman walking to and fro around the tenshu, and although I was also playing close enough attention to see the decidedly modern safety fencing, I wanted to get up there as immediately as possible.

I shirked taking the underpass—doing the Japanese thing—and instead jaywalked toward the stone staircase that led up to the castle. Regret quickly replaced relief when I reached the top, a latticed ceiling covered with a patchwork of vines above me: Why hadn’t I come during wisteria season?

Regret isn’t the right word, of course. I could never feel regretful about visiting a Japanese castle, even a mid-20th century concrete reproduction currently undergoing extensive renovations, even without the wisteria wisps and profusions of sakura present during earlier months of the year. 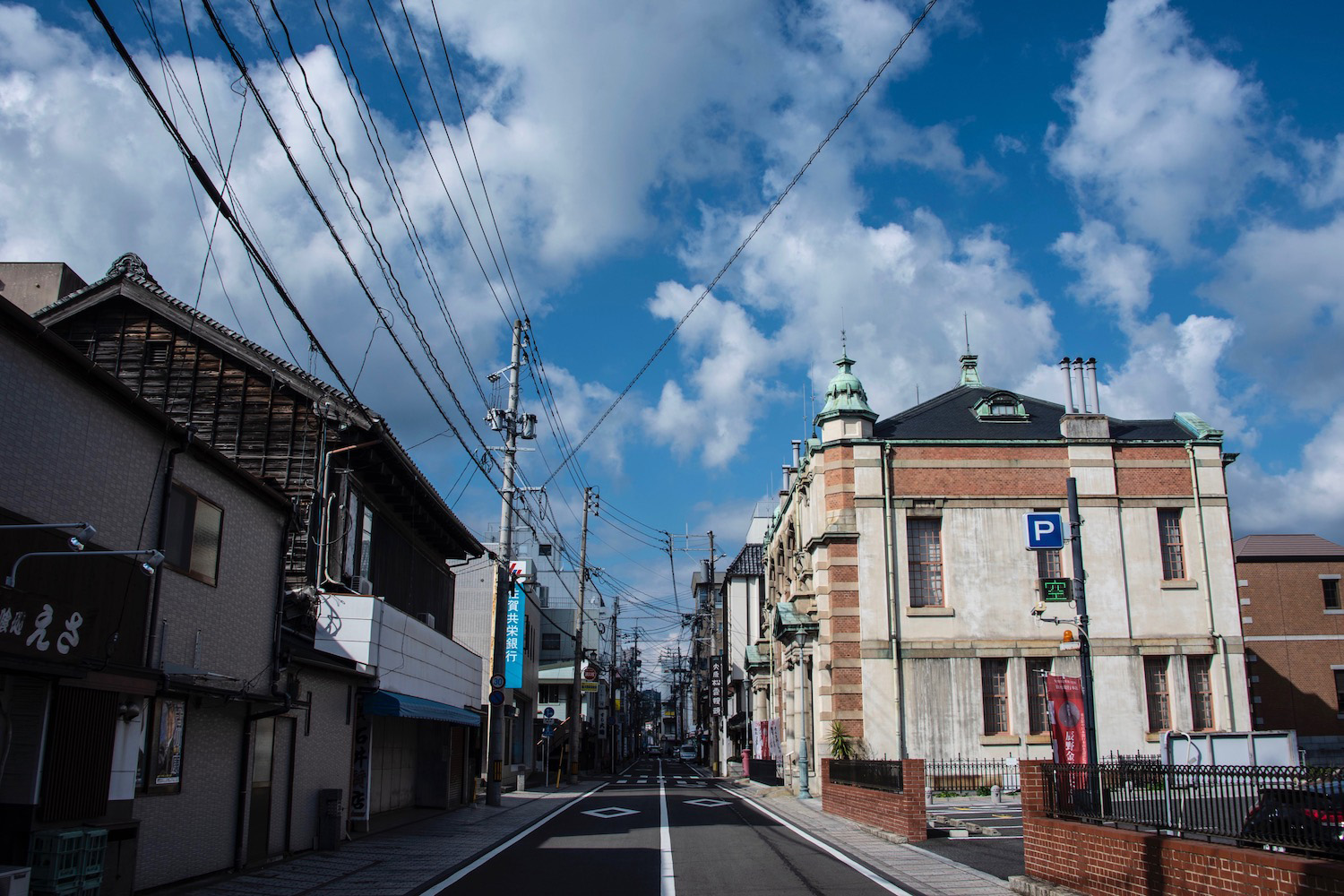 No, I wasn’t regretful—I was hopeful that I’d have an opportunity to return to this same place under even better circumstances, even if I couldn’t really complain about the sky, or the panoramic sea and city views I enjoyed from the keep. Views of the sea and the city and Takashima Island, which I still wasn’t sure if I wanted to visit or not.

It had come up, of course, as I researched my day trip to Karatsu Castle from Fukuoka. Apparently, it was something of a “cat island,” like Okunoshima near Hiroshima. It also seemed that most remaining human residents there (though there weren’t many, to be fair) had the same surname—by marriage as much as by blood, the backwoods part of me hoped.

“Where are you from?” Asked a strange-looking bespectacled man standing approximately halfway between the castle exit and the bridge to the Takashima jetty. When I answered that I was American, he replied without specifically acknowledging that fact. “Have a nice day!”

I was lucky enough to arrive at the jetty just 30 minutes before the next departure (they only go every two hours), though I was surprised how many people (I guess they were all Nozakis) were already huddled in the ramshackle waiting room. Among them was the strange man who had greeted me outside the castle, who spoke to me once again. “Funny seeing you again so soon”—only it wasn’t, because the jetty was the only logical place someone walking due south from the castle could’ve gone.

I decided to pass the time until departure taking some last photographs of Karatsu Castle, which looked even more stunning (if that was even possible) from this new perspective. Boarding started sooner than I expected; the rickety boat quickly filled to capacity.

My friend (it seemed he saw me as a friend, at least) was nowhere to be found. I found this somewhat odd, but then he was somewhat odd—the fact that it didn’t make sense made sense, if that makes any sense. 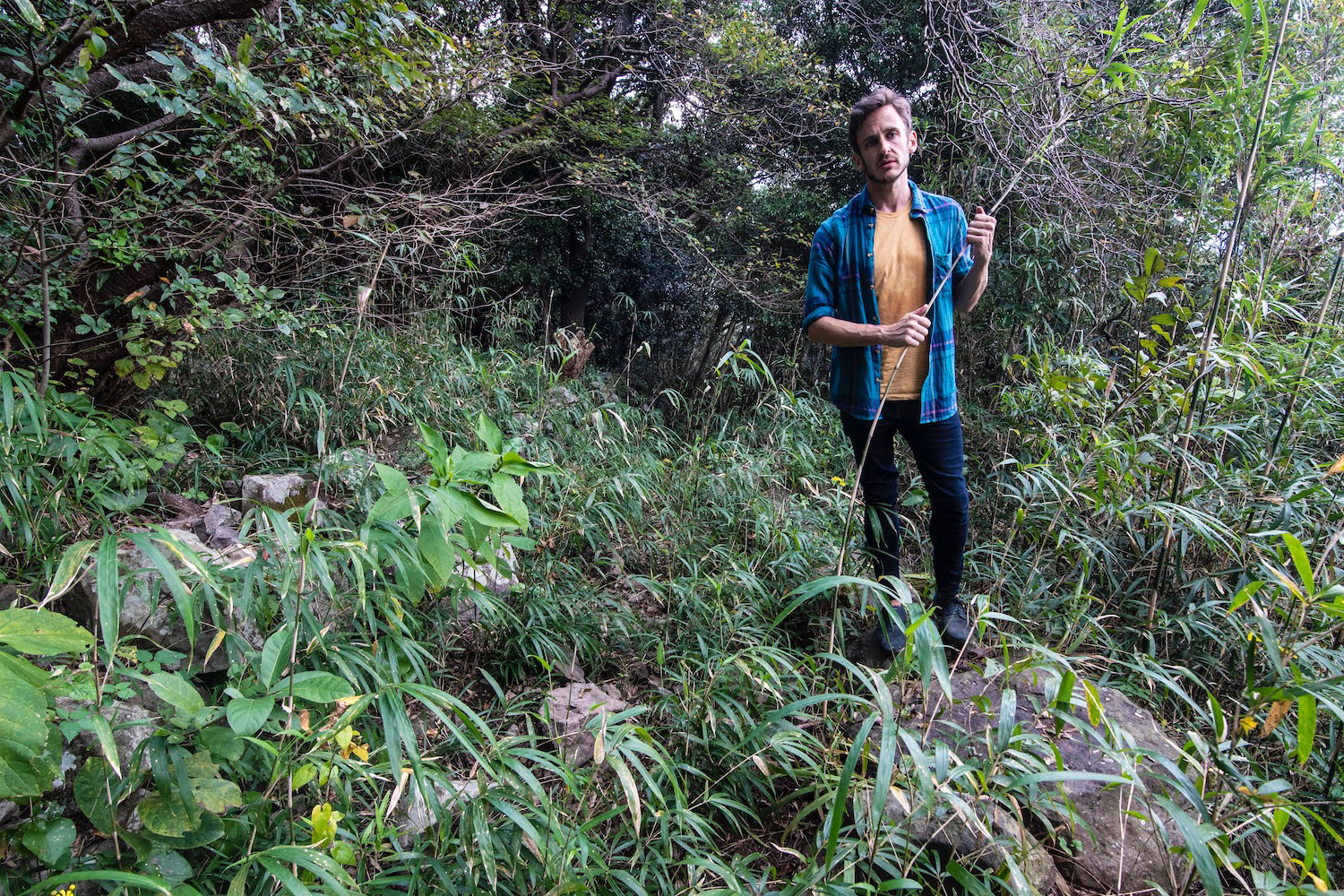 Once on the island, I followed the white paw prints painted on the ground, assuming they would lead me to the hundreds of cats I hoped would be awaiting. They didn’t: Instead, a small sundry shop manned by two elderly women (and selling some truly fabulous feline swag) seemed to serve as a more paltry version of one of Tokyo’s cat cafes. I don’t think I ended up seeing more than a single other individual anywhere else on the island.

Of course, I’d come to Takashima primarily to enjoy an across-the-water view of Karatsu Castle, and it was with this eventuality in mind that I followed a second set of paw prints (this one yellow, like the stalks of goldenrod that grow wild here) to a path I hoped would lead to a viewpoint. 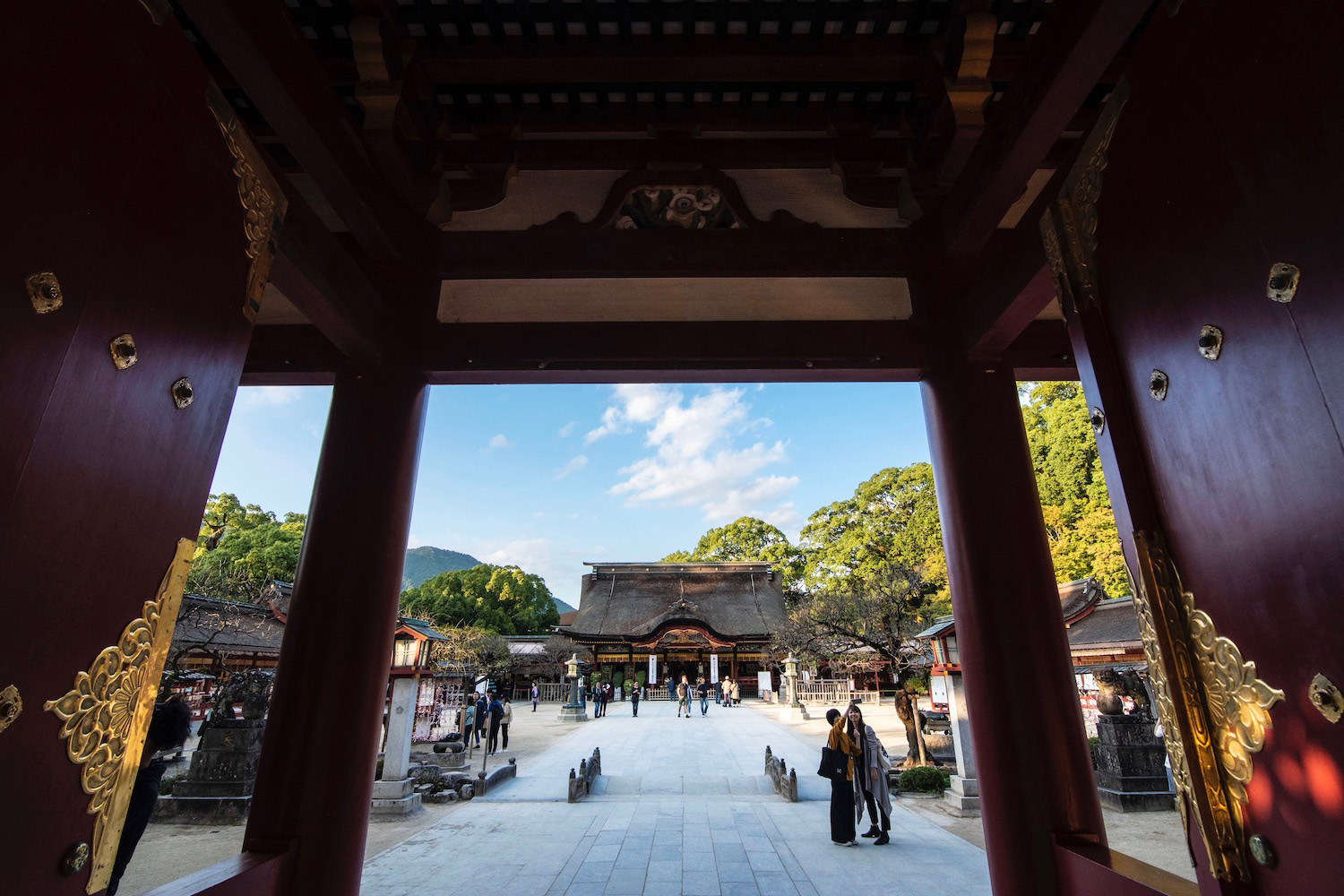 It did, though it was overgrown to an almost disconcerting extent, like the blogger whose advice I was following had said it would be. (Disconcerting to travelers who have never seen this sort of return to Japan—when I explored San’in this past May, it had been the exception rather than the norm.)

I shouldn’t have been surprised, then, that the seaward-facing window of the observation deck was almost completely blocked by thick brush, though this did admittedly accent the seemingly abandoned shrine at the top in a perfectly unsettling way. The parallels between this ultimately futile ascent and my recently aborted quasi-relationship were not lost on me, however. 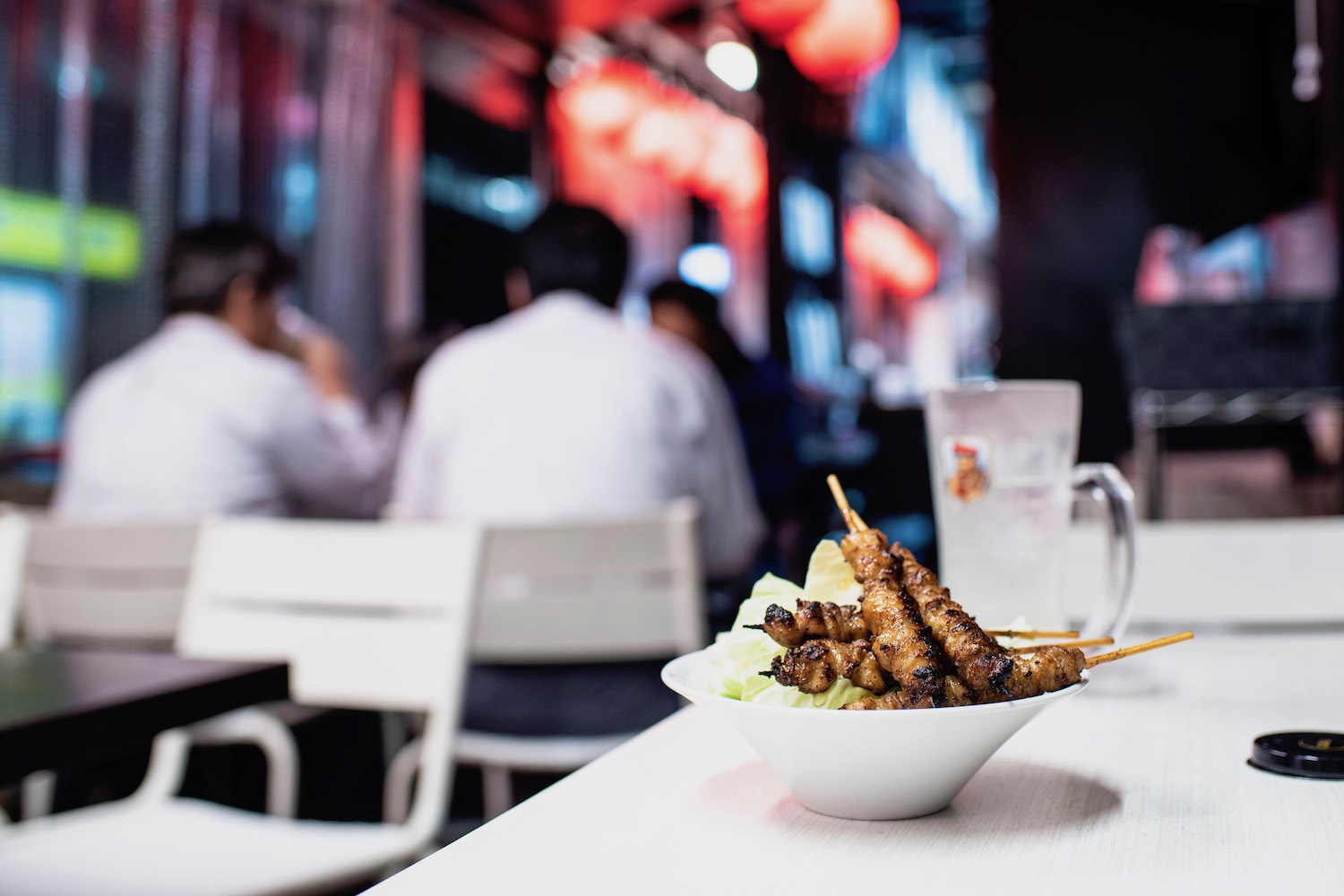 Just as I had only gotten a small glimpse into the sort of partnership I could’ve had with he-who-shall-never-be-named-on-this-blog before I torpedoed our doomed boat and swam to shore, I could only barely make out Karatsu Castle through the proverbial jungle that completely enclosed the observatory. Like Stevie Nicks I climbed a mountain and I turned around, though I thankfully caught myself before the loose dirt under my feet gave out—landslides don’t pair well with colorful outfits.

You’re reading between the lines correctly: I’d started obsessing a bit (or at least fixating, and certainly not living in the moment) by the time I headed back east from Karatsu, ultimately bound for Dazaifu Tenmangu Shrine just south of Fukuoka’s city center. The long nap I enjoyed en route reset my brain a bit, thankfully, so by the time I arrived at Tenjin Station to transfer to the Nishitetsu Line, I was more focused on the task at hand.

The colorful facade of the dramatic gate that led to shrine was impressive—it was uplifting even, especially in the warm light the sun during the golden hour was casting on it. The dormant iris pond just to the southeast seemed to hearken back to the wisteria far past its prime earlier during the day.

But I didn’t allow myself to think too much about my time at Karatsu Castle, or anything further back than a few minutes in my past for that matter. I was eager to get back to Hakata and wash down yakitori skewers with a lemon highball, and to continue moving forward as I used to do before I made the mistake of falling in love the last time.

Other FAQ About Karatsu Castle

How do I get to Karatsu Castle?

You can actually reach Karatsu Castle directly from Fukuoka, by staying on the subway past its western terminus—this train eventually takes you to Karatsu. Beyond this, there are some buses from Hakata Station to Karatsu, although I tend to prefer the train.

Karatsu Castle is one of my favorite day trips from Fukuoka, in spite of the fact that this reproduction is not one of Japan’s “original” castles. I also love to visit Daizafu Tenmangu, a Shinto Shrine about an hour south of the city center by private railway.

Is Karatsu Castle worth visiting?

Karatsu Castle is worth visiting, if you keep in mind that this fortress (in spite of being beautiful and picturesque, with its location right on the sea) is not one of Japan’s 12 “original” castles. Combining a trip to the castle with a hike on offshore Takashima island hammers this home.