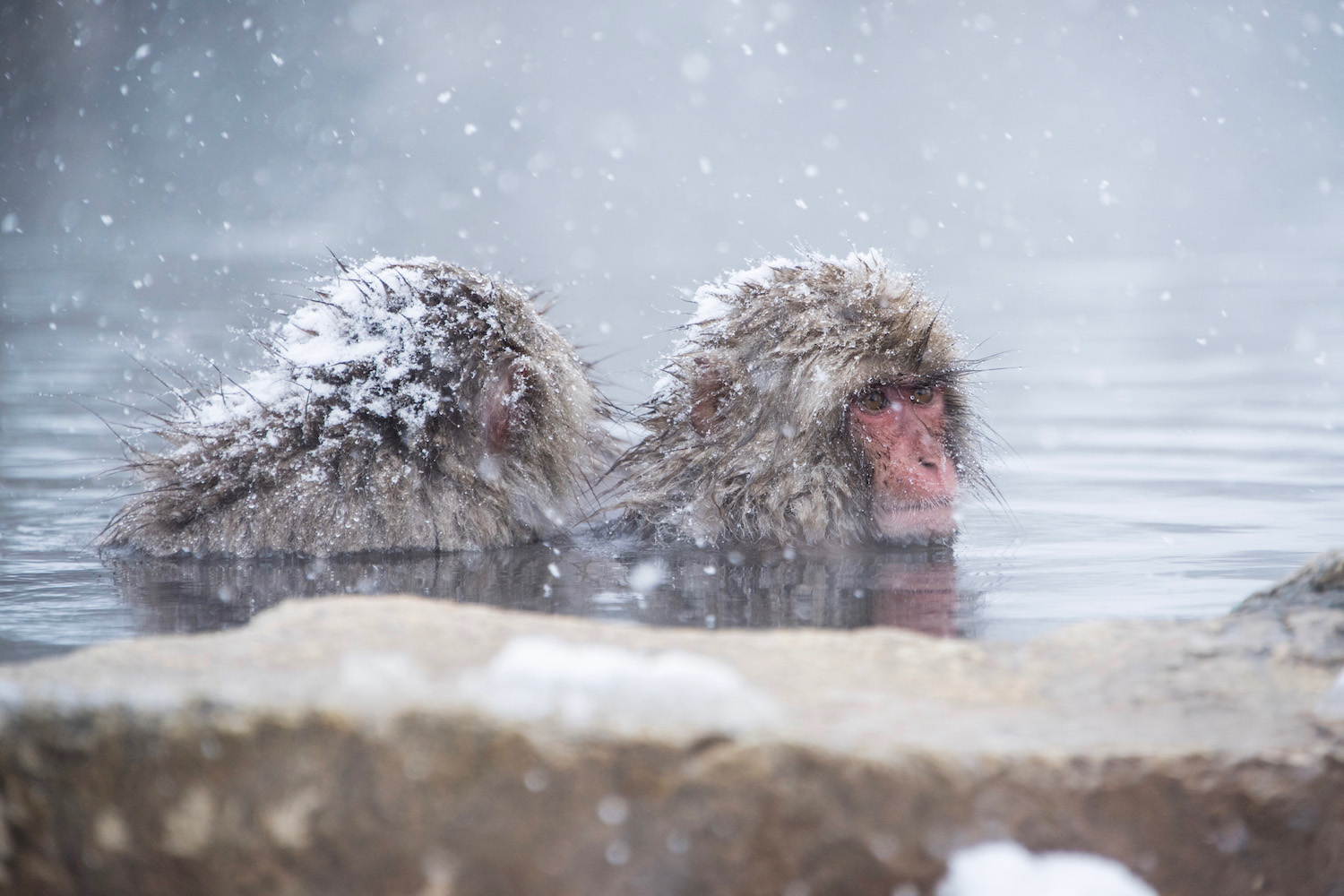 Have you ever returned somewhere after so long it feels like you’ve never been? This contradiction defined my second trip to see the Japan snow monkeys near Nagano earlier today.

I first saw them five years ago, during my first trip to Japan, in mid-April when nearly all the snow had melted. It was a different season then—I was a different person then—but at moments it felt like more was at play.

The Arrival of Winter

My first inkling about this came in Nagano, a city that has never done much to inspire me. 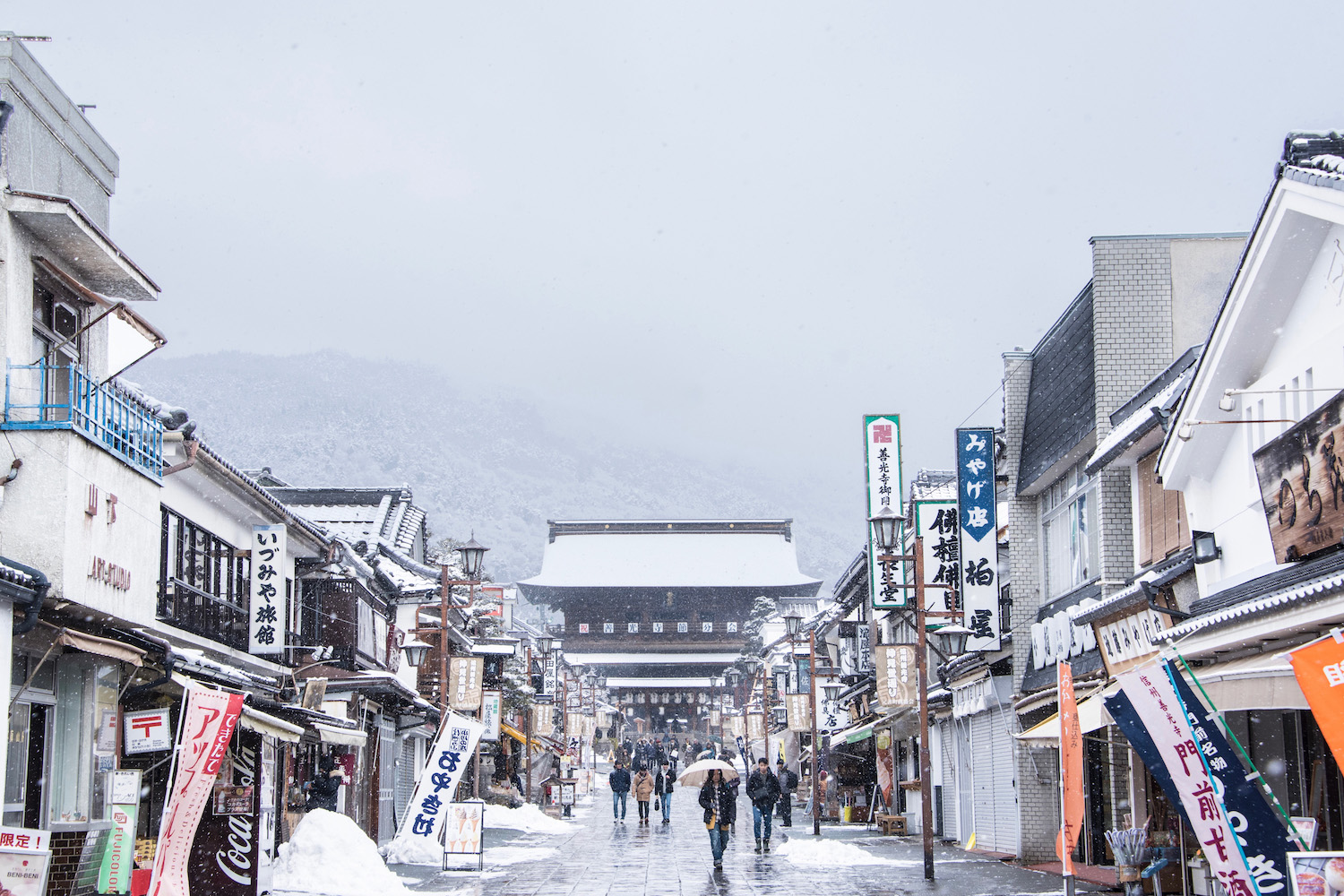 After buying my pass to visit the Japan snow monkeys (as well as an onward ticket to the castle city of Matsumoto, where I’d be spending the night), I made my way to Zenko-ji, a temple I never previously would’ve placed among the best in Japan, even though it’s certainly important—Nagano was literally built around it. I’d have an about an hour to get back to the station to catch my bus, though as the temple became visible during the last couple hundred meters of my walk northward along Nakamise Dori, I doubted I’d need even half that long.

And then I passed under the gate. 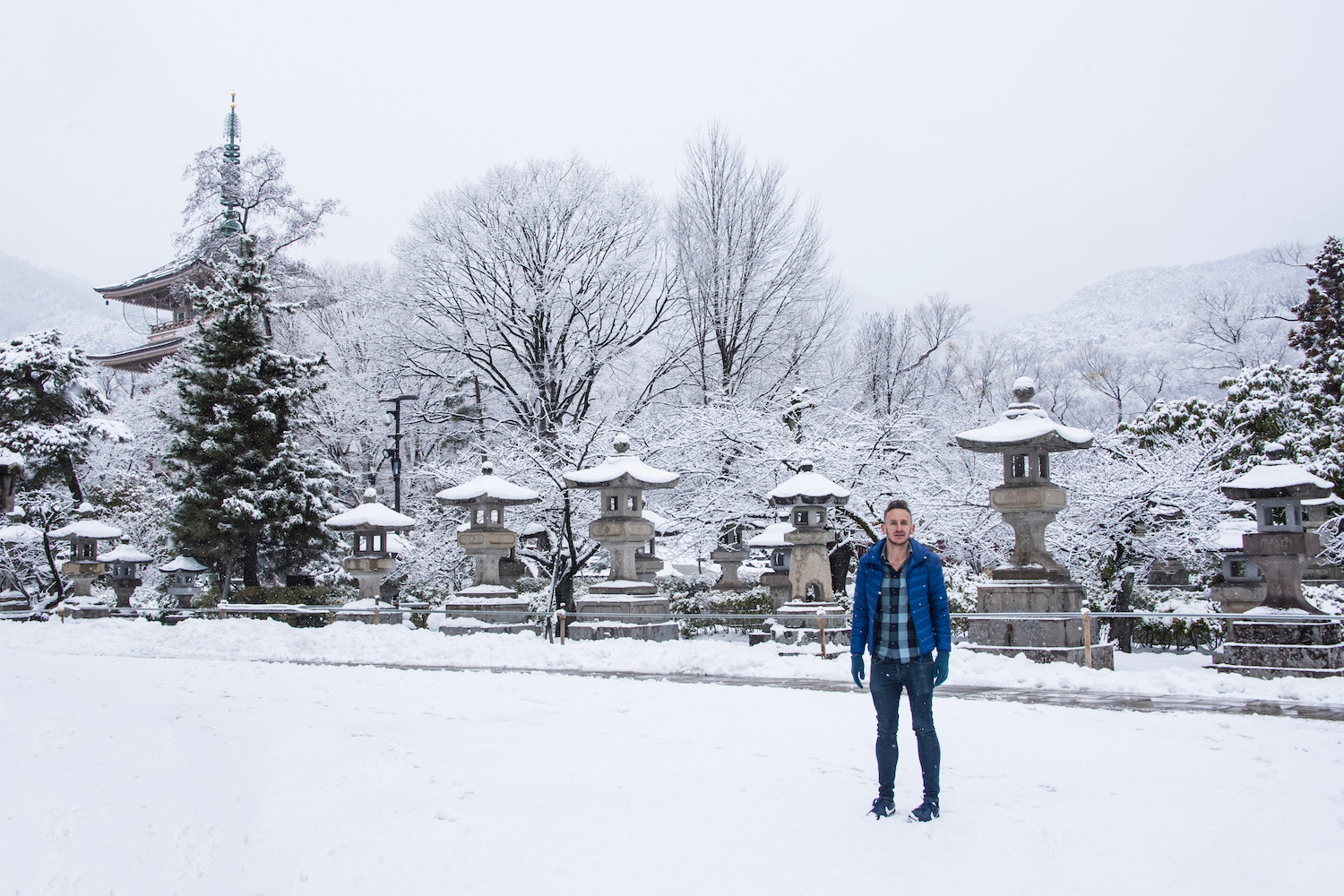 Which is not to say that anything metaphysical happened—I don’t believe in that sort of thing, frankly. But whether it was the red-capped Buddhas under canopies of snow-dusted pines, or Tadashi Nihonro pagoda (which was actually built hundreds of years after the main hall) rising behind the main hall, seemingly an extension of the frozen landscape around it, like the place where a Yukio Mishima novel reaches its climax, the arrival of winter (well five winters, since the last time I was here) changed this place.

It was my second time to see the Nagano snow monkeys, but it felt like my first—among other reasons because snow was actually falling this time. To say nothing of the several inches of it already on the ground. 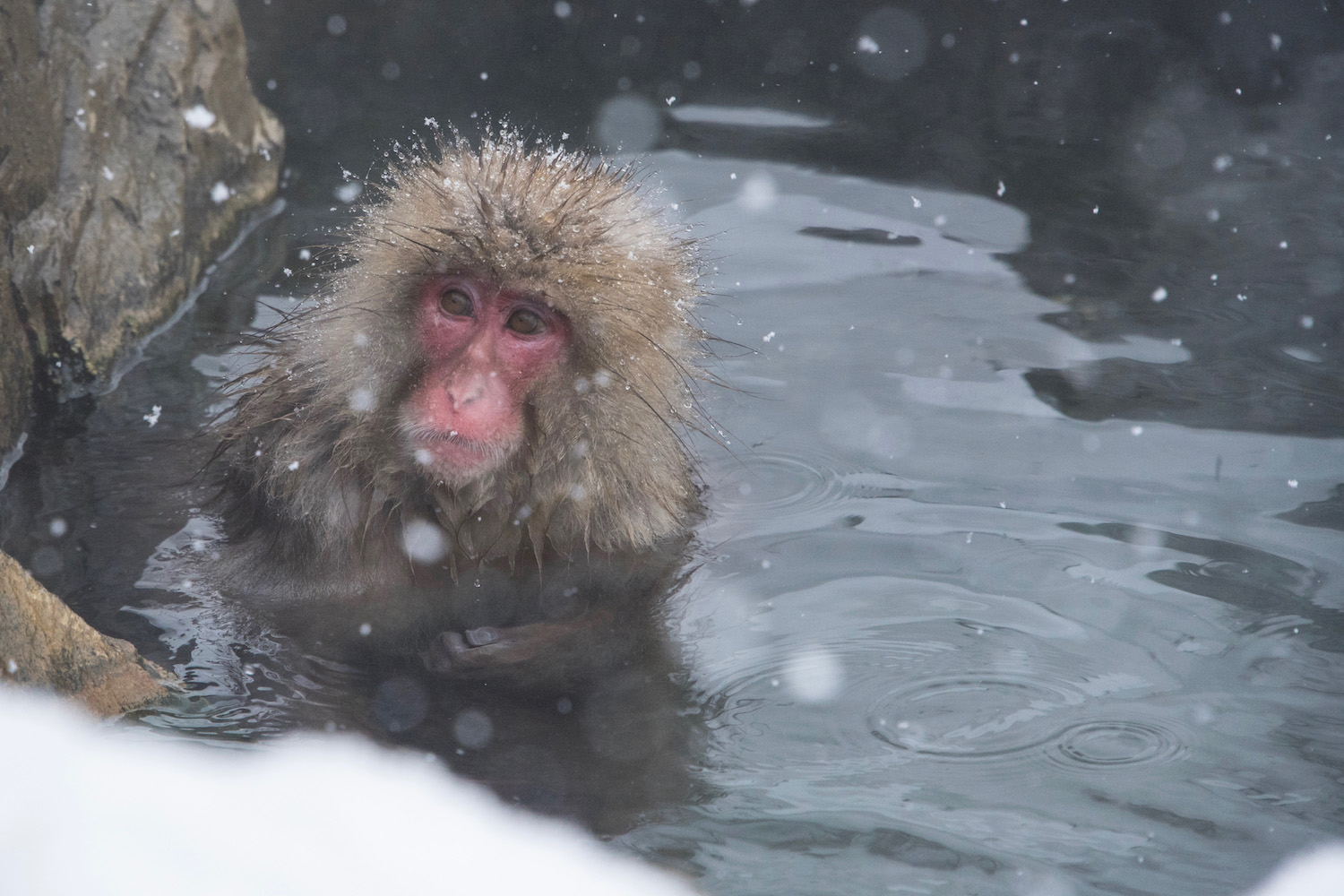 Having opted not to drop a hundred bucks on one of the few pairs of snow boots I could find in Bangkok, nor to rent a pair at the entrance to the Snow Monkey Park, I was defiant as I began walking up the 2,000-meter path to the red-faced macaques, which with only a couple of exceptions proved far less slippery than the signage warned.

The trail felt flatter than I remembered, in general. Neither of the two staircases at its beginning or end required any exertion to scale, which meant that it too me less than 30 minutes to reach Nagano’s proverbial Hell Valley. 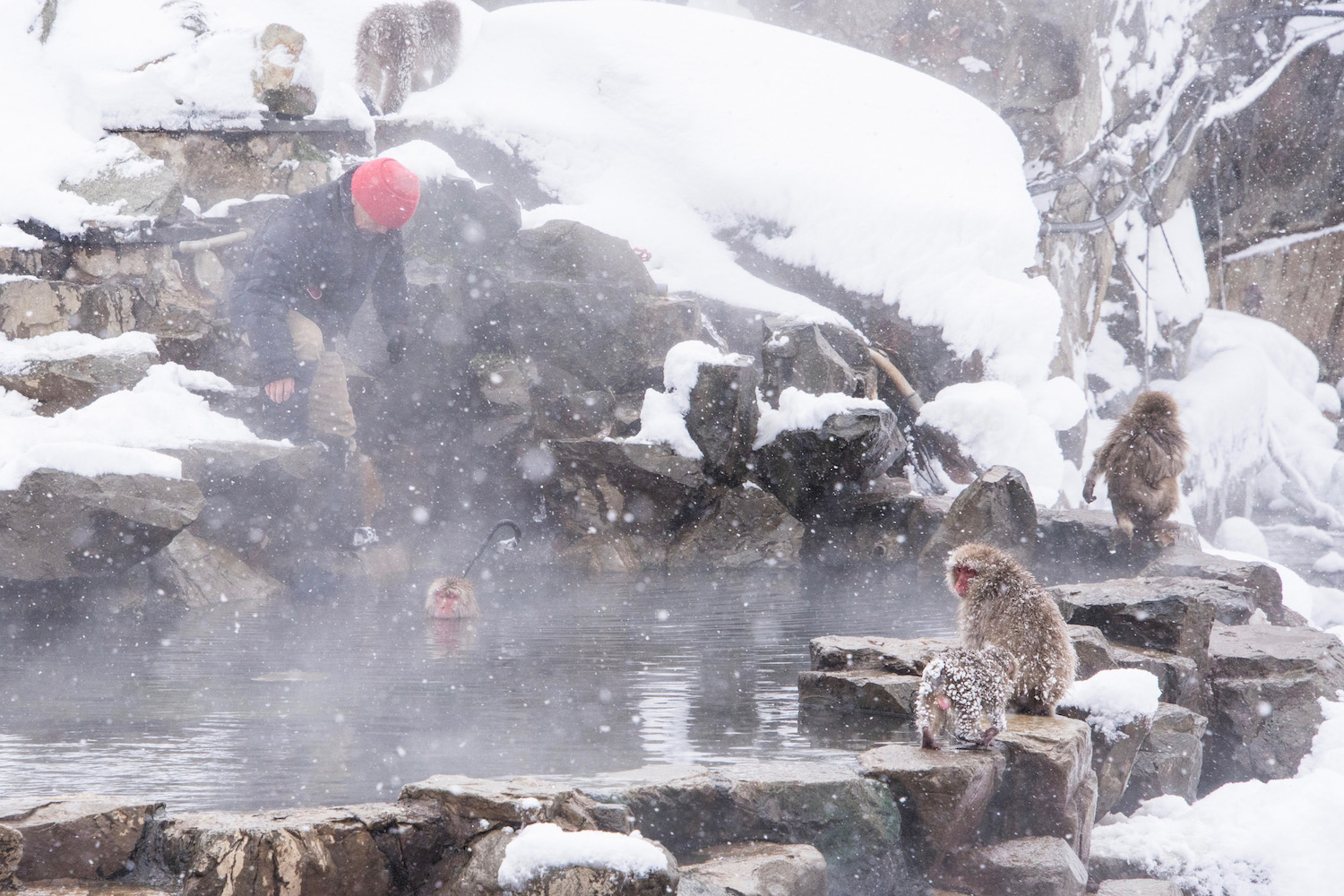 Even once inside, however, the scene seemed unfamiliar. Among other reasons because all the Japan snow monkeys were swimming in an onsen that appeared to have moved to another location entirely since the last time I was here.

When Snow is Falling

Like Kyoto during sakura season (or autumn, as I more recently experienced), Jigokudani was a mob scene on the fourth Tuesday in January. In addition to no fewer than three dozen young couples, often accompanied by children and at least one of their own parents, there were around 25 photographers, whose 600mm lenses and the camouflage tape hastily plastered on them suggested they were much more professional than I imagined their photos would indicate. 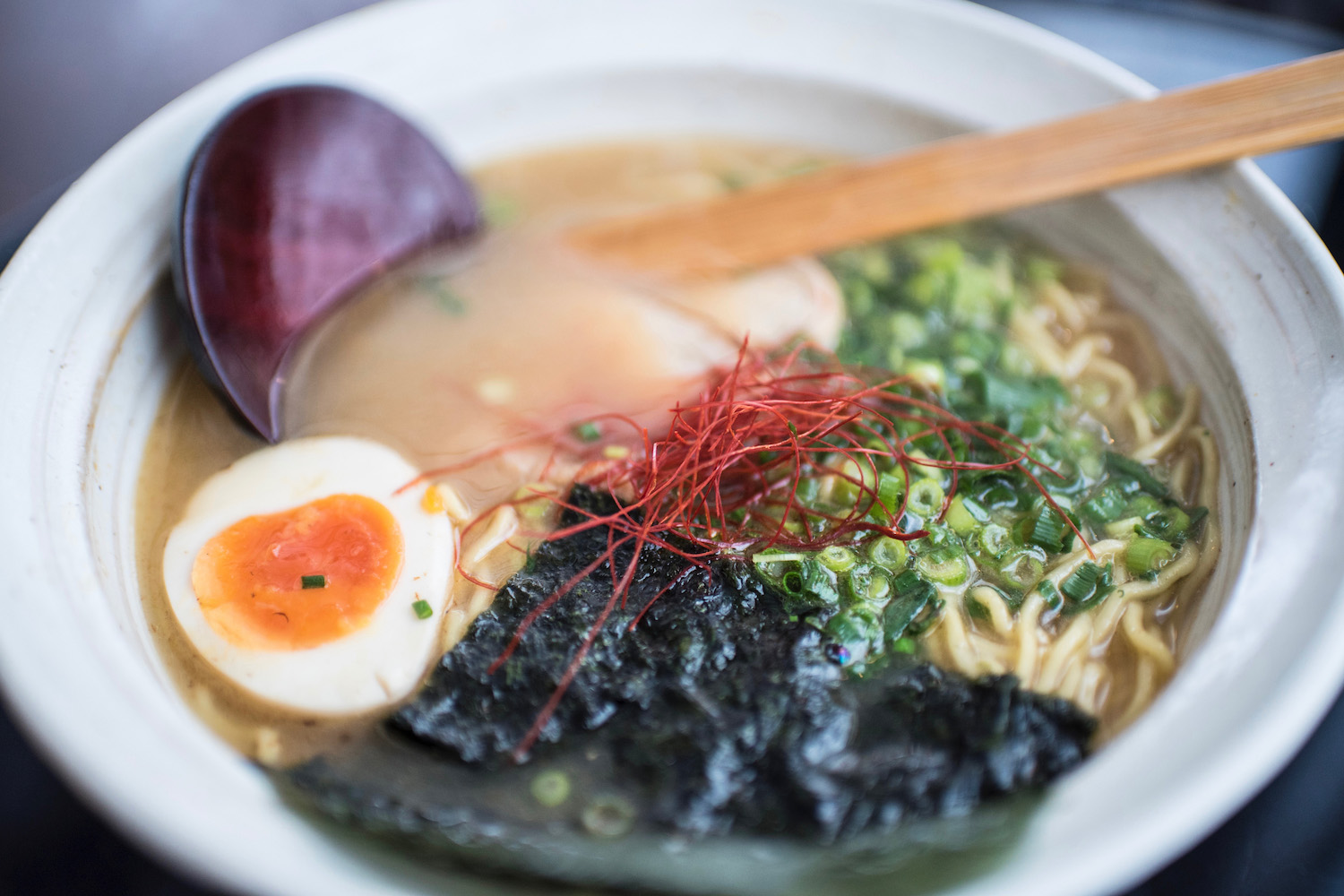 I’m not judging or throwing shade when I say this. God knows I thought I was big shit last time I was here, even though I hadn’t even managed to come during the right time of year. In neither instance had it made any difference to our rosy-faced cousins, who went about their business (bathing, picking vermin off one another and even having sex) as it we literally weren’t there.

To be sure, my second experience with the Nagano snow monkeys also nullified the first in a literal sense. Even if the pictures I took this time has been as poor in quality and limited in imagination as the ones from five years ago, there is no comparison between the way the macaques look when snow is falling (and it was falling hard the second time I visited) and how they appear at any—all—other times of year. 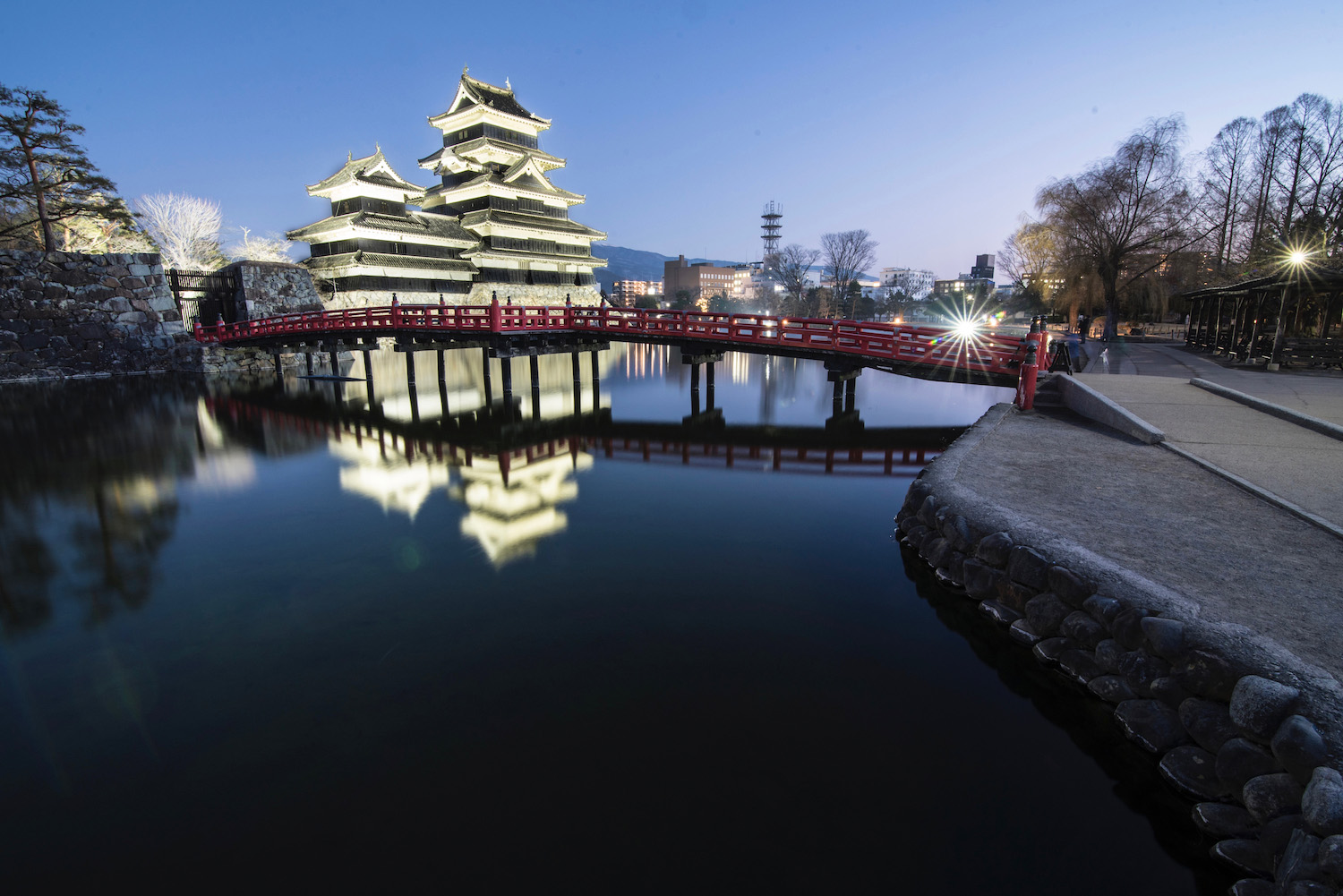 After I finished with the monkeys, I made a brief lunch stop at Enza Cafe, whose layout and size was different than I remembered, to say nothing of how certain I was that the miso chicken ramen and the apple soft cream I ate had not been on the menu in 2014. The clouds cleared as my bus re-entered the city limits of Nagano. I wondered what the sunset would be like.

Silent in the End

The sky looked like it was going to blaze magenta over Matsumoto, a city where I’ve based myself more times than I can count, but it faded to gray-blue faster than I could lose hope. As I approached the 17th century castle, one of the few in Japan with its original keep still intact, I heard a sound that is now ubiquitous to me, that would’ve been completely foreign in 2014: Every single one of the photographers waiting for the castle to light up was speaking Thai.

I considered for a moment saying something to one of them—to all of them—in my now-second language, but decided to stay silent in the end. I didn’t have a good reason (or any reason) for doing this, but as the Japan snow monkeys reminded me today (and indeed, five years ago) primates do what they want because they want it—not because they should.

Other FAQ About Japan’s Snow Monkeys

Where can I see snow monkeys in Japan?

Japan’s snow monkeys are located at the end of the Jigokudani (Hell Valley) hiking trail, located in Yudanaka Onsen in Nagano, Japan. To reach the trailhead, ride a Nagaden bus or train from Nagano Station. Note that since Nagaden is privately operated, you can’t reach the snow monkeys using a JR Pass.

Are Japan’s snow monkeys worth visiting?

Japan’s snow monkeys are definitely worth visiting, particularly if you manage to see them in winter when the snow is falling. Do keep in mind that these are wild animals; you shouldn’t taunt them or get too close. Likewise, you should absolutely not attempt to get in the onsen yourself. The water is more than 50ºC and will burn your skin; it is filled with monkey feces.

Can you see the snow monkeys in summer?

In spite of their name, red-faced macaques (aka snow monkeys) can be seen in Jigokudani all year round. However, if you’re looking for the “money shot” of their red faces contrasted with white snow or the steam rising from the onsen, you really have no choice but to visit in the very cold months of January or February.