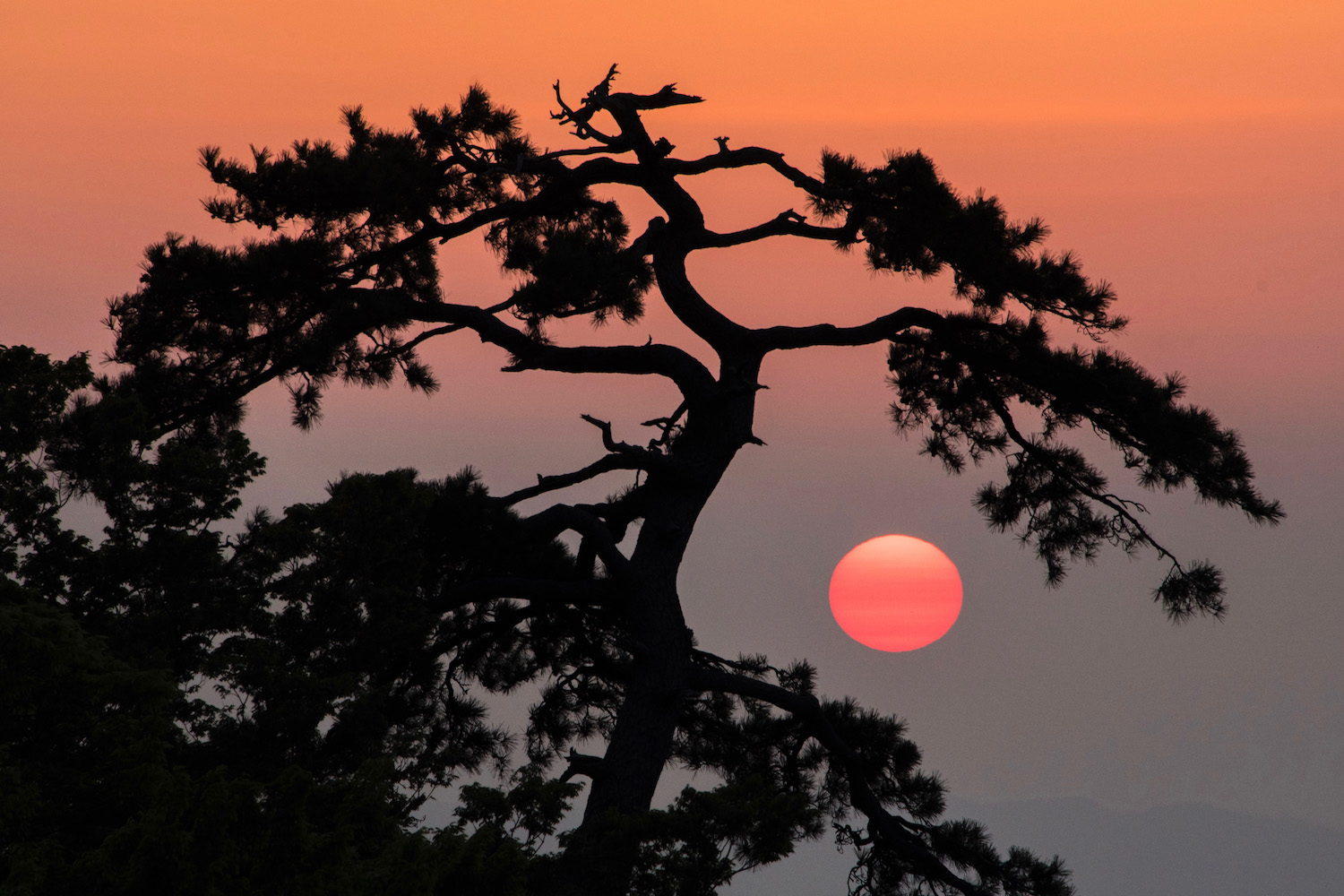 As I departed Yonago Station on a half-empty bus Tuesday morning, Mount Daisen looming under a fringe of clouds in the distance, I remembered the first time I learned of the peak’s existence. It was late last year in Bangkok, during a meeting with a Japanese friend who’d recently re-patriated herself from the Thai capital to her hometown of Kobe, at an upmarket wine bar so close to the city’s only remaining slum you could smell it.

I’d expected to meet Eriko alone, but she was accompanied by a woman I’d never seen before. And though we of course chatted about what had gone on in both our lives since Eriko’s unexpected departure, the encounter felt more like a business luncheon than a date with a longtime friend: Her companion owned accommodation at the base of a mountain near Tottori Sand Dunes and seemed to want my help promoting it, though she didn’t explicitly ask me to do so.

The tone and tenor of the meal puzzled me for the rest of the day, but I didn’t feel particularly inclined to accept the woman’s not-really-an-offer. When the seeds of my desire to visit San’in began germinating sometime around late February or early March—Daisen, it turns out, is one of the main attractions of the region—it dawned on me that I had perhaps been too dismissive.

To be sure, when I disembarked the bus at the Daisen-ji bus stop (which is actually about a kilometer away from the 13th-century temple of the same name), I wasn’t bound for Eriko’s friend’s place. Still embarrassed about how little mind I’d paid the idea of visiting Daisen when we met months earlier, I didn’t dare reach out to her. 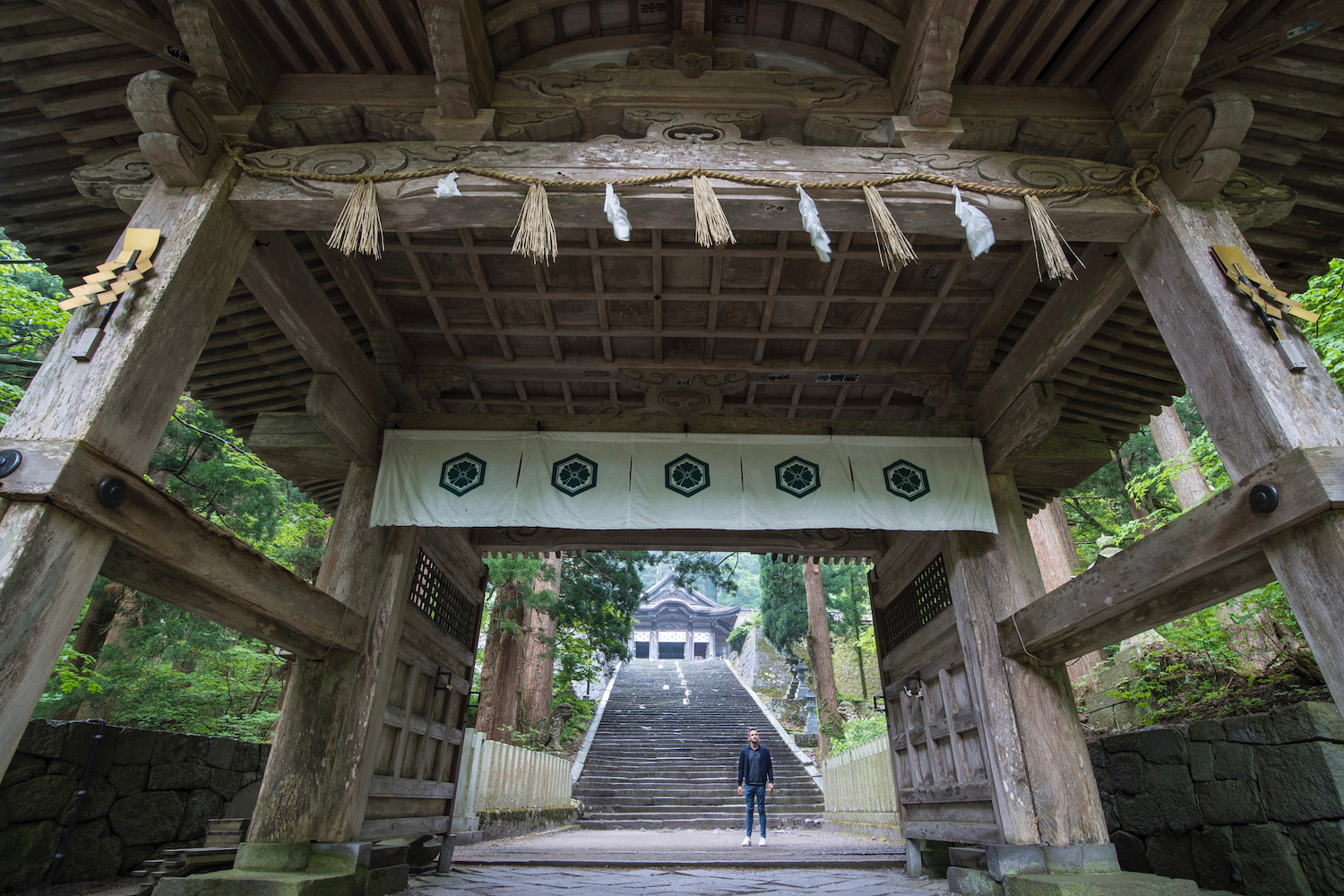 Rather, I was headed for a guesthouse I’d found on Airbnb, owned by a woman whose energetic kindness did more to wake me up than the matcha she offered me upon sitting down. “Give me a few minutes to prepare your room,” she half-apologized, leaving me with an overflowing bowl of mochi snacks to graze on while she was poised to offer something few other Japanese accommodation providers do: Early check-in.

Mount Daisen, Hiroko explained to me after I dropped my bags in the dorm room I’d accidentally booked instead of a private one (Unfortunately, she’d said, clearly unaware of my mistake, no other guests are staying with you tonight), would probably be hidden from sight the rest of the day. As a consolation prize, however, she offered to drive me to a short hiking trail on the back side of the mountain later in the afternoon. 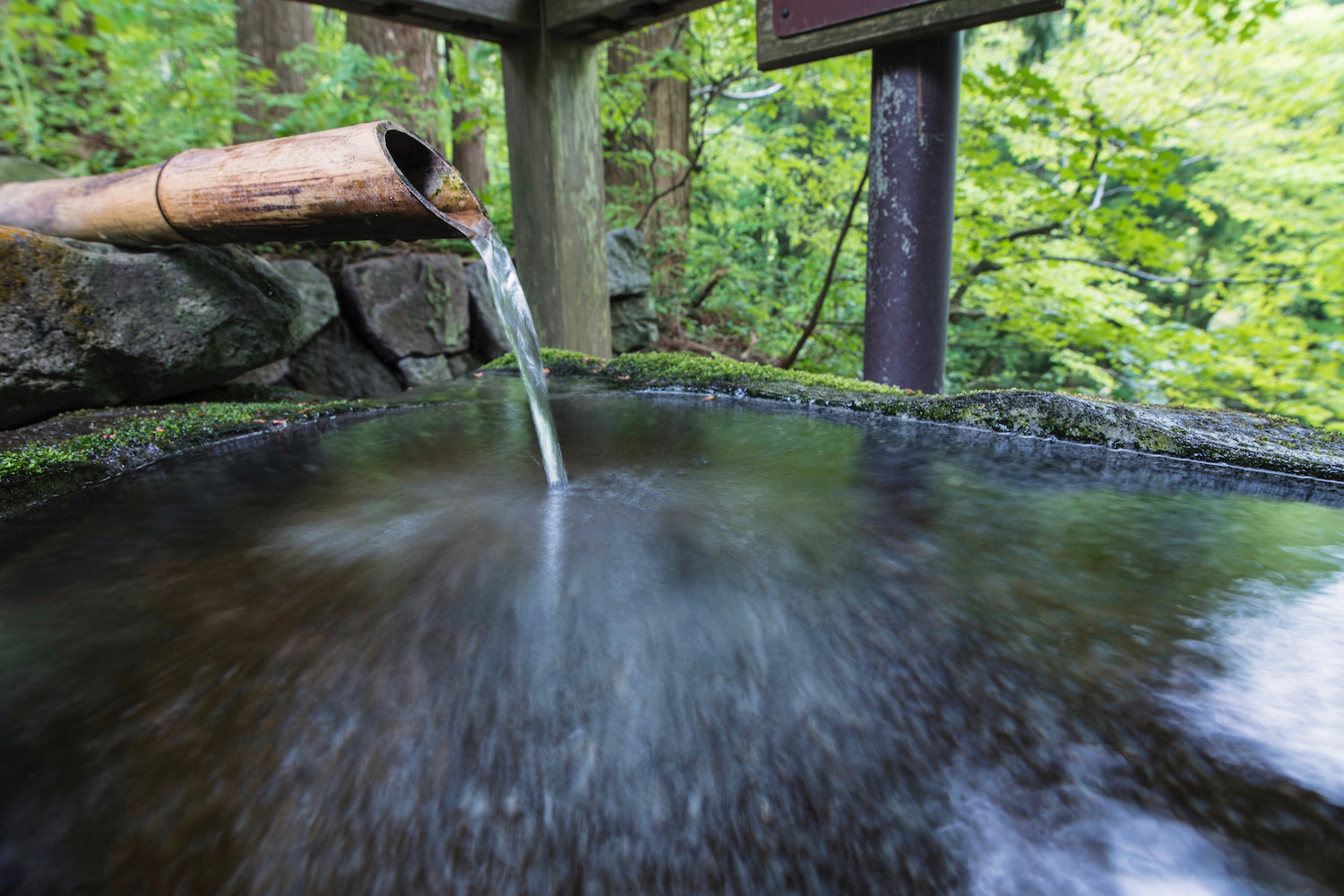 “While I continue cleaning,” she said, without even the slightest hint of self-pity. “For now, you can go and see the temple.”

Aroma of the Downpour

Before I left her to her domestic duties, Hiroko had remarked that unlike most of the rest of Tottori, Daisen was still in its first real days of spring. This was evident in the particular shade of green the profusion of leaves covering the mountainside gave off, and though I agreed with her, she expressed hesitation about the sentiment she wanted to express not having an exact translation from its original Japanese. 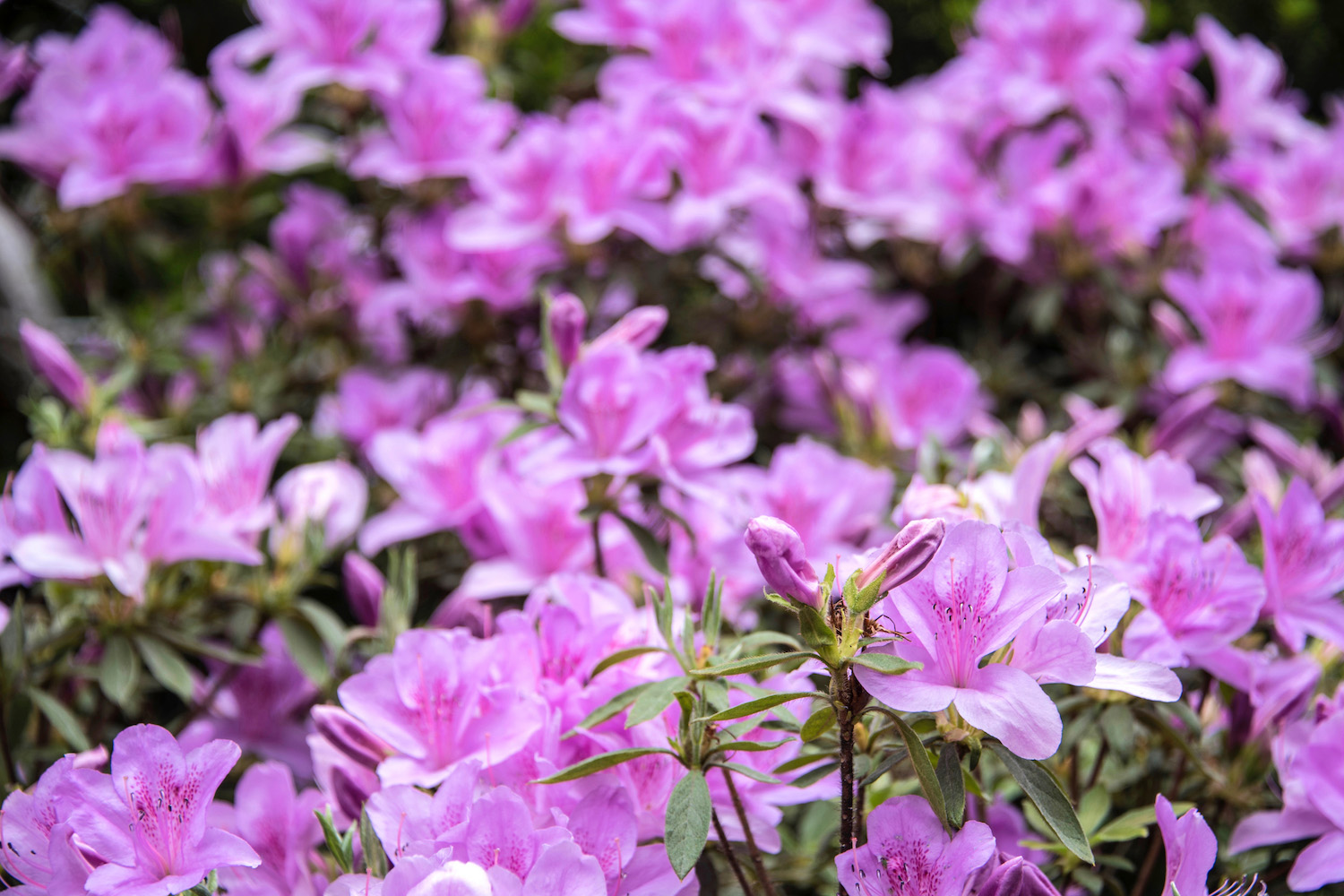 This color—I called it “emerald” when Hiroko had been looking for the right word, but that’s not quite accurate—added to the otherworldly feeling of exploring Daisen-ji. The grounds were to be completely empty apart from three monks (one burning some wood just outside the main hall, and two more at Ogamiyama Shrine scolding visitors when they tried to photograph its interior) and a handful of Japanese tourists.

Mt. Daisen was trying its best to peak out from behind the condensation—perhaps the periodic ringing of Daisen-ji’s bell was scaring it? On my way up to Ogamiyama I’d passed a water purification basin whose steady stream melded perfectly with the singing of some frogs nearby, which made me realize that it was probably going to rain soon. 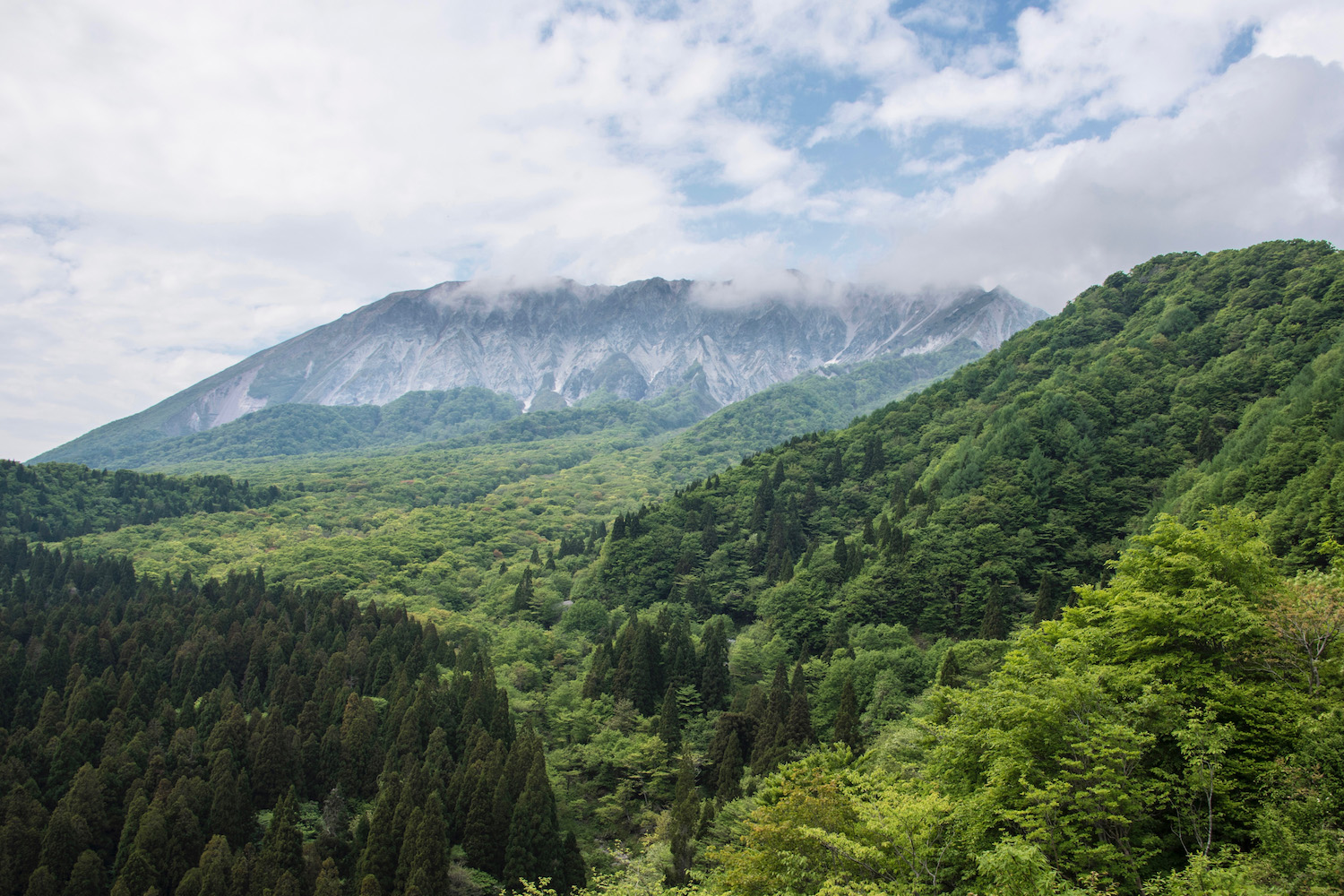 I smelled the coming deluge a few moments before I felt the first drop on my head, which was right around the time I reached the shrine at the top of the stone staircase. As I sheltered myself under the entrance gate, which I assume was built from the cedar forest into that rises around the sacred complex on all sides, I savored the aroma of the downpour—though, like Hiroko, I lacked the language to describe precisely what it evoked in me.

By the time Hiroko and I (and a friend of hers from Okinawa) reached the Kakikage viewpoint to enjoy our view of Mount Daisen from the south, the fog stuck to its summit all morning had been to peel away, revealing pieces of a sky somewhere in color between cerulean and cobalt. The expansive forests before us gleamed that color Hiroko still couldn’t describe even more intensely, with microbursts of magenta from azelea bushes scattered throughout. 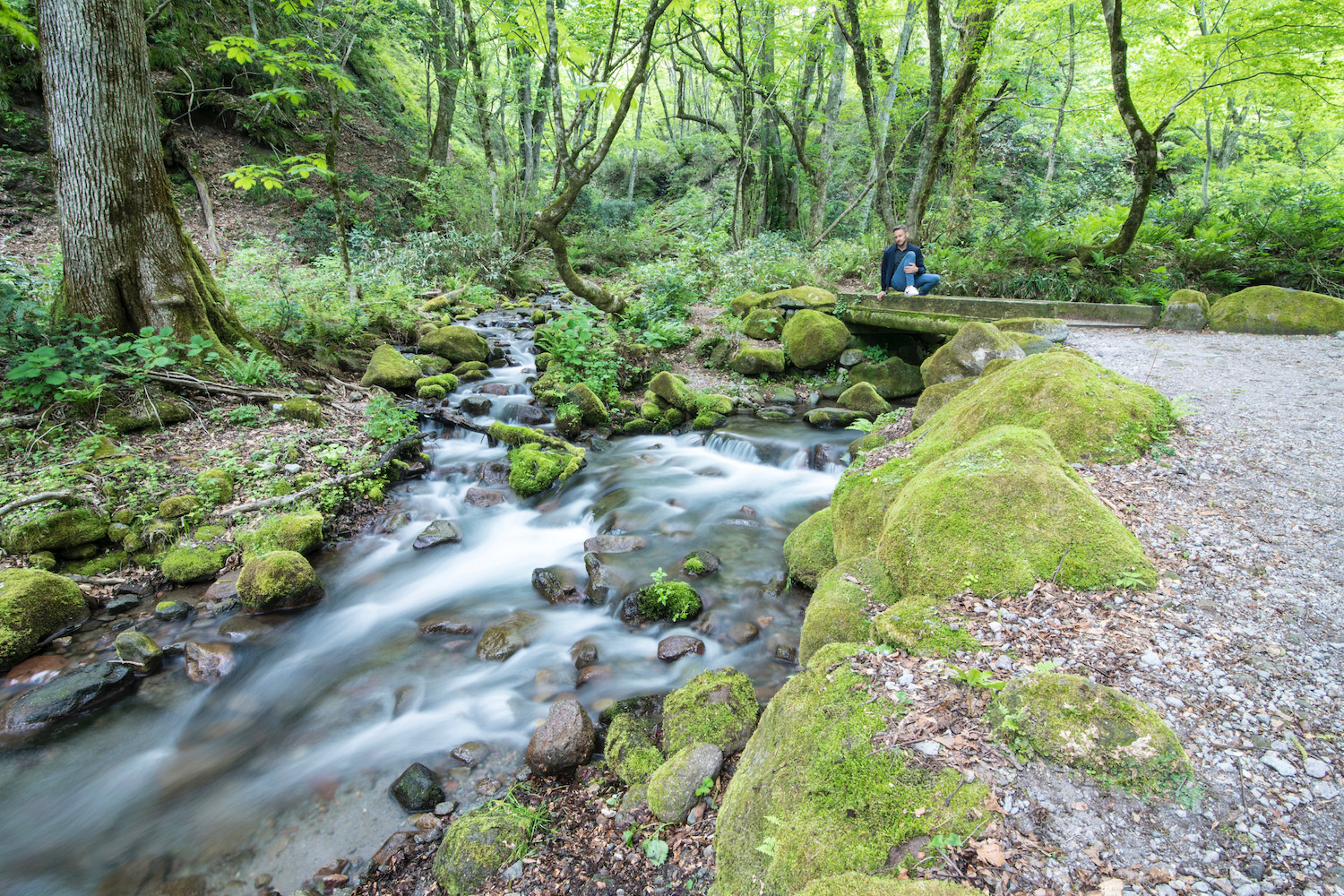 Initially, Hiroko said she had simply planned to take me (and her friend) to a humble (but utterly enchanting) trail, which to me evoked the scenery of Oirase Stream in Tohoku region. However, when we returned to the car after our short sojourn (and a surprise encounter—a stand of septuagenarian group tourists was entering the scenic area just as we were leaving it, apparently as a result of a popular drinking water commercial filmed nearby), I quickly noticed that we weren’t returning home.

“The waterfall I’m taking you to isn’t one of the top things to do in Tottori prefecture,” Hiroko half-warned as well neared its totally empty parking lot. “But I think you’re still going to enjoy it.”

In fact, the cascade was close to forgettable, though I didn’t have the heart to tell Hiroko. Upon our return to Daisen town, Mt. Daisen was colored purple as a result of the salmon sun sinking into the Sea of Japan before us, flanked by the peak of Yugimahama Peninsula on the right, and a twisting kuromatsu on the left. It was probably the most beautiful sunset I had ever seen in Japan.

My trip had already fully satisfied me by the time I awoke this morning, but I still wanted to summit Daisen. After a quick run and a visit to a viewpoint whose view had looked far more pointed in the postcard that advertised it, I arrived at the trailhead about 10 minutes before 7.

The ascent was easier than I expected, but harder that I would have admitted to any of my fellow hikers; though at least a dozen of them had headed up before me, I managed to reach the summit first, at around 8:15. After taking several dozen photos (and one of my increasingly ubiquitous panorama selfies) around the circular trail that crowns the apex, I sat beneath an expository plaque. 大山, it said, 1,729 m. 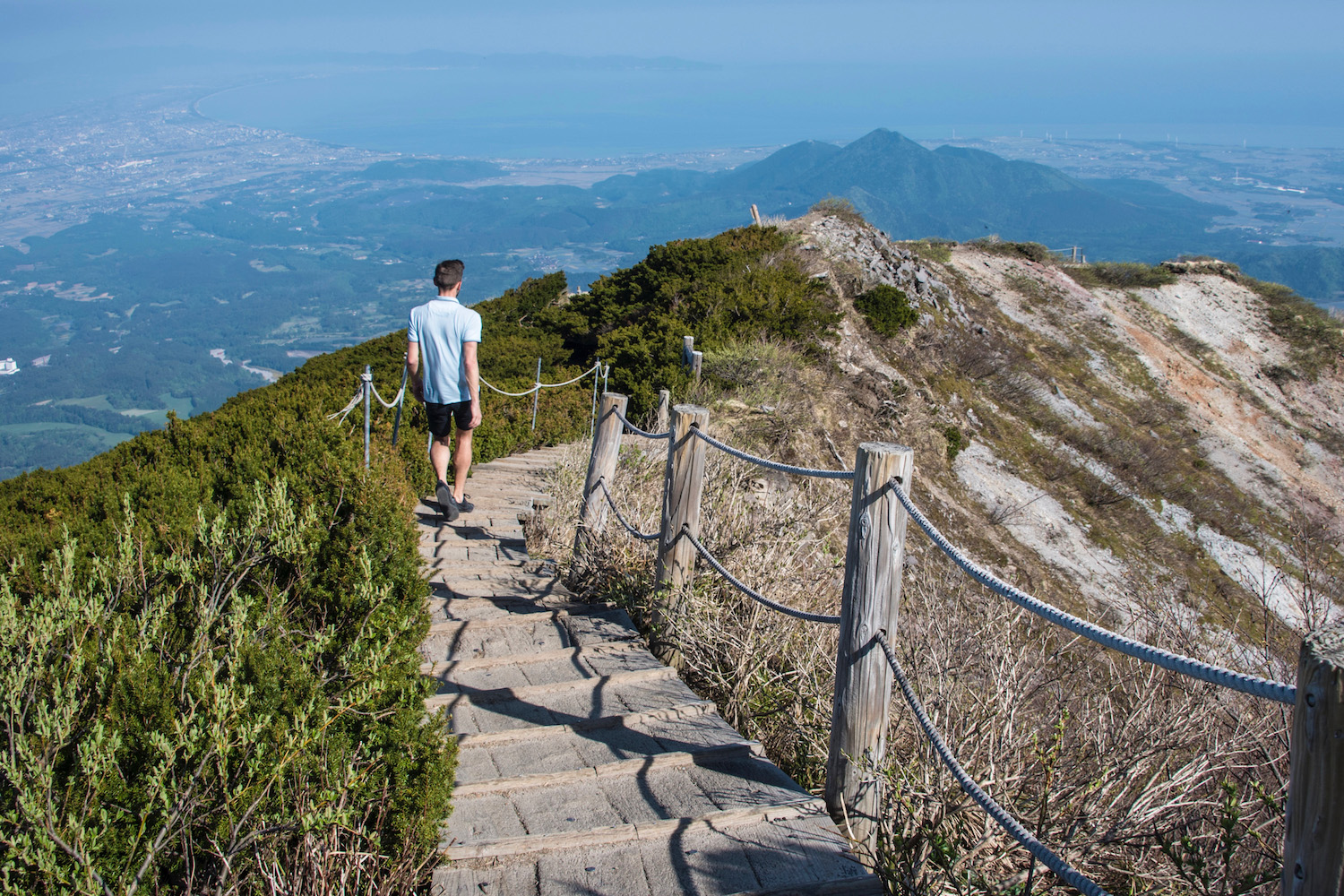 Like the green of the forests and the smell of the rain, the feeling that permeated me as I looked down onto the San’in coast from Mount Daisen transcended words (one—freezing—seemed rather obvious was my sweat cooled and my body remembered it was wearing shorts).

Although the same moment can be both a high point and an anti-climax, a pleasant day that follows a perfect one isn’t any less lovely to live through.

Other FAQ About Visiting Mount Daisen

How do you get to Mt. Daisen?

Mt. Daisen is accessible by bus from Yonago, a large city in the Tottori prefecture of Japan’s San’in region. You can also obviously rent a car and drive here from nearby cities, although the majority of foreign tourists don’t end up doing this.

How tall is Mt. Daisen?

At 5,673′ or around 1,900 meters, Mt. Daisen is relatively tall, although certainly not Japan’s tallest mountain. Due to its shape and reminiscence to a much more famous mountain, locals sometimes refer to it as “Hoki-Huji,” referring to the fact that it’s on Japan’s northern (hoku) coast and looks a bit like Mt. Fuji from a distance.

Is Daisen a volcano?

Mt. Daisen, like virtually all mountains in Japan, is technically a volcano. With this being said, the mountain has not had a major eruption in at least 17,000 years, so I wouldn’t feel too worried about going there on your next trip to Japan.