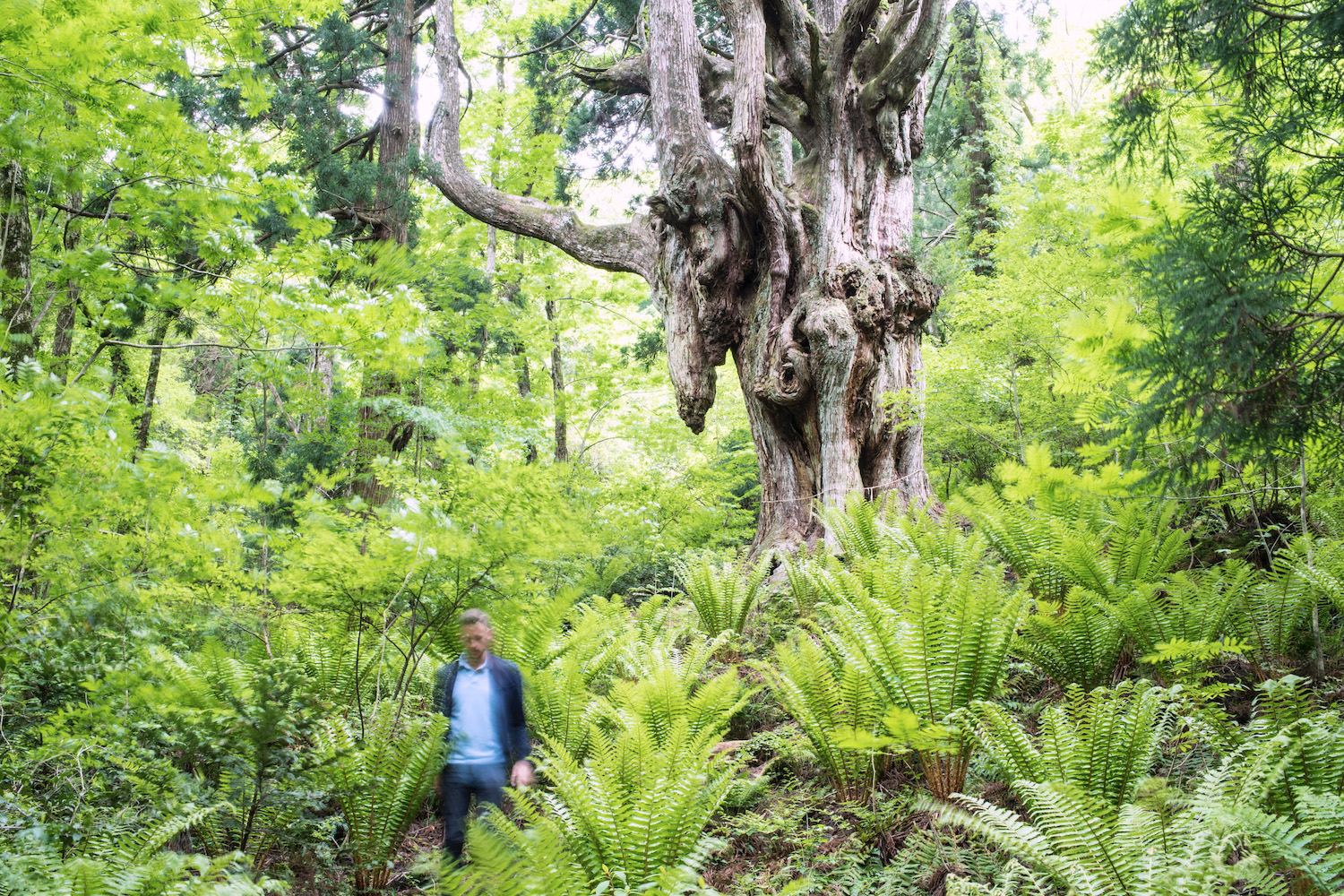 When I decided to rent a car in the Oki Islands, I wasn’t aware how many of the roads would have only one lane. As I pulled away from Saigo Port and headed toward one of Dogo Island’s sacred cedar trees, I gripped the steering wheel in terrified anticipation—another vehicle would speed around the bend, directly into me. I just knew it.

My heart jumped as I neared massive Chichi-sugi, but not for the reason I expected—the way was completely devoid of other people, in cars or otherwise. A peacock-looking bird with carmine-colored plumage darted in front of me with almost no warning. It stood there for a minute, as if it could sense my anxiety and wanted to mock it.

As I stood beneath the torii in front of the massive cedar (which, somewhat perversely, seemed to be made from one of its cousins), a vehicle zoomed past. Why on Earth would someone be driving here?, I thought as I watched its tail lights disappear in the distance.

As had been the during the rest of my San’in trip, excepting only the Adachi Museum of Art, I encountered few humans as the hours passed. One or two at Dangyo Waterfall, and of course the kind woman who served me seafood ramen inside her eccentric restaurant (which also appeared to be her home) on the island’s east coast. 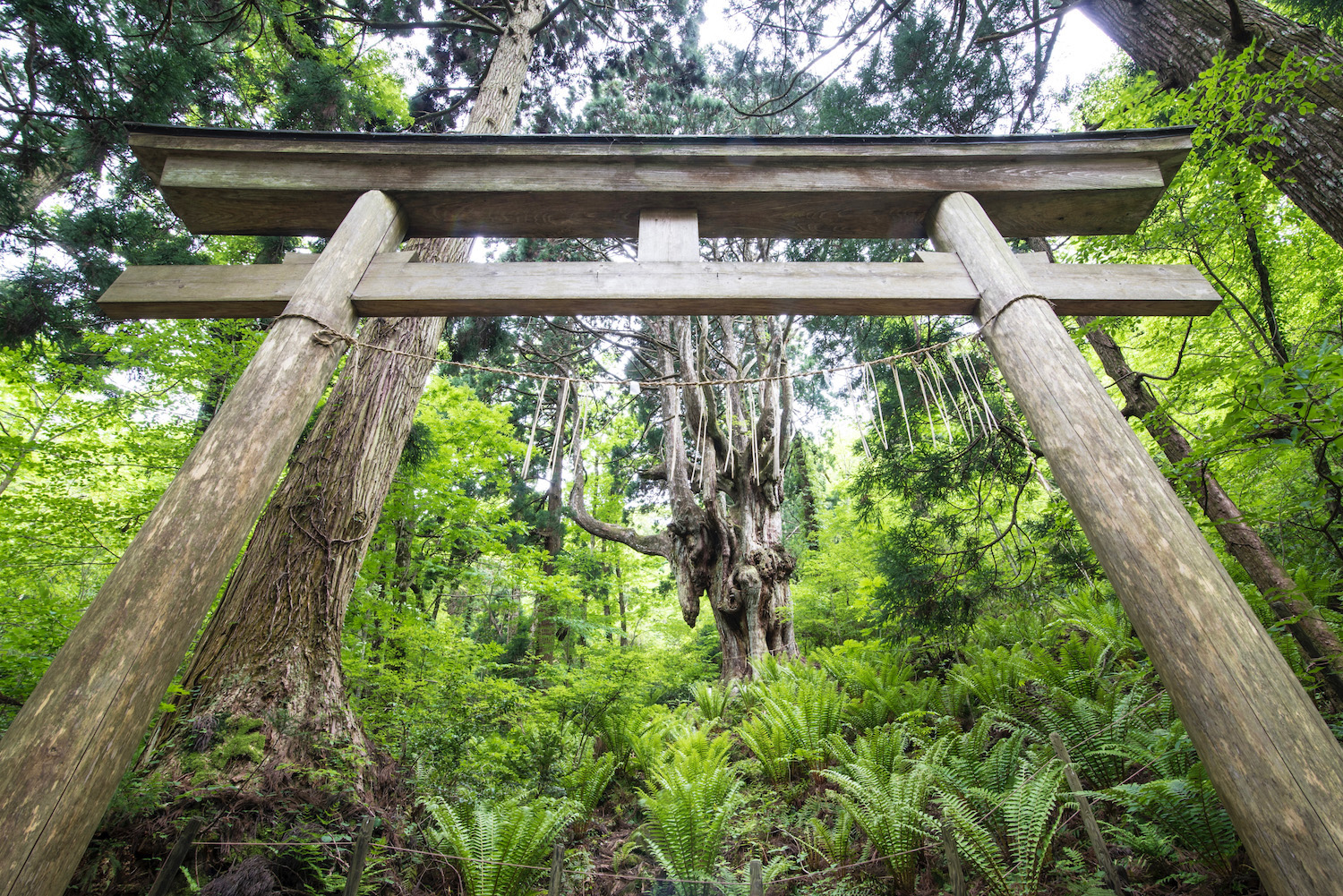 But I’d be lying if I said the scenery of Dogo Island, on its own, was special enough to have justified my expensive and somewhat complicated journey to the Oki archipelago.

To be sure, the highlight of my first day in the Oki Islands was an unexpected one. Upon arriving at Kusuburu House, my hosts Aki and Asami informed me I would be their guest of honor that evening, at a dinner a local restaurateur planned to prepare for them to celebrate their recent marriage.

The spread of seafood—sashimi, shabu-shabu, shells, oh my!—was dizzying on its own, and I didn’t know whether to feel terrified by the half-taxidermied fish staring at me throughout the meal, or charmed by the delicate iris arrangements that framed their frozen faces.

Of course, it had been the hospitality—I was treated like a superstar, even though it was someone else’s celebration—rather than the food, however incredible it was, that made my time with Aki, Asami, their friends so life-affirming. Certainly, being able to have such an intimate, personal evening with famously reserved Japanese people more than made up for the fact that Candle Rock, on account of the clouds that blocked the sky all day Saturday, looked nothing like a candle at sunset. 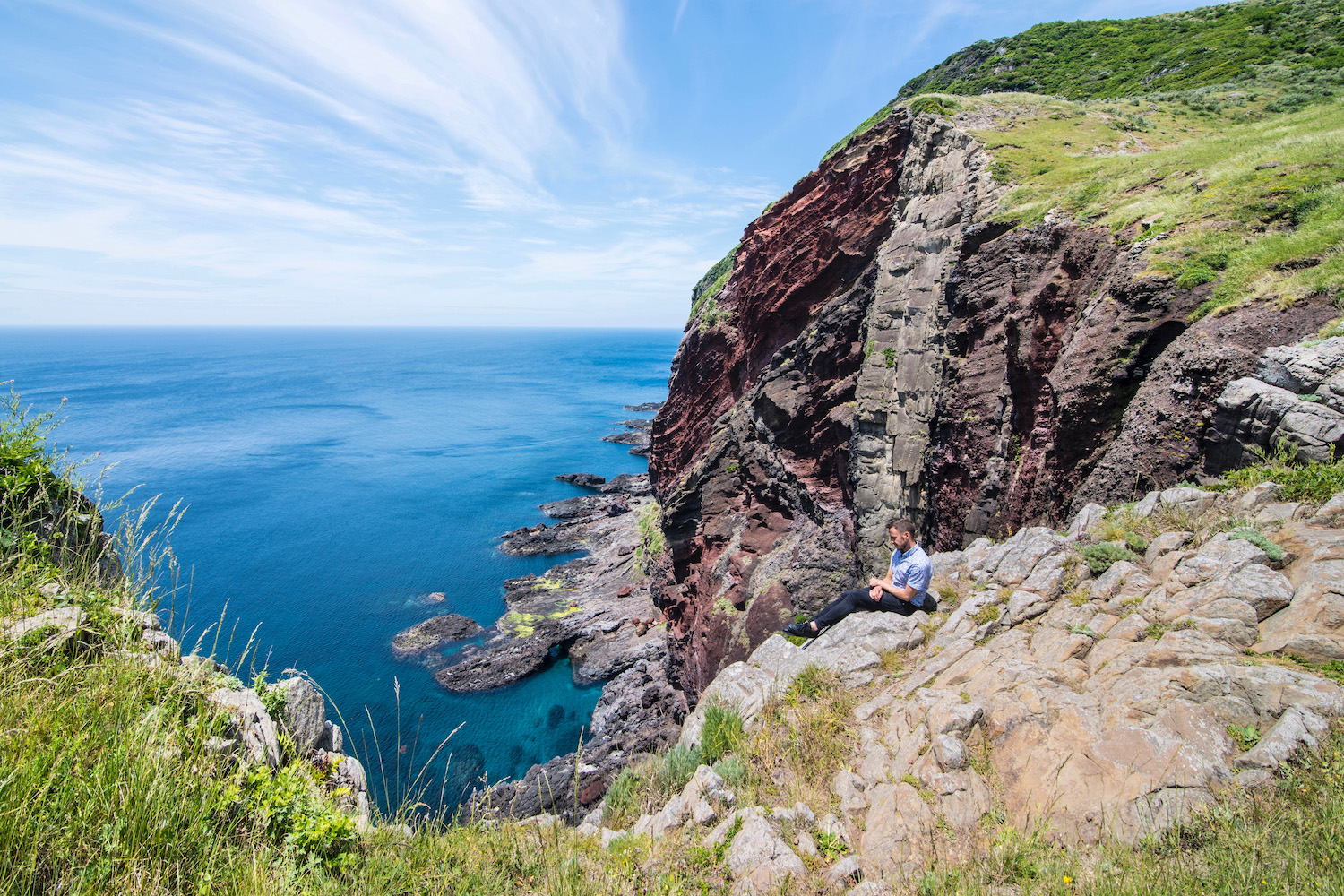 Besides, Sunday morning’s skies were blue, and although I was sad to say goodbye to my new friends, I was excited to keep exploring the Oki Islands. After returning my rental car (by this point, anticipating and dodging oncoming vehicles had almost become a thing of habit) I boarded a ferry bound for Chiburi (to which the locals usually shorten the name), which according to Aki was the wildest member of the proverbial band.

This definitely proved to be true when I arrived at the Mt. Akahage lookout, where no less than three dozen bumblebees buzzed about as if they were guarding something sacred. Ironically, they seemed disinterested in the deserted observation deck—and thankfully in me as well. 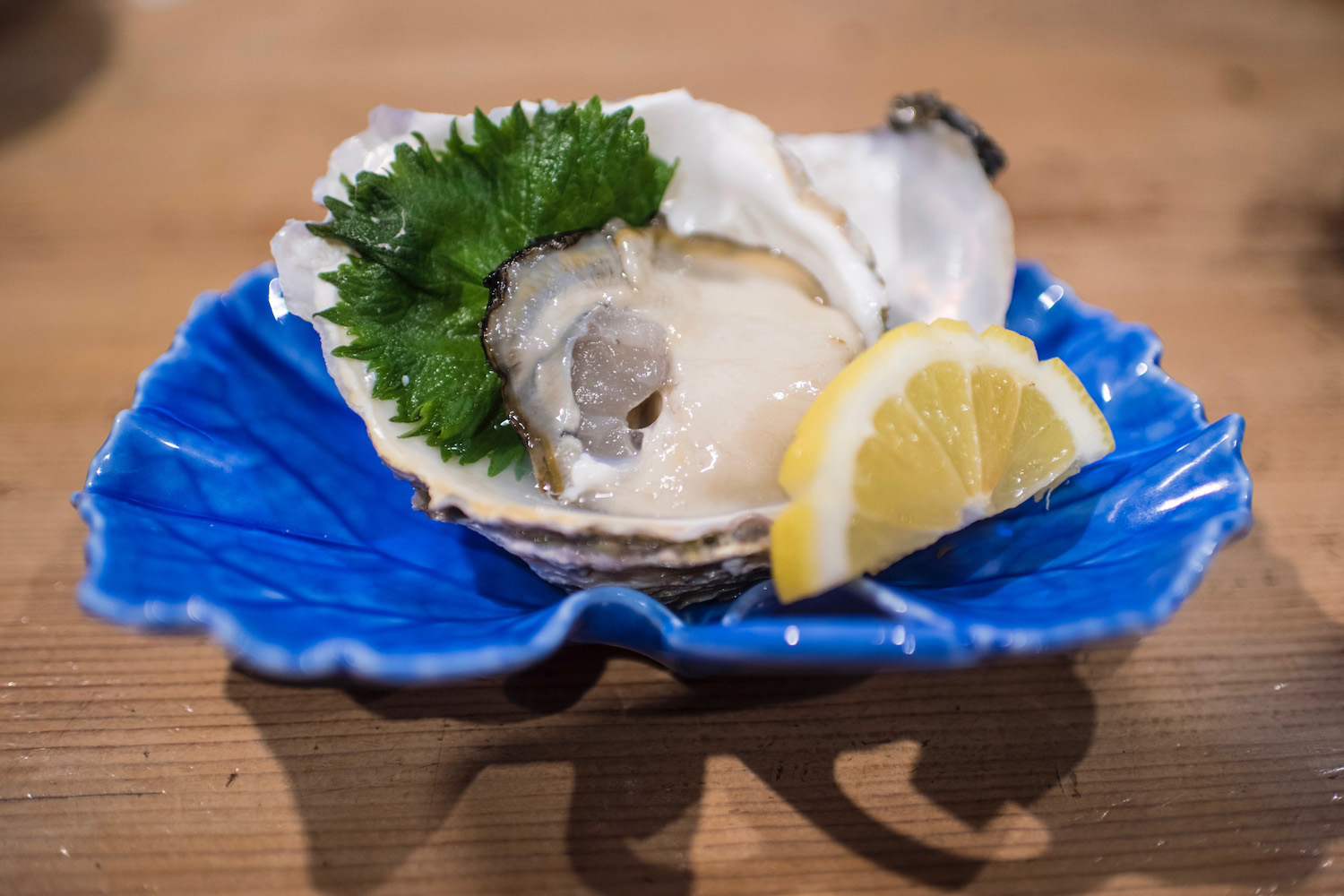 Unfortunately, however, this wasn’t the only way in which Chiburijima was wild. By the time I reached the Sekiheki Red Cliff, my eyes were so itchy and swollen from whatever allergen was wafting through the air that it looked like someone had punched me in each one of them. I was afraid driving my second rental car, too, but not because I feared someone would crash into me—I feared I’d go blind and drive off a ledge.

Nonetheless, I pressed on in my mad dash around the Oki Islands, making my way next to Nishino (the locals really like to shorten names around these parts), where I picked up my third rental car in two days. The air conditioned interior of the vehicle offered a welcome respite to my hyperactive immune system, but it was a brief one. 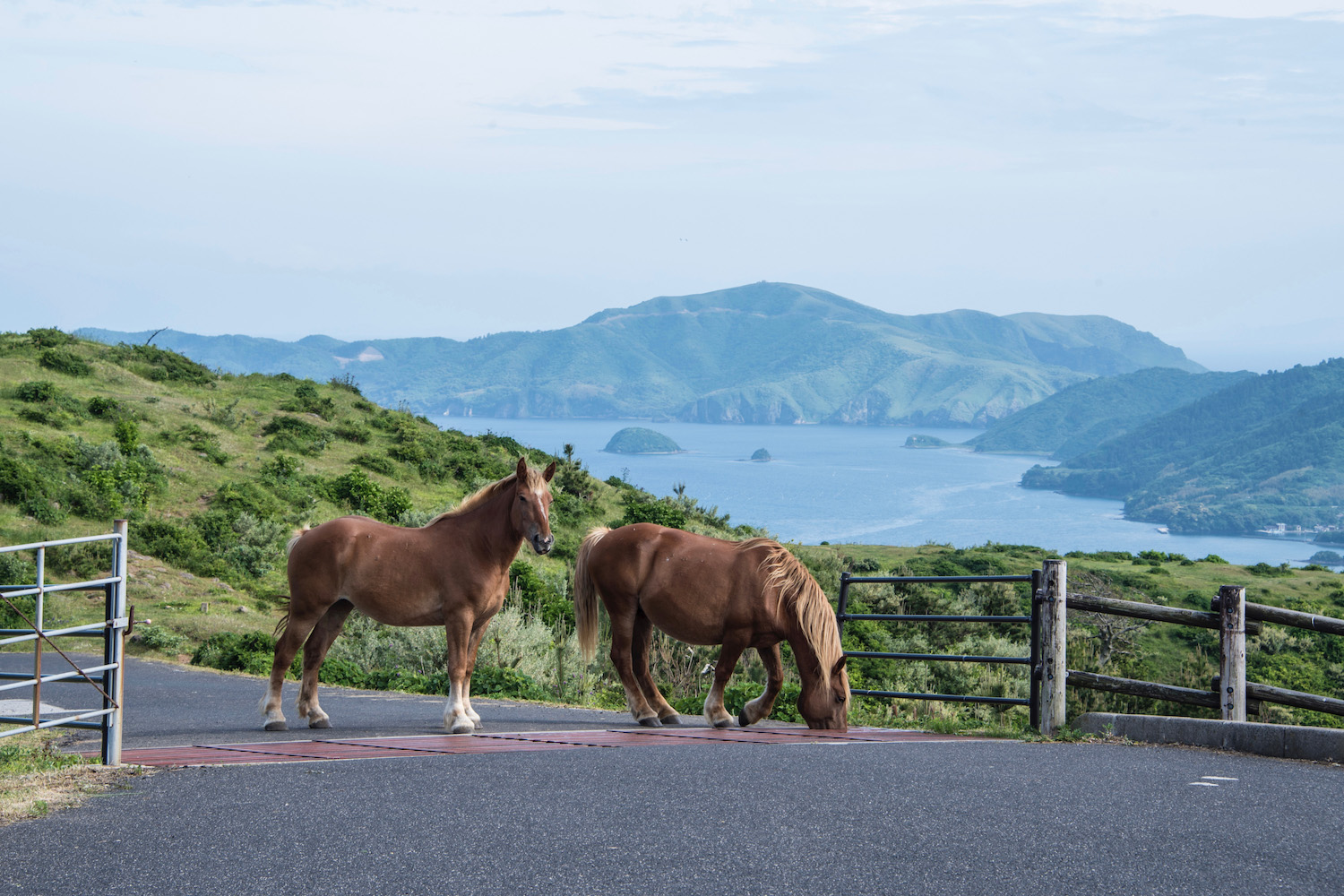 “It’s beautiful,” an older Japanese woman told me in heavily accented English, pointing far beneath the observation point where we were standing. I wanted to believe her, but I also wanted to go back to the car and let the cold air blow directly from the vents into my eyes. I tried to do nothing, but she insisted I continue descending, as if my life (or hers) might depend on it.

In fact, the sight I would find when I got there, Tsutenkyo Arch, was the most beautiful place I’d see on Nishinoshima, which is saying a lot. The Oki Islands, in general, reminded me of Japan’s answer to Ireland and Nishino, with the horses and cows that stood along its cliff tops (and blocked its roads) was exhibit A.

I got back to the rental car office just in time to return the vehicle without a late fee, and assumed the rest of my time in the Oki Islands—I would only be sleeping in Ama Island, a move I’d made be design since it seemed to be the most lacking in sights—would be drama-free. Unfortunately, fate had other ideas.

The Kindness of Strangers

Fate, or my own negligence. At some point between boarding the inter-island ferry at Nishino’s Beppu port and disembarking at Hishiura on Ama, the metal card case that serves as my wallet had disappeared.

Embarrassingly, I had to get the owner of my guest house (who’d come to the port to pick me up) and both members of the local tourist information office involved, calling the Nishinoshima rental car company (I thought I might have accidentally left it in the vehicle) as I waited to board a ferry back to Beppu.

However, as has proven to be the case time and time again throughout my weekend in the Oki Islands, the kindness of strangers saved the day. As the small vessel approached, its skipper stood at the door, my wallet in his hand and a big smile on his face. I felt like a fool—I literally never make mistakes like this one—but my heart was full.

Other FAQ About Visiting the Oki Islands

How do I get to the Oki Islands?

The Oki Islands are accessible via ferry from the cities of Yonago and Matsue on the mainland of Japan’s San’in region. You can also fly nonstop from Osaka-Itami and Izumo to Oki Airport, although this ends up being cost-prohibitive for many travelers.

Are the Oki Islands worth visiting?

The Oki Islands are a unique part of Japan’s San’in region and, alongside the Noto Peninsula and Sado Island, an important part of what makes the Sea of Japan coast so special. On the other hand, I probably wouldn’t go out of my way to travel here if I wasn’t planning to be there already.

When is the best time to visit the Oki Islands?

The Oki Islands are at their best between about April and November, i.e. before the cold (and, sometimes, snow) of winter makes these already difficult-to-access islands almost impossible to explore. However, I wouldn’t recommend coming in May—although the weather is beautiful, the allergens in the air are downright brutal, as I learned the hard way.