When it comes to beaches near Tokyo, there’s good news and there’s bad news. In travel as in life, I always prefer to start with the bad—I’d rather end the evening with a great dessert than start it with a lackluster meal.

The bad news is that while Tokyo is, ostensibly, on the sea, there are no beaches within the city limits. In the parts of the city where the sea is visible, you almost certainly won’t want to swim in it.

The good news? Literally dozens of beaches are within day-trip distance of Tokyo, including one that I consider to be among my favorite beaches in Japan. Care to dive in with me?

Need help planning your trip to Japan? Commission a custom Japan itinerary!
Contents
1  Tokyo is Not a Beach City
2  My Favorite Beaches Near Tokyo
2.1  Shirahama Beach, Shimoda
2.2  Yuigahama Beach, Kamakura
2.3  Katsuura Beach, Chiba
2.4  Enoshima Island
2.5  Zushi Beach, Kanagawa
3  Amazing Beaches Elsewhere in Japan
4  Other FAQ About Tokyo Beaches
4.1  Is there a beach near Tokyo?
4.2  How far is Tokyo from the beach?
4.3  Can you swim in Tokyo?
5  The Bottom Line

Tokyo is Not a Beach City

The reason I’m writing an article beaches near Tokyo and not beaches in Tokyo is simple: While Tokyo is located on the sea, it is not located on the beach. All the seawater within Tokyo’s urban area is industrial and polluted; even if the land bordering it had sandy shores, you wouldn’t want to get in the water. This is not remarkable, of course; few world cities (Rio de Janeiro and Sydney being notable exceptions) can claim to have incredible beaches within their city limits.

At the same time, many of Tokyo’s neighboring prefectures are not only coastal, but much more rural than Tokyo-proper. As you’ll know if you’ve ever landed at Narita Airport, for example, Chiba prefecture has almost endlessly long, sandy beaches. The beach situation in Kanagawa prefecture (just to the west of Haneda Airport) is slightly less rosy, although there are plenty of fine places to swim there. 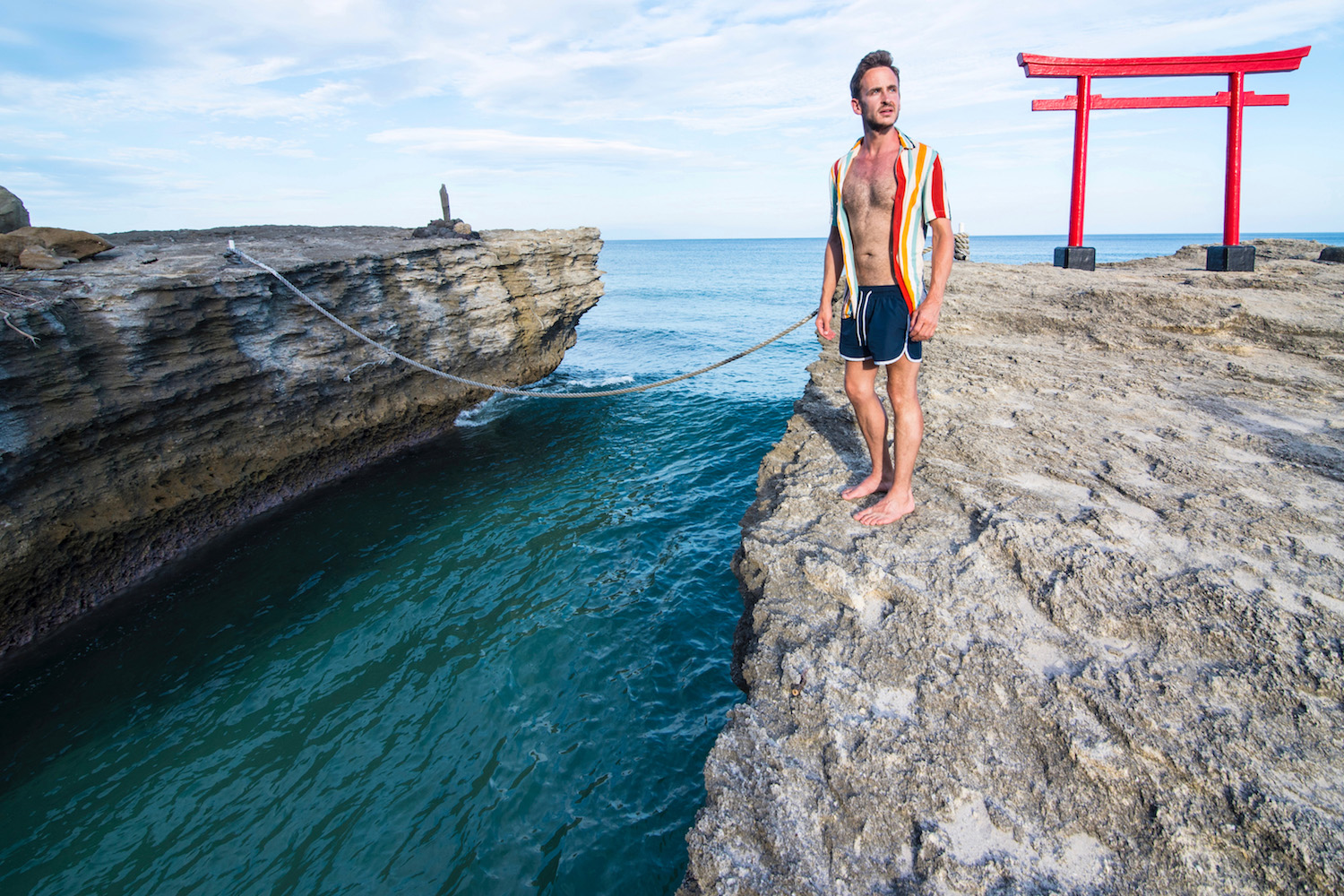 My Favorite Beaches Near Tokyo

Although this would be a long day trip from Tokyo—it’s best to spend at least a night in Shimoda city—Shirahama Beach is undoubtedly the best beach near Tokyo. Moreover, there are plenty of other fantastic spots to swim on the Izu Peninsula, with another personal favorite being Kujuppama Beach.

If your search for beaches near Tokyo is more about convenience than ambiance, you might choose Yuigahama Beach, which is in the popular Tokyo day-trip destination of Kamakura. One day to structure a trip here is to spend the morning seeing the sights of Kamakura city, then heading to the beach in the afternoon (or vice-versa).

Chiba prefecture occupies the vast, largely rural area to the east of central Tokyo, including a substantial Pacific Ocean coastline. The beaches here are more unspoiled than what you find in Kamakura, which makes the slightly more tedious tasks of getting to spots like Katsuura Beach more worthwhile.

Like many of the most convenient beaches near Tokyo, the ones you find on Enoshima Island are at least as noteworthy for their accessibility as they are for the quality of the sand or water. To this end, many people sun themselves on any number of Enoshima beaches after riding the historical tram car from Kamakura onto the island.

Rounding out this list is Zushi Beach, which is located just beyond Kamakura and Enoshima, and objectively is very similar to them. Where Zushi stands out, however, is that it faces west, which means that on a clear day you can enjoy views of Mt. Fuji as you swim or catch rays.

If I’m honest, the Kanto region is not the best place to take a swim in Japan. Thankfully, many of Japan’s best beaches are easily accessible by Shinkansen and plane from Tokyo:

Whether you need help finding beaches near Tokyo, or need an entire trip planned, consider hiring me to create a bespoke Japan itinerary. 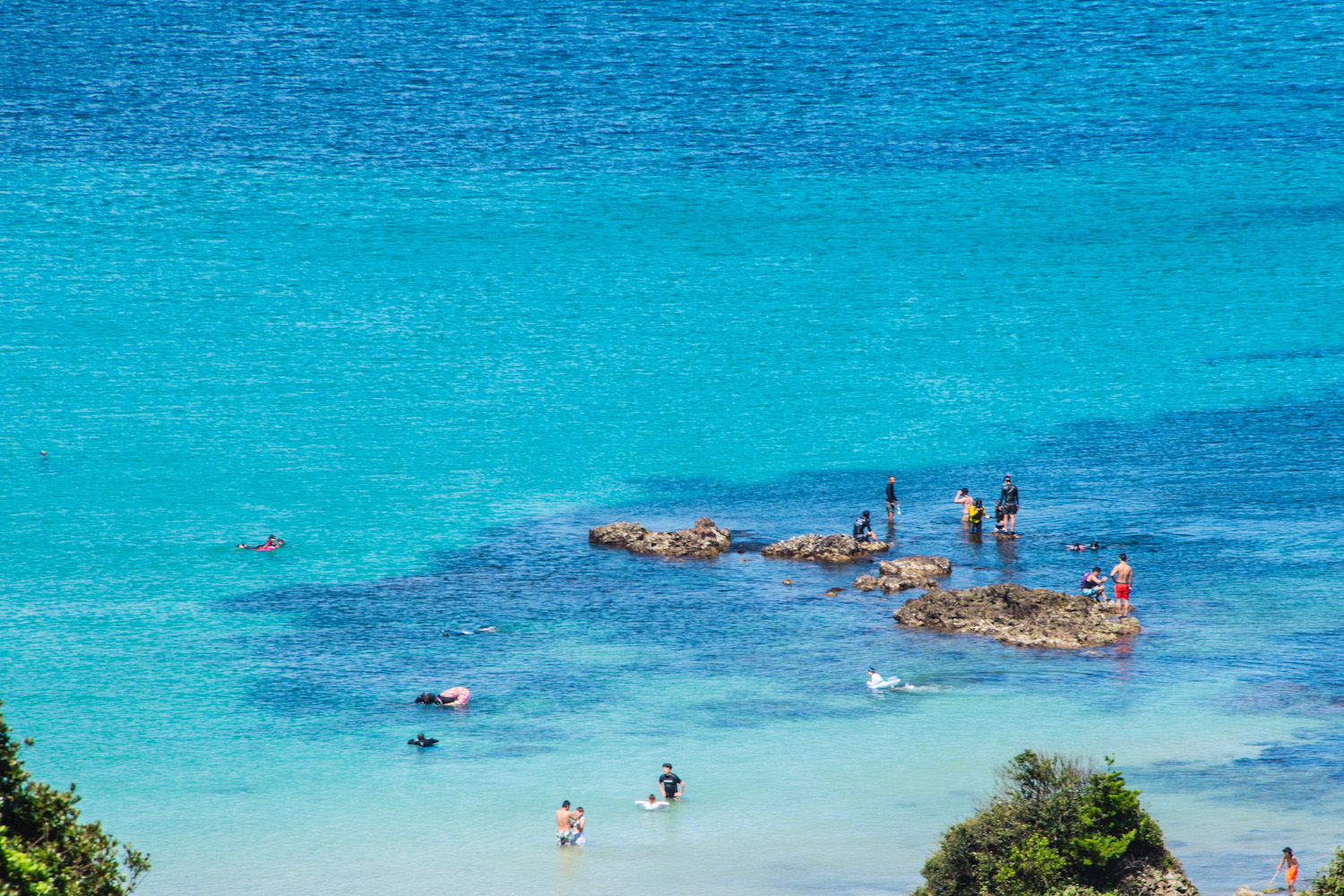 Other FAQ About Tokyo Beaches

Is there a beach near Tokyo?

Several beaches exist near Tokyo, including Katsuura Beach in Chiba prefecture in the east and Yuigahama Beach in Kamakura city to the southwest. The question is whether you consider any of these beaches worth swimming at.

How far is Tokyo from the beach?

The nearest swimmable beaches to Tokyo, in Hayama, Kanagawa, are about 50 km or 30 minutes away. Realistically, you need at least an hour to reach the beach from Tokyo, and possibly longer depending on where in the city you’re staying. How far is Tokyo from the ocean? Well, if you don’t care about swimming or seeing beautiful things, it literally laps at many of the city’s districts.

Can you swim in Tokyo?

You can swim at pools in Tokyo hotels—and, I guess in Tokyo Bay or in the Sumida River, if you really want—but you’ll need to get out of Tokyo’s city center if you want to swim at a beach.

Which of these beaches near Tokyo in your favorite? I have a special place in my heart (and my camera) for Shirahama Beach in Shimoda on the Izu peninsula, but other less incredible beaches make up for their mediocrity with locations closer to the center of Tokyo. If you’re taking a longer trip to Japan (say, two weeks in Japan or more), you might skip the beaches of Kanto all together and instead hit the surf elsewhere in the country, such as in Okinawa or even on underrated islands like Shikoku and Kyushu. Avoid leaving anything to chance when you hire me to plan your Japan beach vacation.