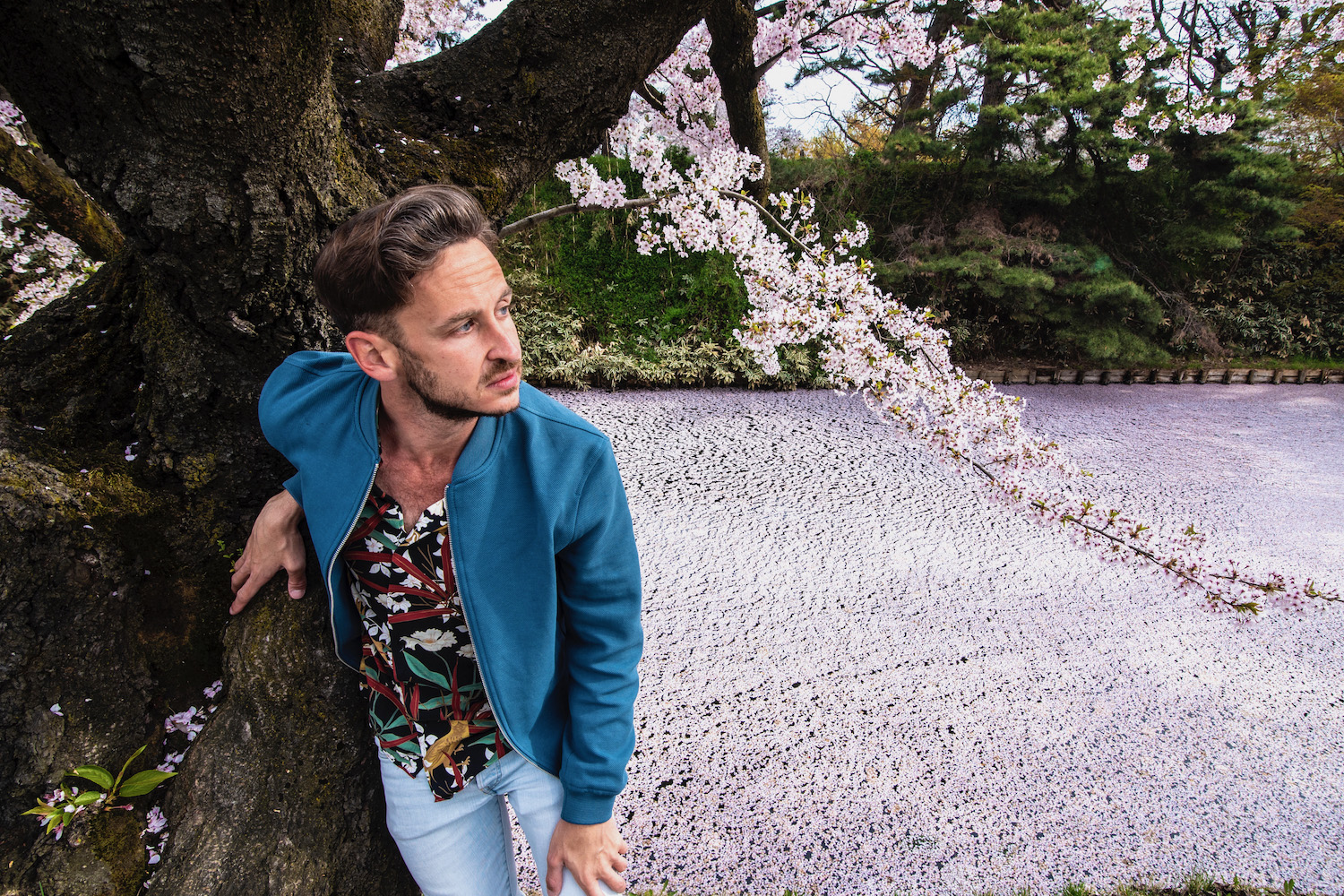 Looking down on Osaka Castle as my J-Air Embraer turned sharp left over the city, I wasn’t sure what to feel.

On one hand, the bright chartreuse of the grounds’ green was a testament to just how long ago sakura season had ended in this part of Japan. On the other hand I was flying to Tohoku, where—assuming my calculations were right, as they mostly have been this year—the cherry blossoms would just have reached their peak.

Specifically, I was counting on the Shidarezakura of Kakunodate, a Samurai town deep in the mountains of Akita prefecture, to be at or just past mankai. I tried to ignore the fact that most trees on the way from Sendai (where I landed) to my overnight base of Morioka were either fully green or on their way there.

It was a trying test of patience—I wouldn’t be heading to Kakunodate until the following morning—but one made easier by the existence of Jajamen, the Iwate-ken speciality I always forget exists when I’m not this far north in Japan.

Today (or Thursday, since I’m publishing this in the future) I visited a shop that was new to me. The old woman who runs it, who humored my desire to speak only in Japanese more out of necessity than niceness, stared at her convenience-store quality photocopy of Vermeer’s “Girl With a Pearl Earring” as the mixed up the strange, gray miso and scooped it onto my noodles just seconds after she pulled them out of their boiling water. 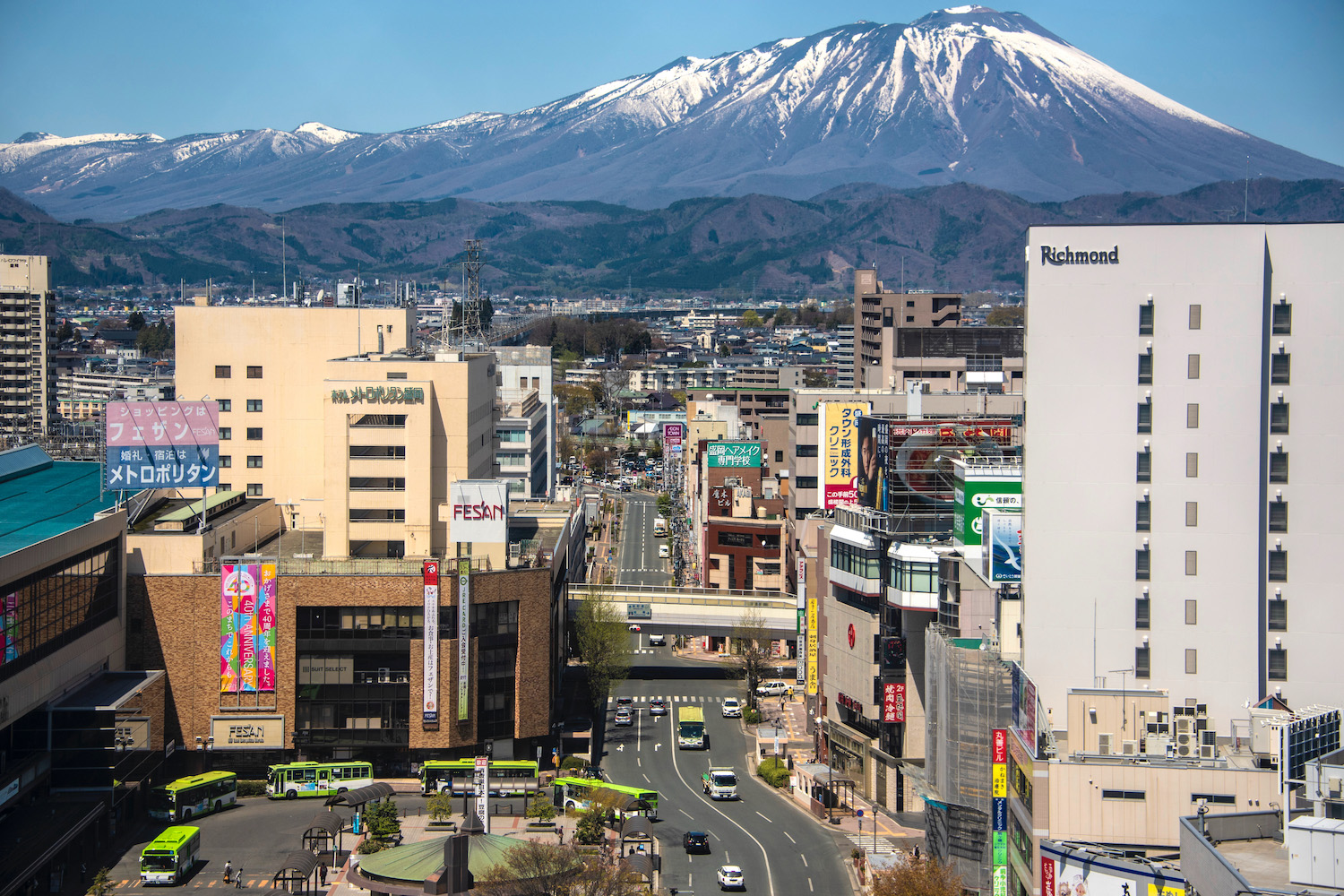 I imagined myself there—in the water, this is—onboard the local train to Kakunodate the next morning. In spite of the powerful heater under my seat, the sheer vacuousness of the rail car (it was before 6 am, after all) conferred upon my bones and body a chill more befitting of early January than late April.

There was warmth, thankfully, in Kakunodate. And I’m not just talking about from the sun, which had risen far enough over the ridge before I began walking amid its historical homes that I was almost hot, at least when I was standing directly in it.

No, I meant the conversation—there was just one, at least only one worth mentioning here. 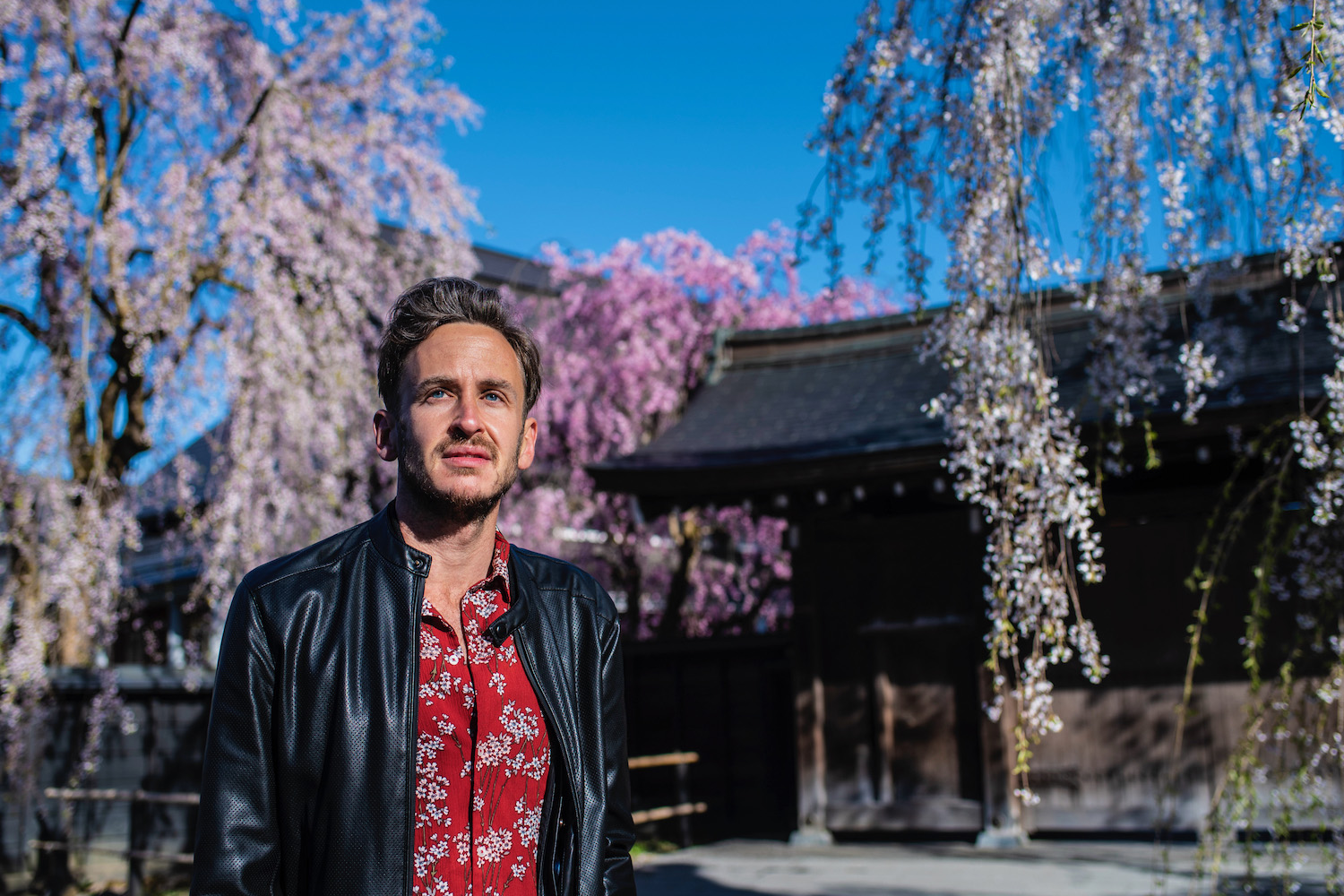 “They couldn’t afford to tear them down,” the German woman (at least I’m assuming she was German) explained to me, not two minutes into the conversation I didn’t expect her to strike up with me, what with how skittish her smile and stride appeared as she walked past me in front of the Iwahashi House.

For my part, I didn’t ask her why she was living in the town, or call into question the assertion she made. Indeed, I affirmed it. “So in a way,” I postulated, “the existence of Kakunodate as we know it was an accident.”

“You could say that,” she laughed, her eyes wrinkling in a way that confirmed to me that she was smiling behind her mask. She then remarked that she found this town more beautiful in winter.

I didn’t agree, but did tell her I had been here at that time of year. Starting (or, at least, continuing) a conversation with the Thai couple I’d encountered during my early 2019 trip, which I took when I was living in Bangkok, had been so much harder, to say nothing of how much more beautiful the town‘s facades looked swirled in boughs of sakura than they had half-buried in snow.

Yet I longed for those days as I looked down on the spring-blushed town from the ruins of its erstwhile castle, the Hinokinai River flanked with pink on both sides, slanking beneath (but so far away from) Mt. Nyuto. 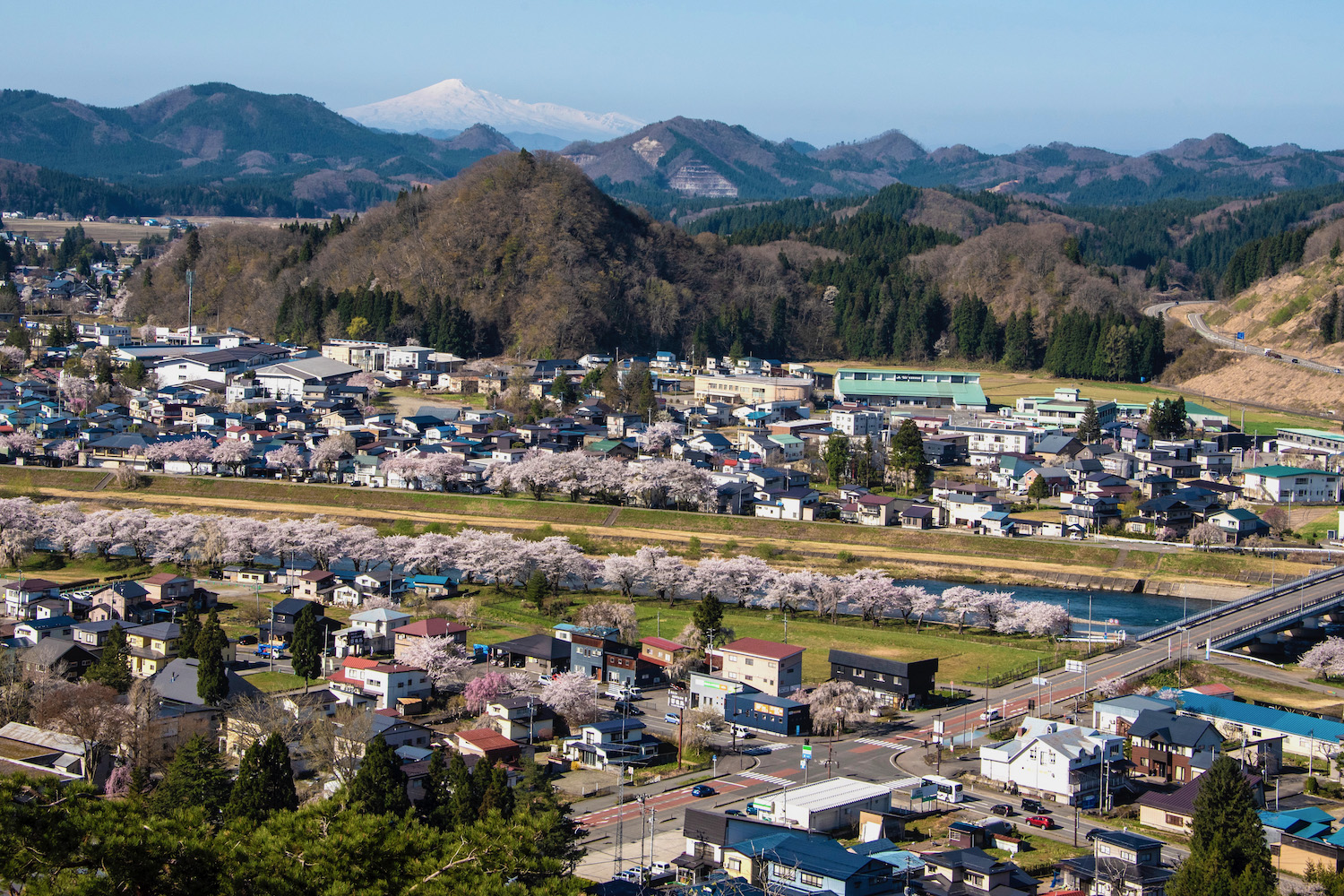 In spite of the lack of foreign tourists (and since it was two Fridays before Golden Week, what I assumed would be a relative lack of Japanese ones), local authorities were preparing for bedlam. Keisatsu were standing garrison every couple of blocks, directing foot traffic and strictly enforcing its flow. I was thankful to be on my way back to the station instead of coming from it, to be finishing up my sightseeing before most others even thought to begin theirs.

I returned to Morioka just in time to virtually attend my Japanese class; I left two minutes after it ended so that I could get the 16:37 Hayabusa to Aomori, where I’d be spending Friday before heading off at the crack of dawn Saturday to Hirosaki Castle, the second of the three remaining big-ticket destinations on my cherry blossom bucket list—the first had been Kakunodate.

So early did I arrive to Aomori-eki to catch my train to Hirosaki that the shutters in front of the ticket gates (and the ticket machines, it seemed) were closed.

The only other person on the scene empathized with my misfortune—in English no less.

“I did the same thing as you,” he admitted, noting that he’d watched walk right past the concealed entrance exactly as I had just done. He also correctly predicted my reason for heading south, as it turns out he was (albeit only to Shin-Aomori, to catch the Shinkansen).

“I hope the cherry blossoms are at their peak,” he said, as the creaky gate began squeaking upwards.

I wound learn, during the next 20 minutes or so that we spoke in one another’s company, that this man had done a great deal of business in my country. He worked in electronics manufacturing, though he didn’t explain in what capacity and for what company, apart from namedropping Panasonic and TDK as his clients.

He spoke about everything from the difficulty of flying in the wake of 9/11 (his employer had forbid him from flying US airlines—he’d once had to drive from Yuma, AZ to San Francisco to catch an ANA flight to Narita) to the precariousness of engaging in commerce on or near the US border, as a Japanese salaryman.

“My company suggested I remove my tie,” he explained in a slightly awkward conclusion to our acquaintanceship, literally seconds before he disembarked the train. “They said it made me appear wealthier, and more of a target.”

It saddened me, for a moment, that I hadn’t gotten his name, even though he also didn’t ask for mine. But only for a moment: As Mt. Iwaki grew larger (which meant that Hirosaki was drawing nearer), it was clear that the sakura no ki around these parts were precisely in the state of bloom I wanted them to be. 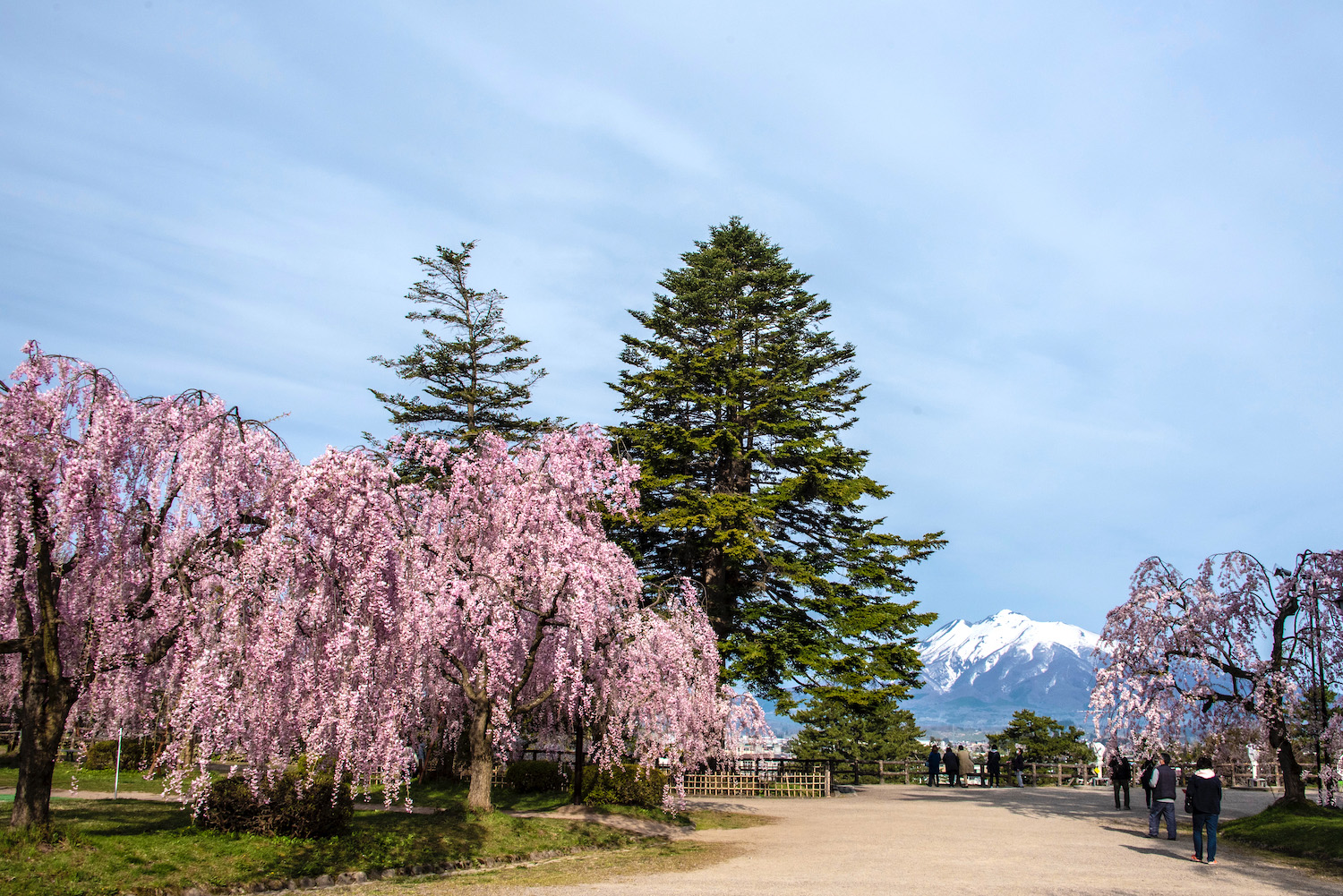 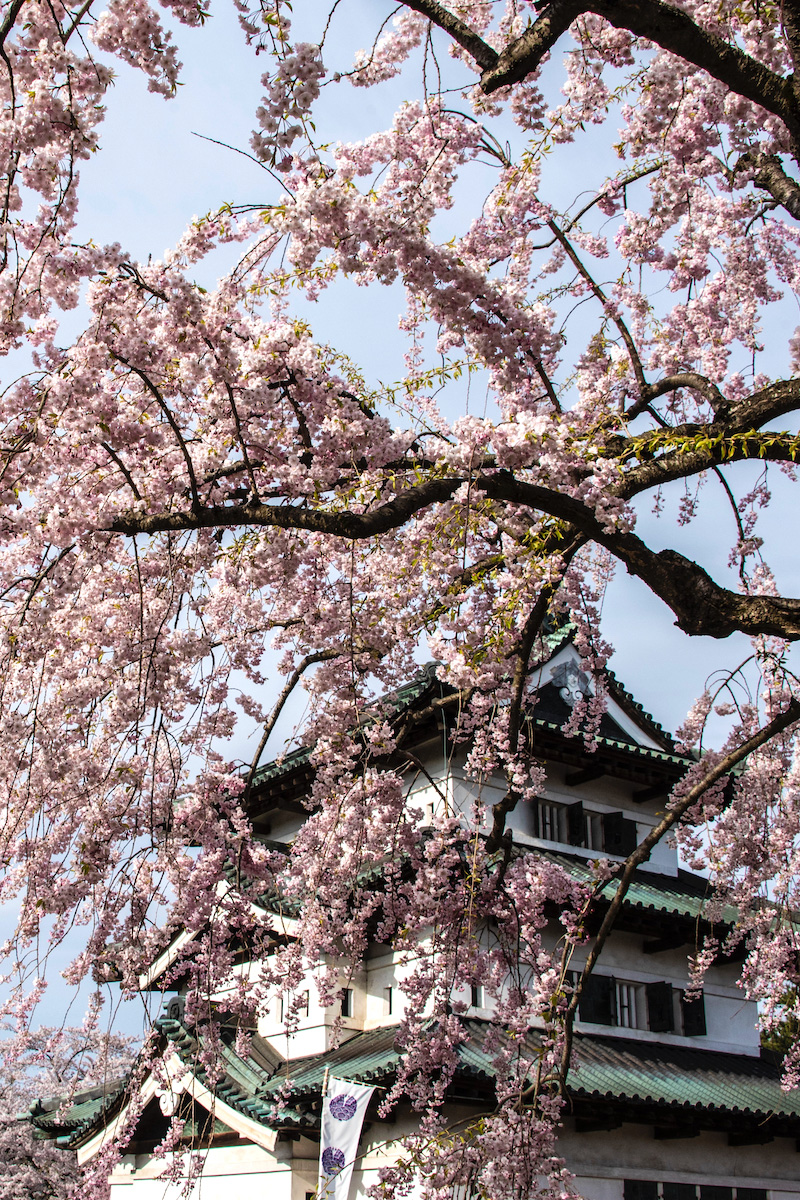 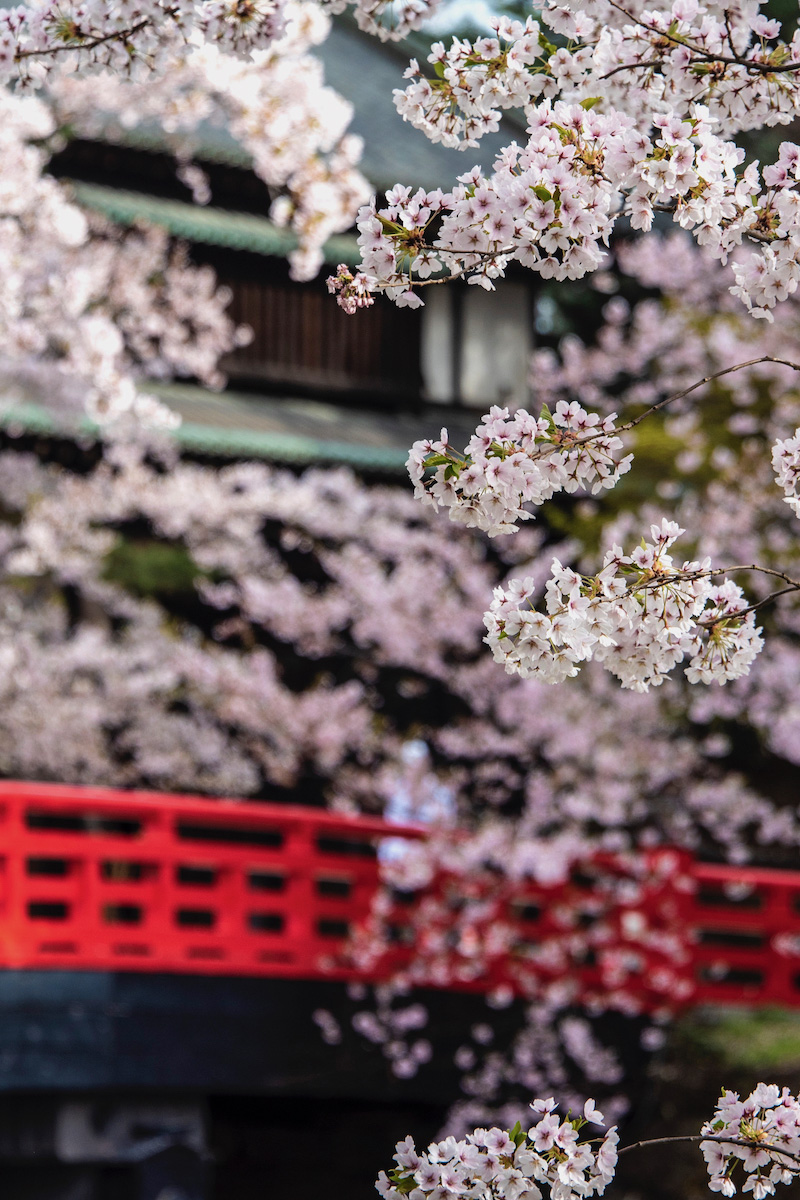 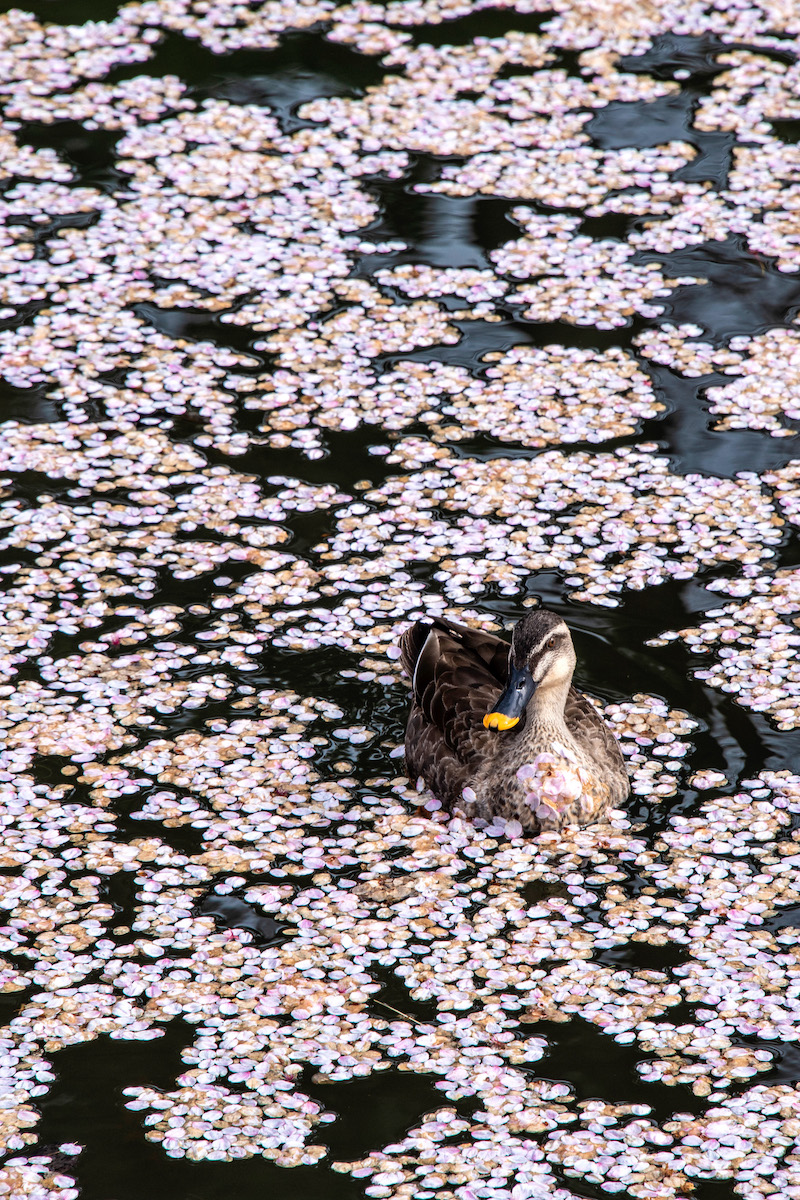 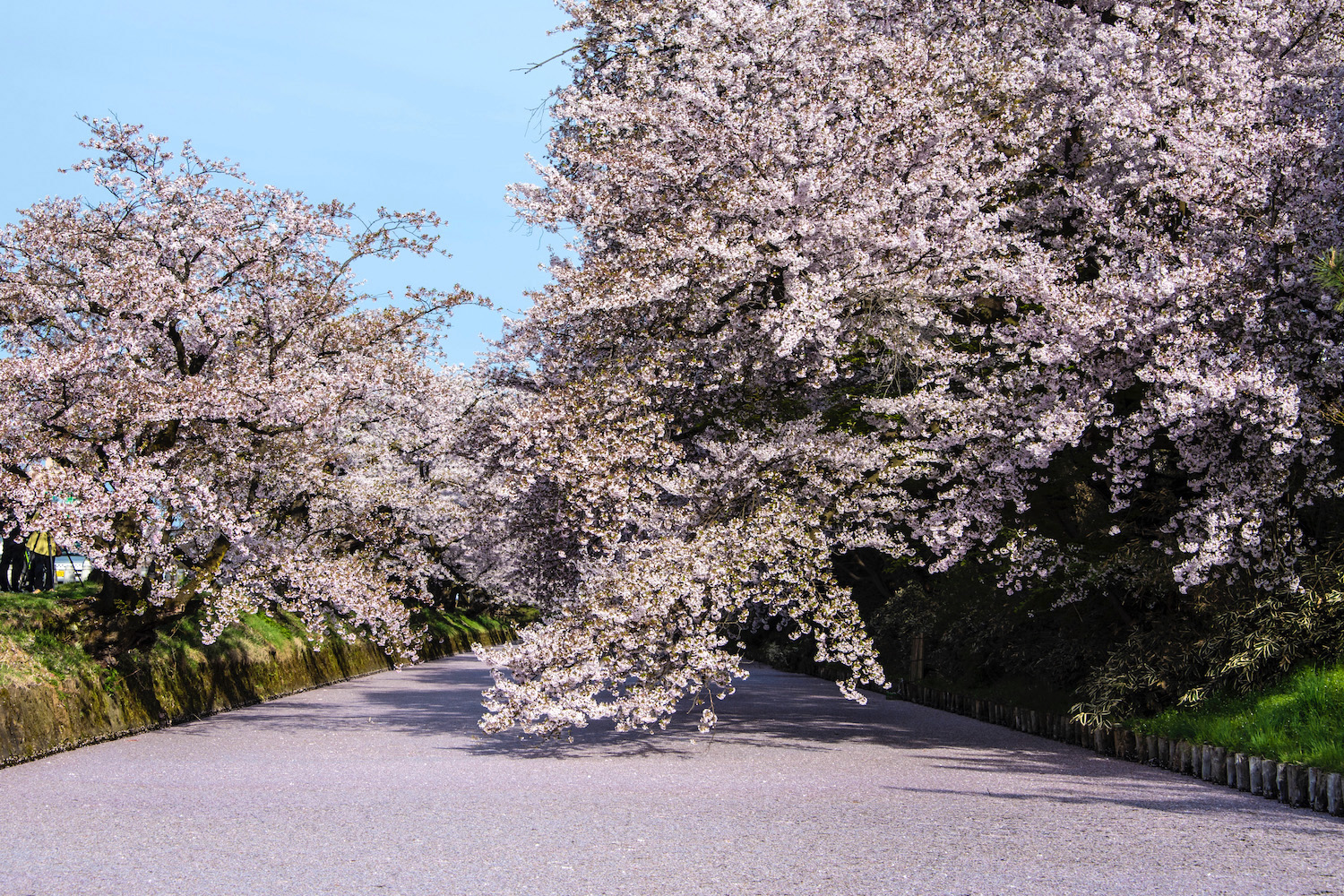 Which is to say that while the weeping ones at the base of the castle were almost perfectly full, the somei yoshino on either side of its famous “petal moat” were shedding, creating a layer of puce atop that water that—at just shy of 7 am, anyway—was so placid it appeared to have solidified.

I didn’t do a Jesus impression, however, or even conduct myself in an especially bold manner as I nervously posed for selfies along the steep embankment leading down to the crusted surface, which a duck came out of nowhere to set in motion again.

As has been the case taking off from Osaka 48 hours earlier, I wasn’t sure what to feel: Sakura season—for me and for Japan—was so close to its conclusion that even the birds knew. Even early ones like me and this fellow, the only two migratory fowl around these parts, no doubt to the chagrin of many restless natives trying to enjoy what I hoped would be the last foreigner-free April until at least the next pandemic.

Other FAQ About Tohoku Cherry Blossoms

Where are the best cherry blossoms in northern Japan?

The best cherry blossoms in northern Japan are in the Tohoku region. Particular highlights include the sakura of Akita prefecture’s Kakunodate, as well as in and around Hirosaki Castle, a celebrated fortress located within day trip distance of Aomori city.

Where can I see cherry blossoms in a Samurai village?

If you want to see cherry blossoms amid authentic, well-preserved Samurai architecture, visit the town of Kakunodate during the last couple weeks of April. To reach Kakunodate, ride a Shinkansen Komachi from Morioka Station in the direction of Akita.

When can I see cherry blossoms at Hirosaki Castle?

The cherry blossoms of Hirosaki Castle tend to reach full bloom during the last week of April. However, the famous “petal moat” that exists around the castle can take a few more days to manifest, so it’s best if you have a few days during which you can make a visit to Hirosaki.