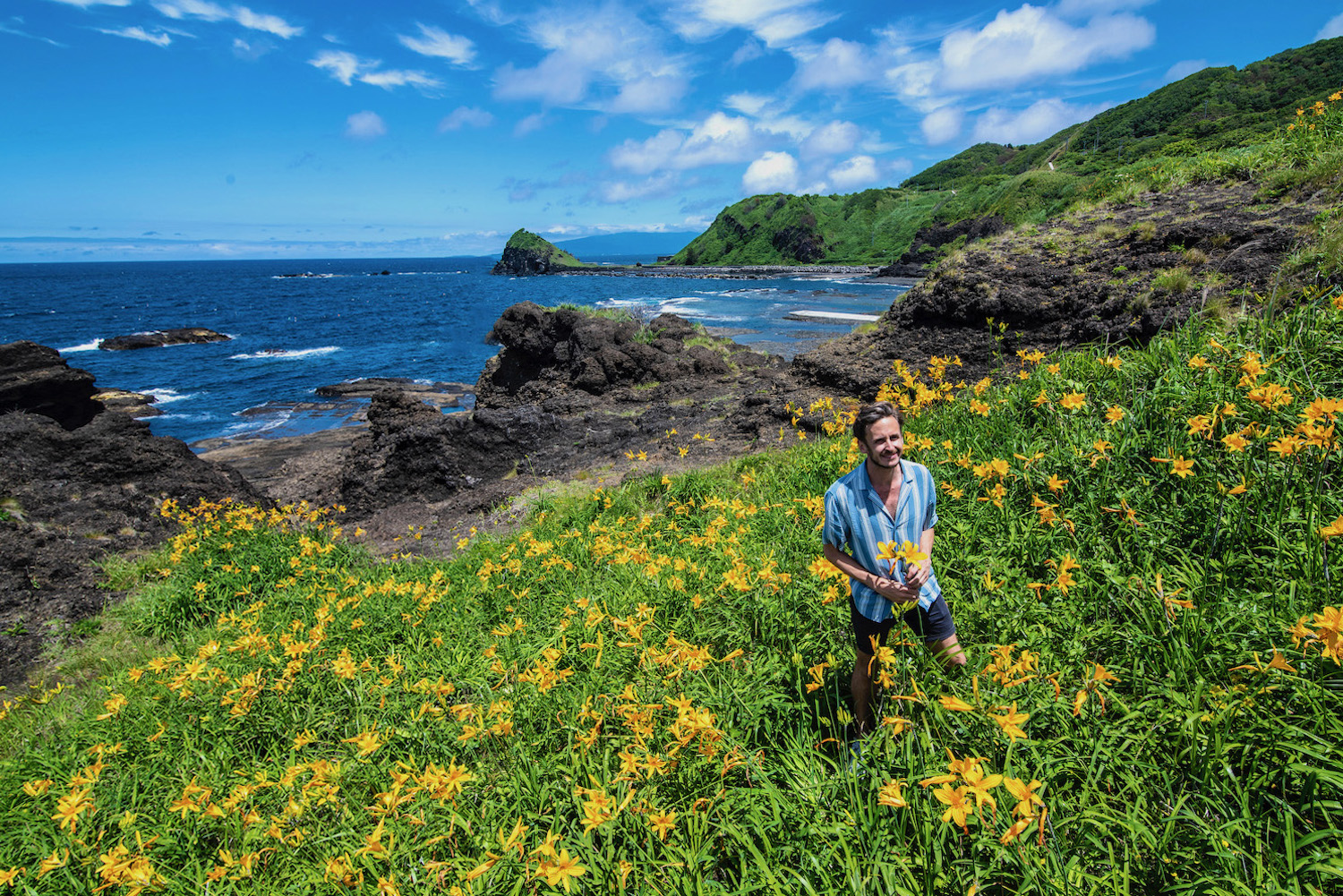 It’s difficult for me to pinpoint when I first decided I wanted to visit Niigata. It certainly wasn’t the icy afternoon seven Februarys ago, when I connected at the city’s airport on a highly irregular award itinerary from Sapporo to Tokyo-Narita.

Nor was it because of the prefecture’s reputation among Japanese people, which is awful. Not Ibaraki or Saga awful, mind you, but then again neither of those are high bars to clear.

Certainly, whatever curiosity I had about visiting Niigata crystallized after I watched the movie Earthquake Bird, a 1980s-era noir thriller that takes place in part on the prefecture’s Sado Island.

That world seemed distant when I landed in Niigata last rainy Saturday morning, and not just because I was more than three decades in the future. 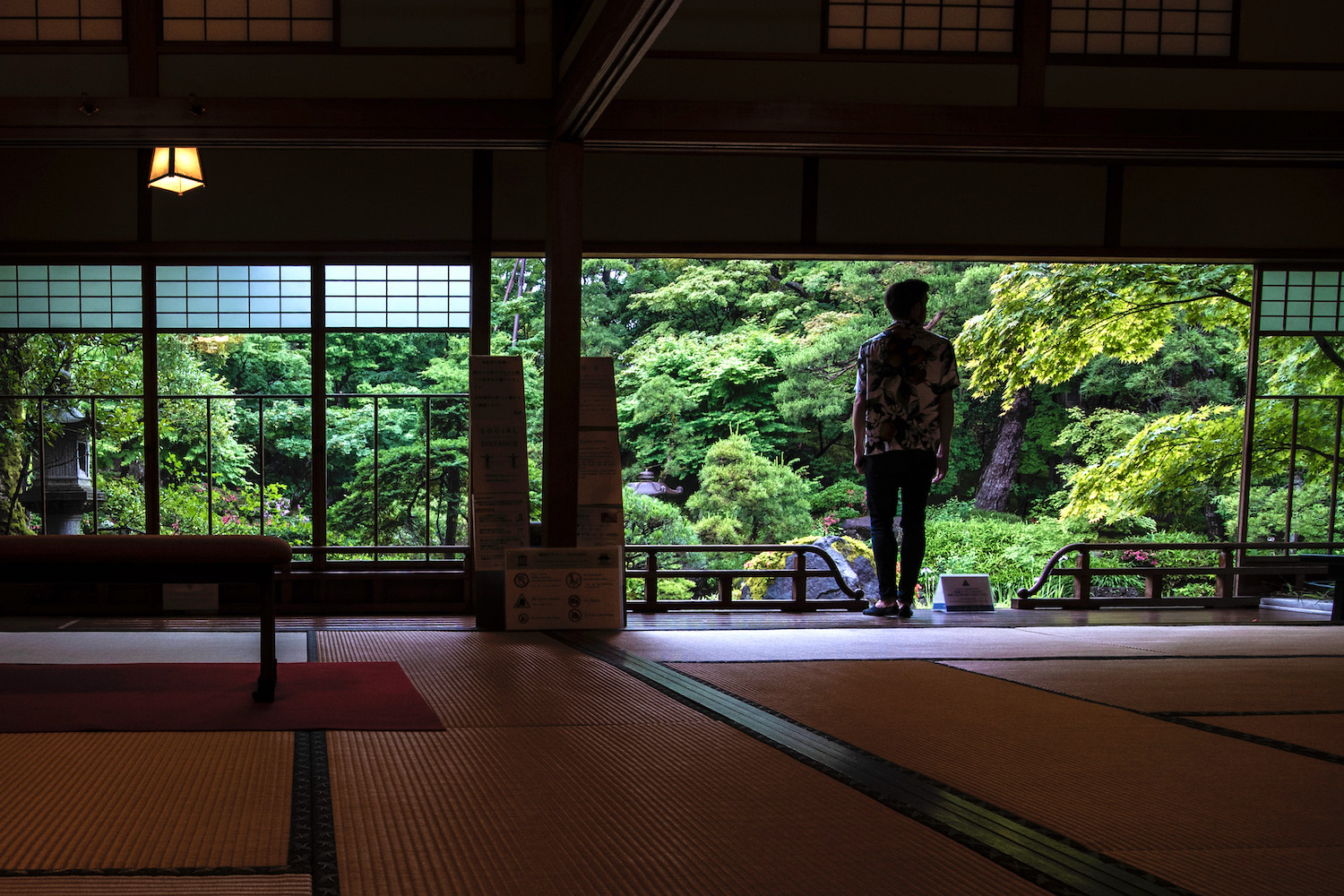 In spite of how intent I’d become on visiting Niigata, the weather forecast in the days leading up to my trip made me consider canceling it. Yet my Saturday sightseeing seemed impervious to the harsh conditions.

It was by design, albeit not mine. “They were planted to protect the then-fledgling city from blowing sand,” explained the guide at Saitou Imperial Villa, itself apparently built within a former sand dune, as rain poured onto the irises and late-blooming azaleas whose pink and purple peppered the verdant garden just beyond the tatami.

This image gels more closely with the translation of the city’s name (Nii Gata literally means “new lagoon”) than its present ambiance, which belies its closeness to the sea. It was also strangely similar to the origin story of the Tottori Sand Dunes, at least the one I remember hearing.

Lunch—a unique presentation of tonkatsu hammered schnitzel-thin—reinforced my feeling of protection, even if I could’ve done without the restaurant’s music choice. I didn’t much care for the source songs anyway; earnest Pinoy takes on already flimsy compositions didn’t help their case.

I tend to prefer more understated covers, ones that stay true to the times signatures of the originals, and the gender of their narrators.

I likewise prefer hands-off tours, like those on offer at Ichishima Sake Brewery in the castle town of Shibata. Here, staff respected me enough to let me explore their facility on my own, after giving me several swigs of complimentary Nihonshu no less.

The space—the freedom—allowed me to make a fascinating connection, even if (on account of the free booze, I guess) I’m not sure precisely why I drew the conclusion. I hope it was at Shibata Castle, which in spite of being architecturally uninspiring was tied, albeit loosely, to the legacy of daimyo Toyotomi Hideyoshi, “the great unifier of Japan.”

I mean, I could’ve been inside the Northern Culture Museum, for all I know, when this light-bulb went off inside my head. Certainly, I spent little of my time there reading placards (which mostly lacked English translations—making sense of the Japanese versions would’ve taken hours), instead distracted by the painted Noh faces hung over the exhibition.

At any rate, the significance I drew from this connection—Toyotomi died in Fushimi, another prolific sake town—was superficial in the grand scheme of things, even if I had spent the previous Tuesday chasing ajisai with my friend (and sake-guide extraordinaire) Kotaro, who originally hails from Kyoto’s least-celebrated district.

Maybe it didn’t mean anything, I thought that evening over an imposing Tenzaru Soba teishoku—the shrimp was so large it might as well have been a lobster. Maybe that also meant nothing, apart from the fact that you get more bang for your buck traveling in parts of Japan like Niigata. 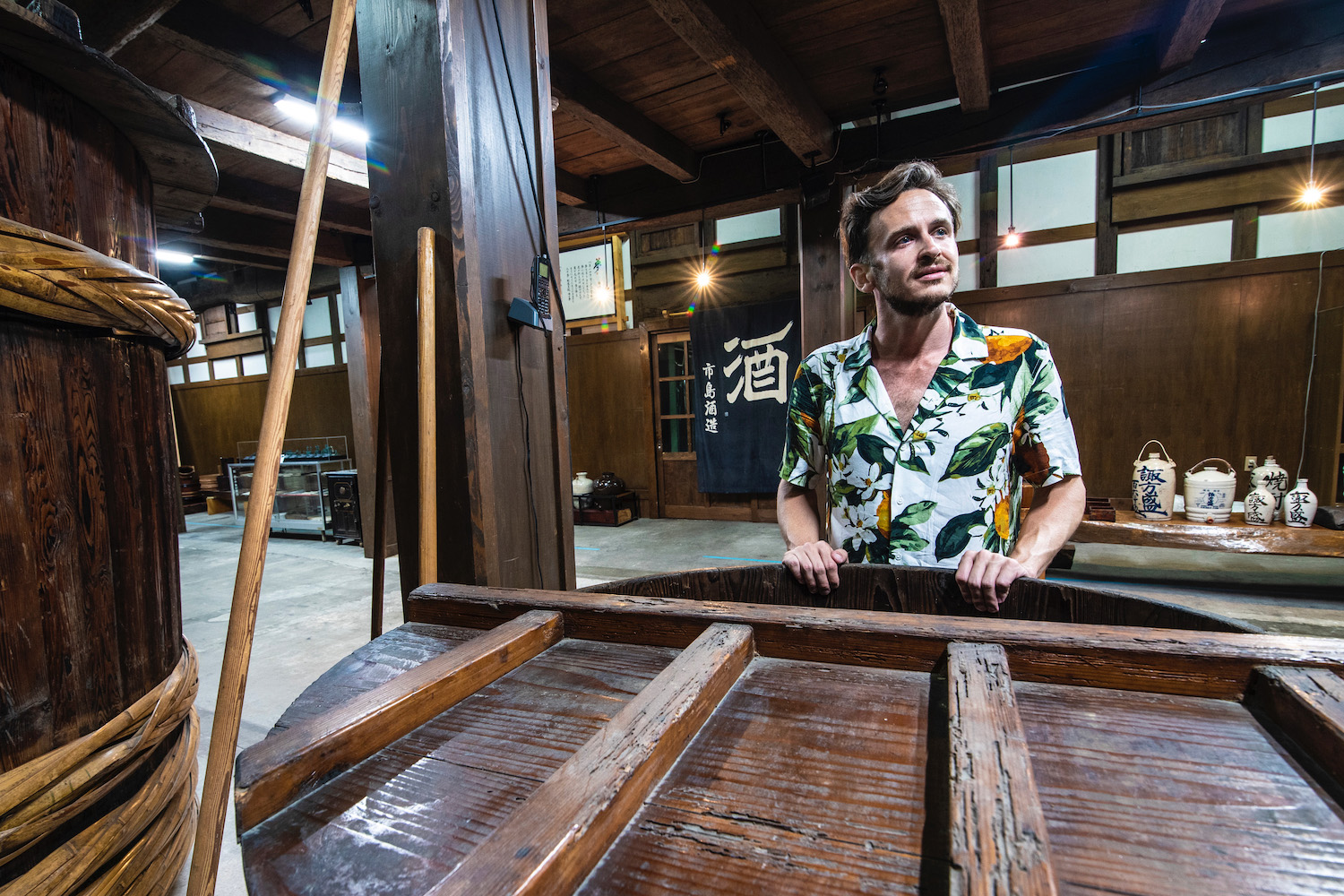 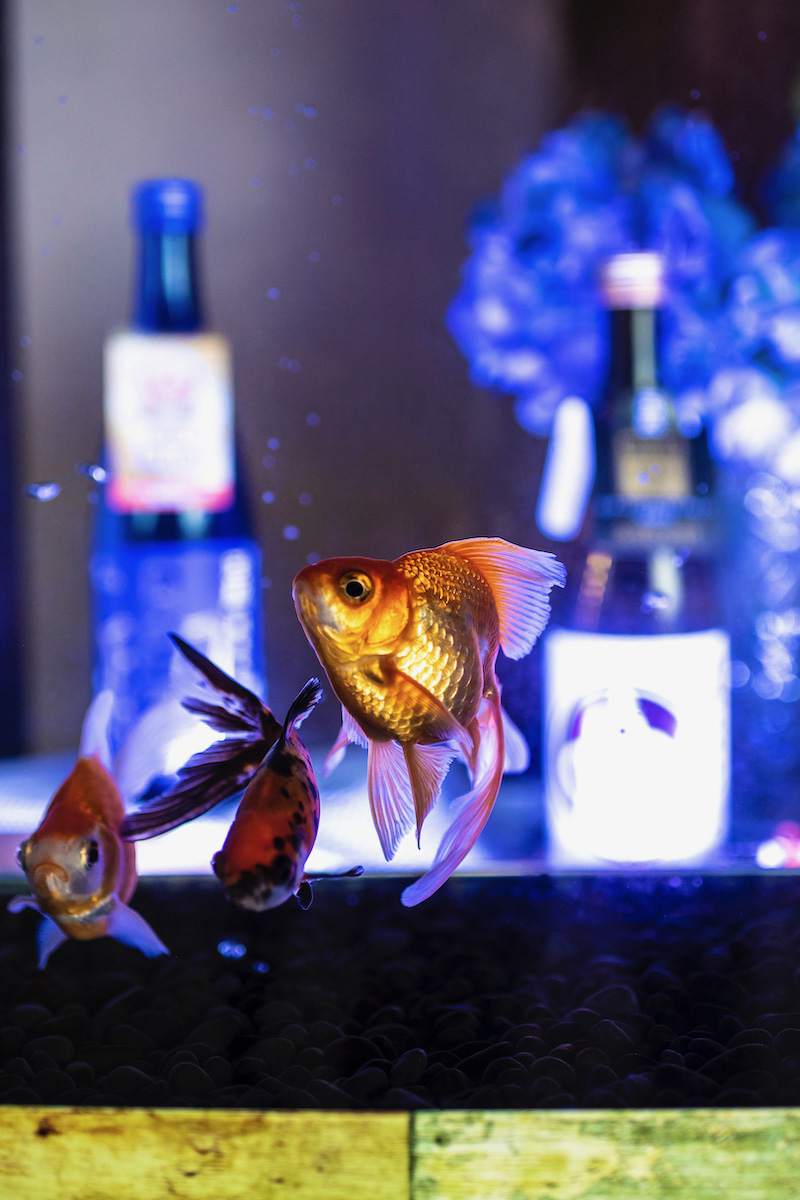 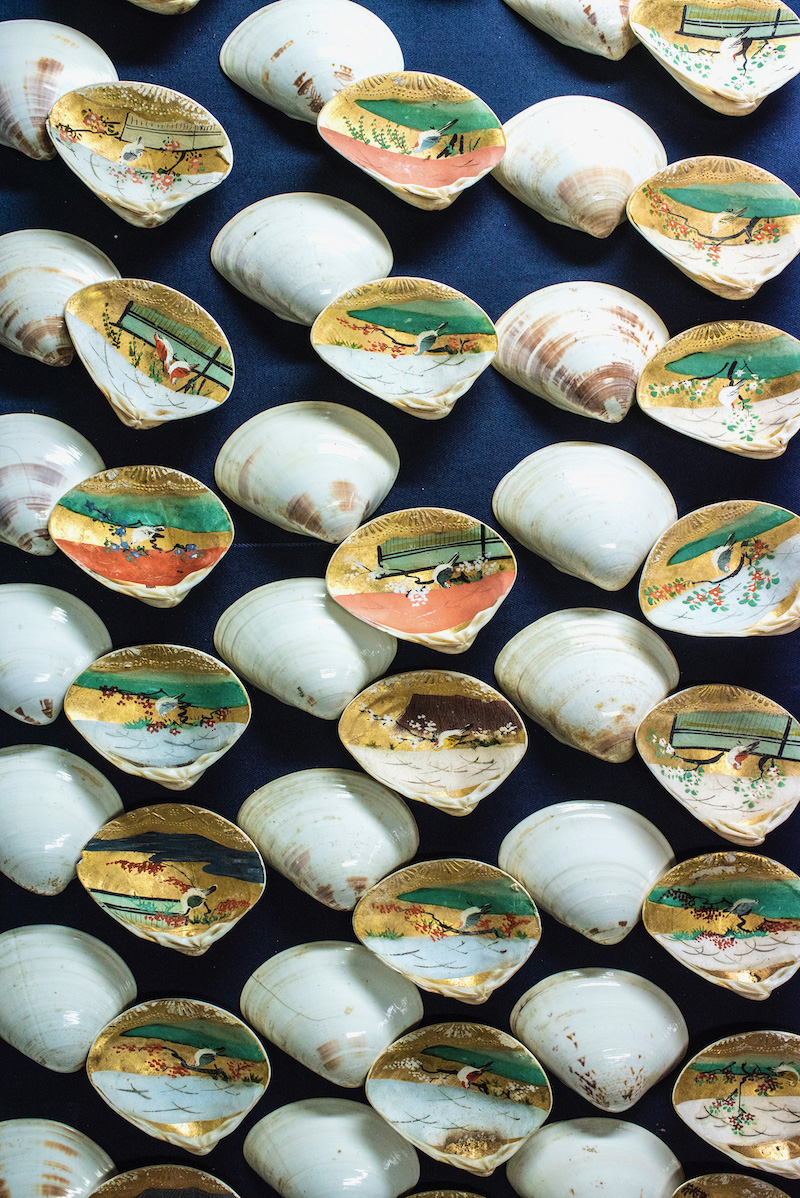 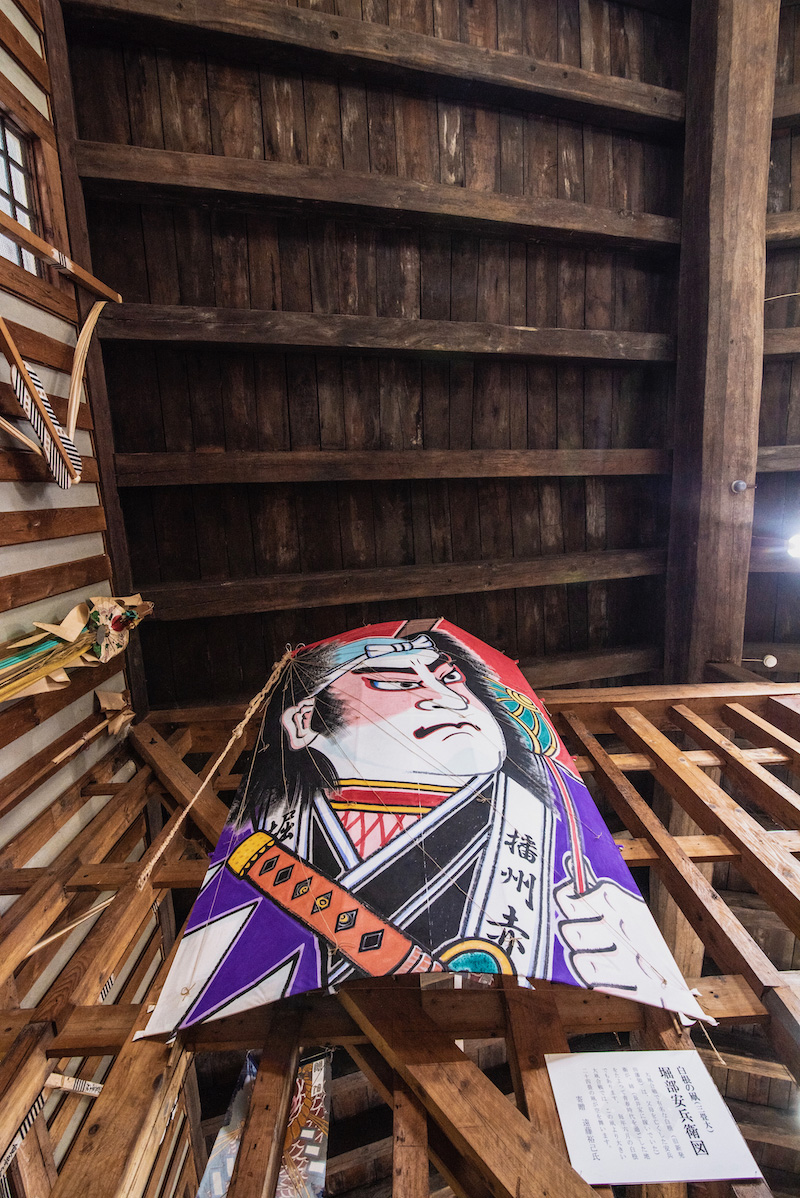 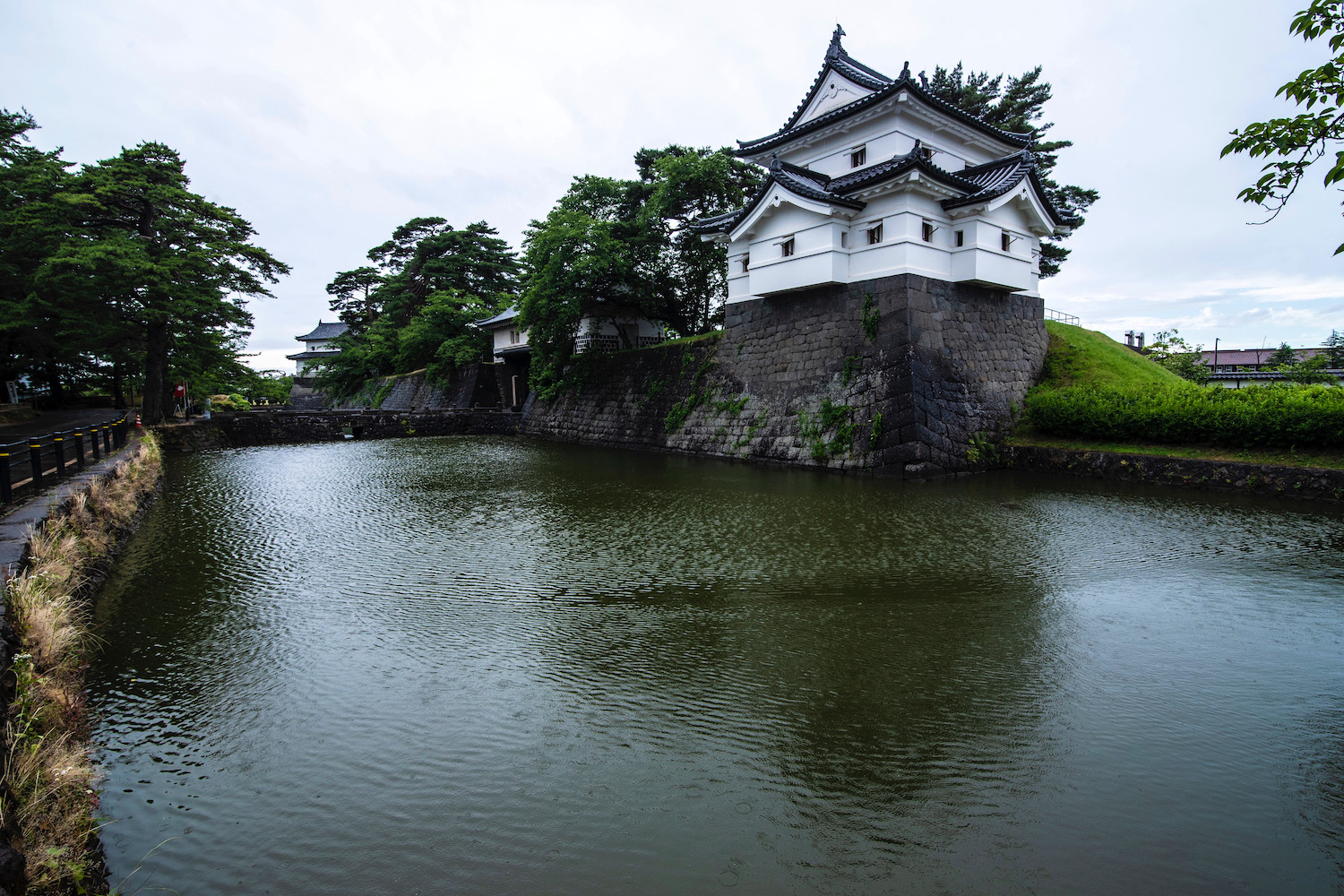 Sunday morning, as I made my way along the Shinano River toward the Sado Island ferry terminal, I felt as delighted by the delightful blue sky as I did surprised by the strange smell: Like a new car, and not just the air-freshener scent.

I felt disappointed, too, ever so slightly. The Sado onsen depicted in Earthquake Bird seemed not to exist; I couldn’t determine which of the island’s many lighthouses corresponded to the one where Lucy fainted, triggering the beginning of the drama’s final act.

And yet I was delighted almost immediately upon arrival on Sadogashima, from the moment I looked down into the inlet just beneath the outlet where I’d made a rental car reservation. The water was the same jade tone as the Miyanoura River on Yakushima island, a coincidence that belies the thousand miles (as the crow flies) of distance between them.

Or crane, given the importance of those birds to Sado, at least based upon how prominently they feature in the island’s tourism marketing.

Although I initially felt disappointed that hangiri “washtub” boats didn’t seem to be operating at Yajima Creek, I tried to put it into perspective. How much fun would a traditional experience be, marred by the decidedly modern (and yet totally medieval) antivirus measures that have infected every element of travel in Japan?

Certainly, I felt more impressed by the Sawasaki Coast, where voluptuous carpets of day lilies perfectly framed a maritime scene that could’ve been in Ireland, had the group of women that asked me to take their picture not done so in a Niigata-ben whose speed and lack of articulation suggested they took me as a competent speaker of Nihongo.

Mochiron, I told them, the rush of being able to communicate entirely in Japanese having entirely counteracted the annoyance I usually feel when I need to interrupt my own photoshoots to photograph someone else. 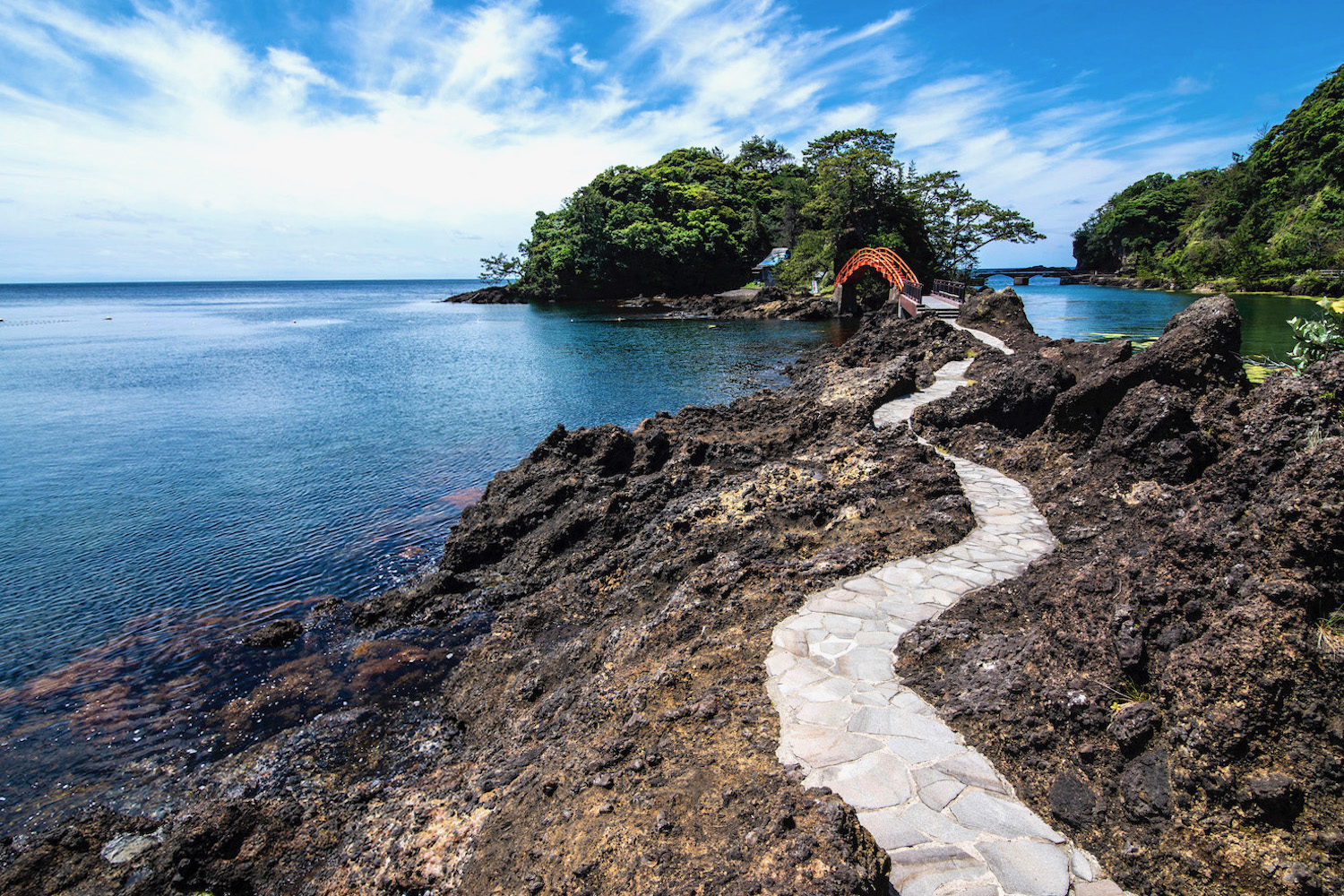 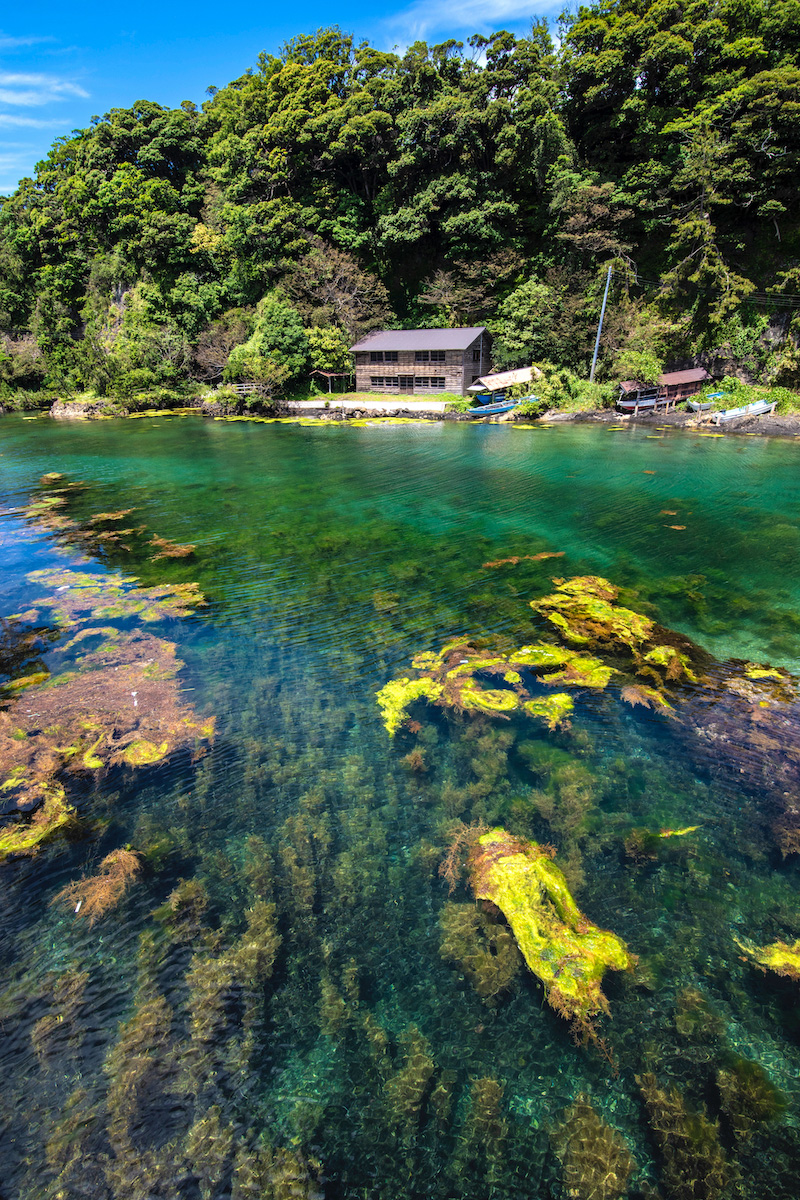 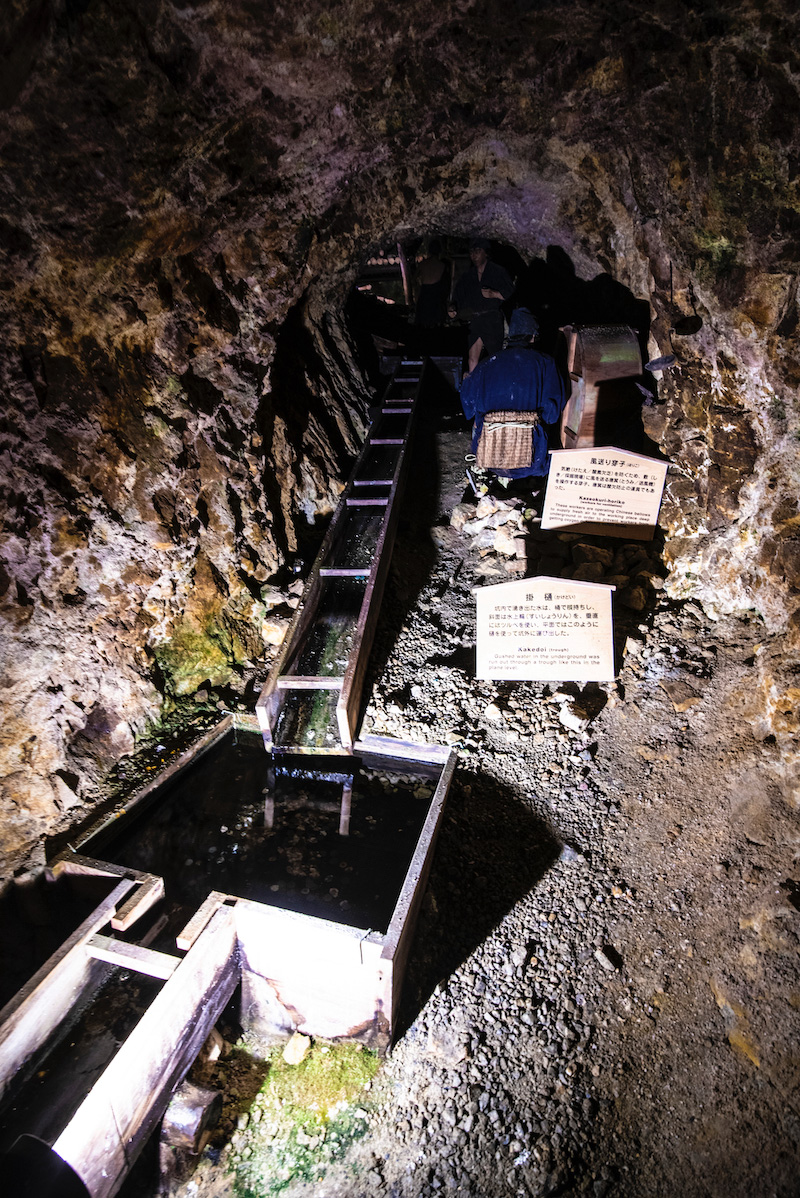 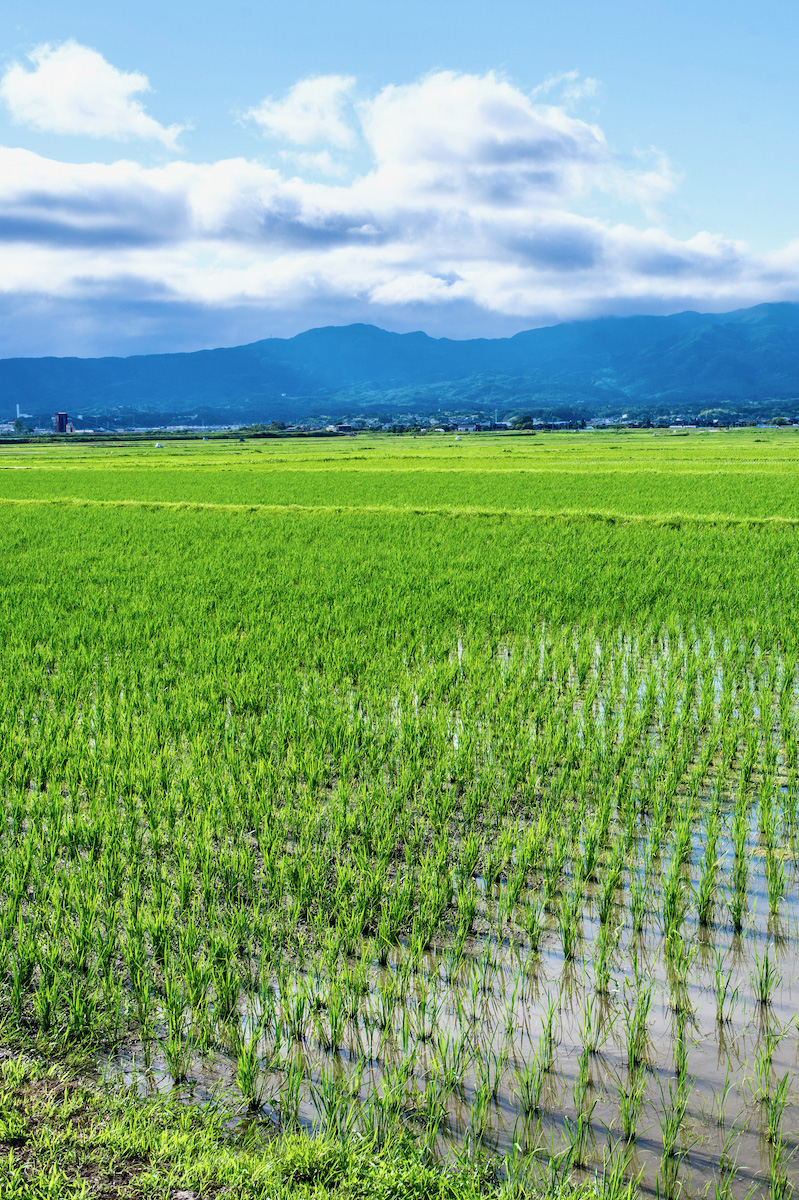 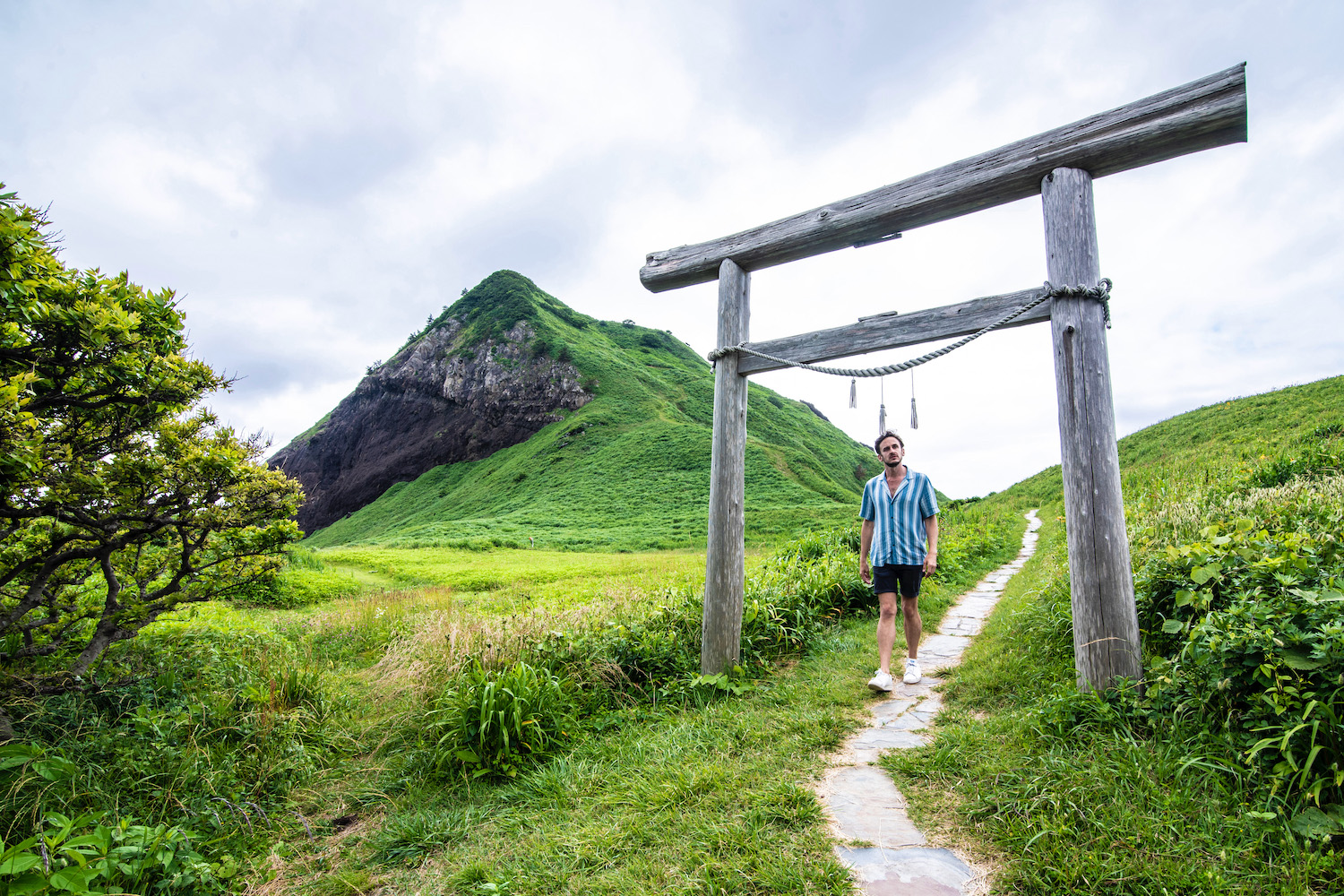 I would be lying if I said the rest of the afternoon on Sado had lived up to the majesty of the morning, even if this was largely due to the poor weather plaguing the island’s northern lobe compared with the conditions that had prevailed down south.

This didn’t even bother me, at least not initially. The Sado Ginzan gold mine had proven as all-weather an attraction as most of Saturday’s sights, for reasons I hope I don’t need to explain.

I likewise felt little disappointment upon arriving to Onogame to realize its day lilies (which are by any measure more famous than the ones along Sawasakihama) were at least two weeks past peak. That I didn’t happen upon any of the Noh stages that are supposed to be numerous around these parts was slightly more of a bummer.

The performers, no doubt (Noh doubt?) would’ve been wearing surgical masks underneath their decorative ones, belying the bravery of the men who painted this art form into life.

I mean, it’s bad enough that Japan has gone from kamikaze (the 20th century’s most fearsome fighting force) to being afraid of fresh air in 75 short years. Can you imagine what Toyotomi Hideoshi and his ilk would think of grown adults who wear cloth diapers on their faces inside their own private vehicles?

Other FAQ About Visiting Niigata, Japan

Is Niigata city worth visiting?

Niigata is definitely worth visiting for discerning travelers who don’t mind digging deep. Within the city center, attractions like the Saitou Imperial Villa are unique and beautiful, while sake breweries and medieval fortresses in the nearby city of Shibata are worth the time a train ride takes. The treasure of Niigata prefecture, meanwhile, is Sado Island, which is about 90 minutes away by jetfoil ferry.

What is there to do in Niigata station?

As of mid-2022, Niigata Station is mostly under construction—there isn’t a whole lot to inside. However, there are plenty of restaurants just to the west of Niigata Station, which is also the same direction you’ll need to go to reach the city’s main attractions.

How much is Shinkansen from Tokyo to Niigata?

The Joetsu Shinkansen from Tokyo to Niigata costs around ¥10,000 one-way, depending on your class of service and assuming that you pay cash. However, this route is fully covered by the Japan Rail Pass, if you plan to have one before you start your Niigata sightseeing.