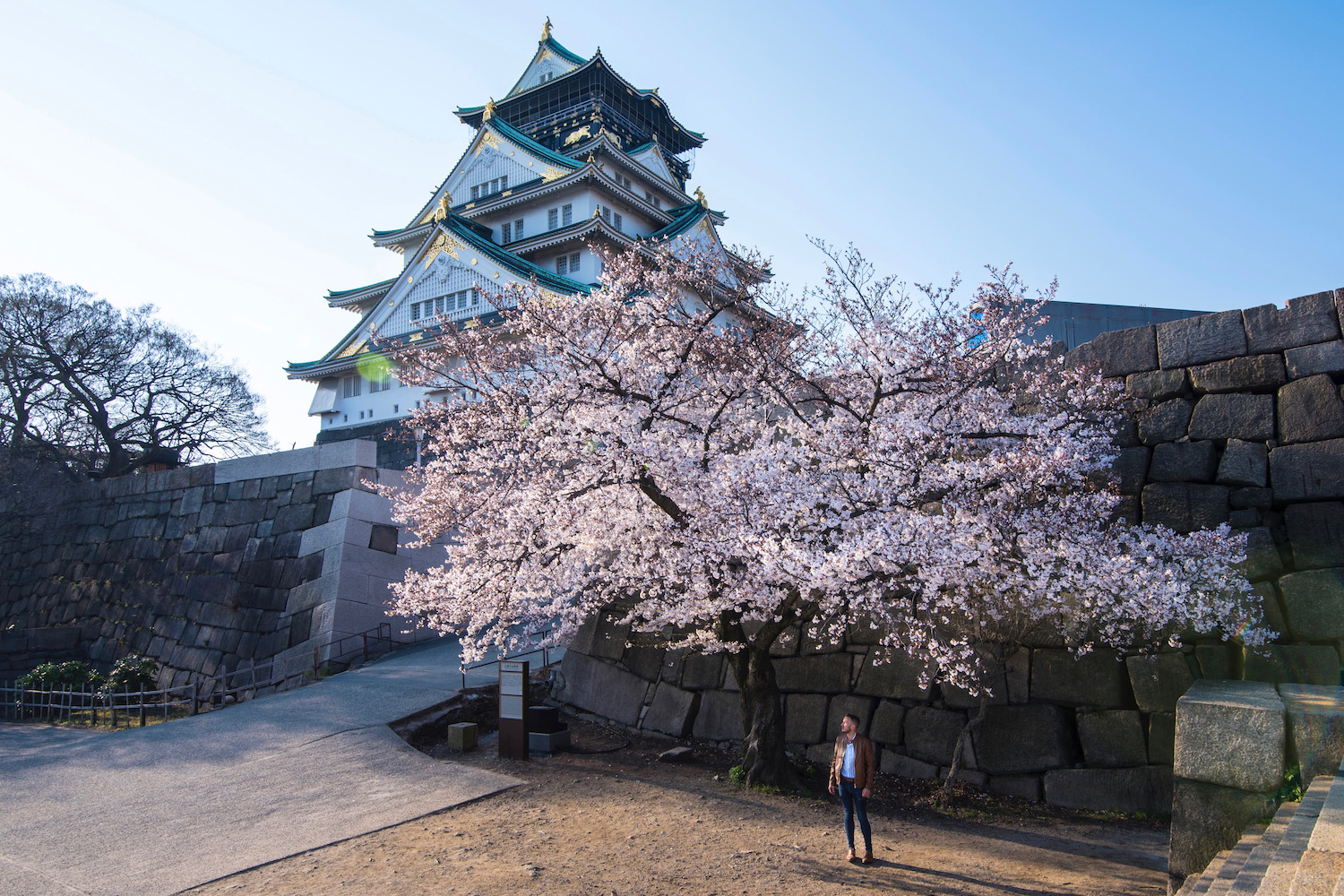 My Osaka cherry blossom trip technically began yesterday, just after I finished up at Himeji Castle. I arrived so early in the city, in fact, that the monk receptionist of my strange temple hotel tried to make me wait 30 minutes to check in.

I twisted his arm, but Osaka itself was not so accommodating. Although some sun peaked through scattered patches of blue sky as I explored underrated Shitaderamatchi in the afternoon, the clouds were practically black by the time I reached Osaka Castle, to say nothing of how miserably cold it was.

Rather than wasting my time snapping mediocre photos, I dropped my bag at the strange temple hotel, and made the short walk to Shinsekai for a conveyor-belt sushi dinner. At dawn, I said out loud after one too many cups of sake and not enough tuna maki rolls. I begin again at dawn.

Begin again at dawn I did, or just after it if we’re being technical. The sun had actually started to rise during my run at 5, but I honestly couldn’t tell if the sky being revealed would be clear or blue—it was, thankfully. 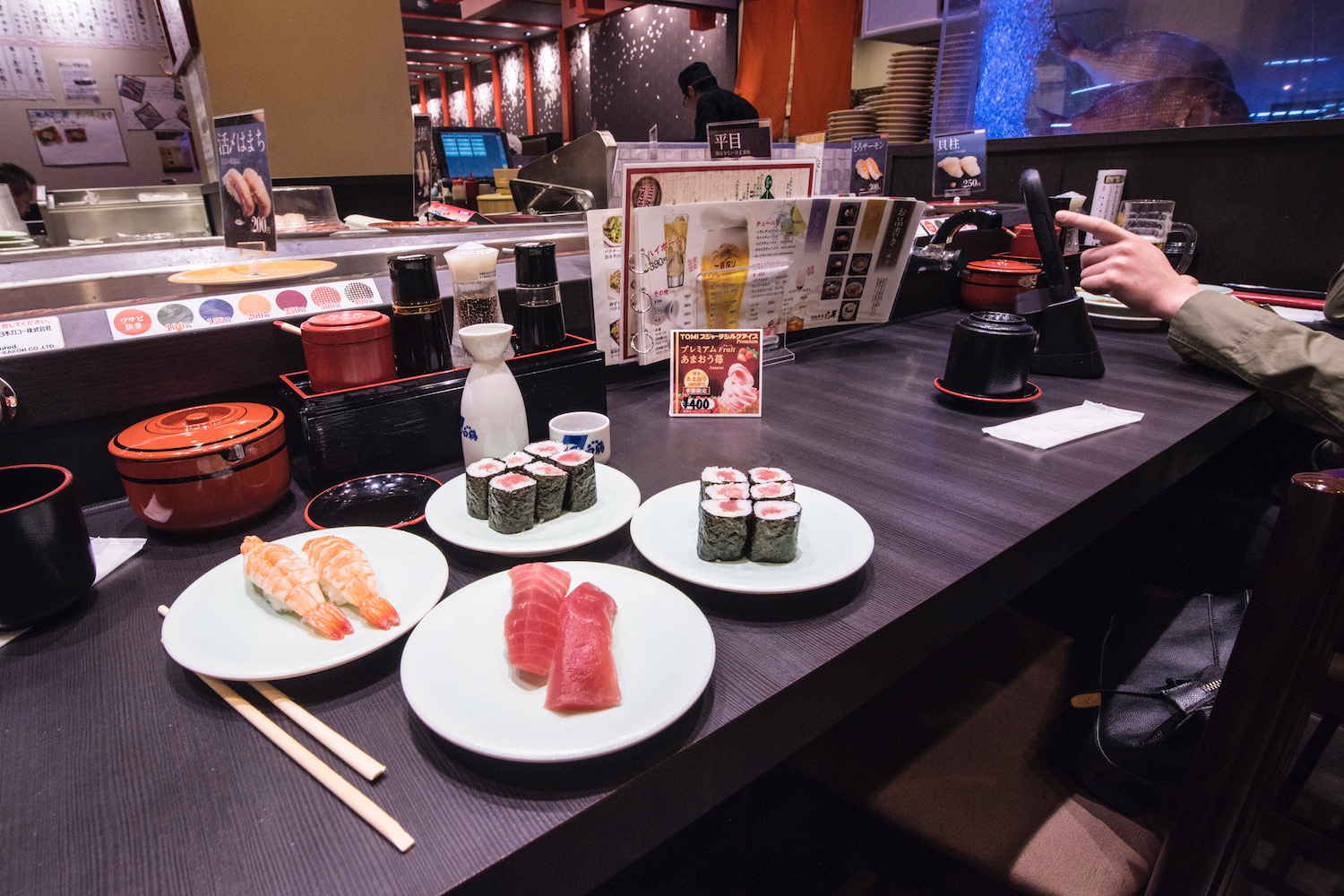 Which is not say my morning was perfect. In addition to the fact that I chose to enter the grounds of Osaka on the wrong side of the massive complex—when we’re talking about the way the light shines this is—the trees weren’t as close to full bloom as I’d ascertained the previous evening.

No, it would be another day (probably two, given how cold it still was) for the Osaka sakura to get where they needed to be for the “tunnel” effect I imagine landscapes on the south flank of the fortress were going for. I’d be lying if I said I wasn’t disappointed, but I decided to breach the inner walls and walk right under the keep—it was possible I’d missed a tree the night before in my hurried state. 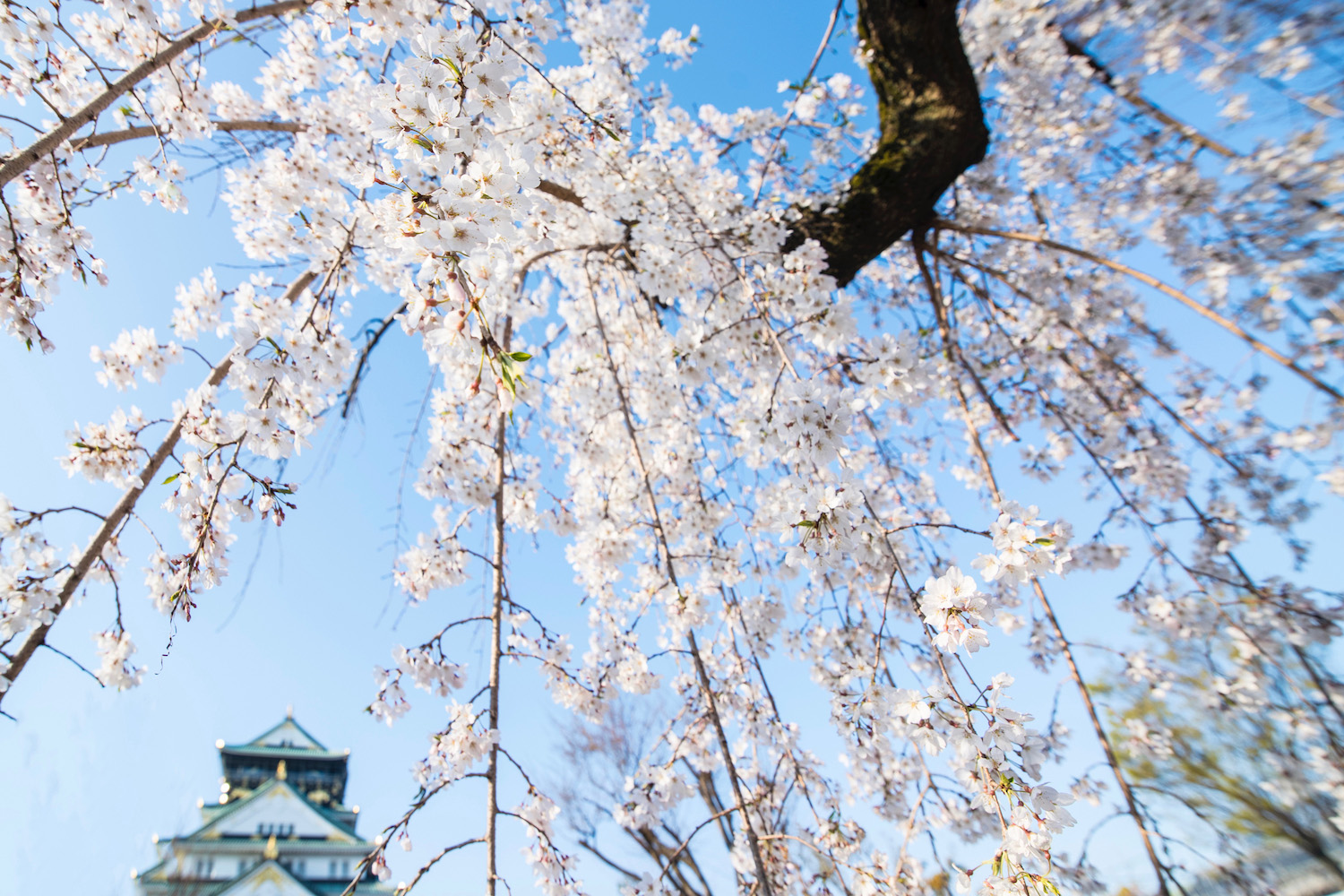 I had, it turns out. A voluptuous specimen at full bloom sat right north of the main tower, just before Gokurakubashi bridge. It was so beautiful I literally lost track of time.

Not knowing precisely where my morning hanami would take me, you see, I’d told the monk receptionist that I would eat breakfast at 8. Although he hadn’t indicated that this was a hard-and-fast time, this was Japan, after all. 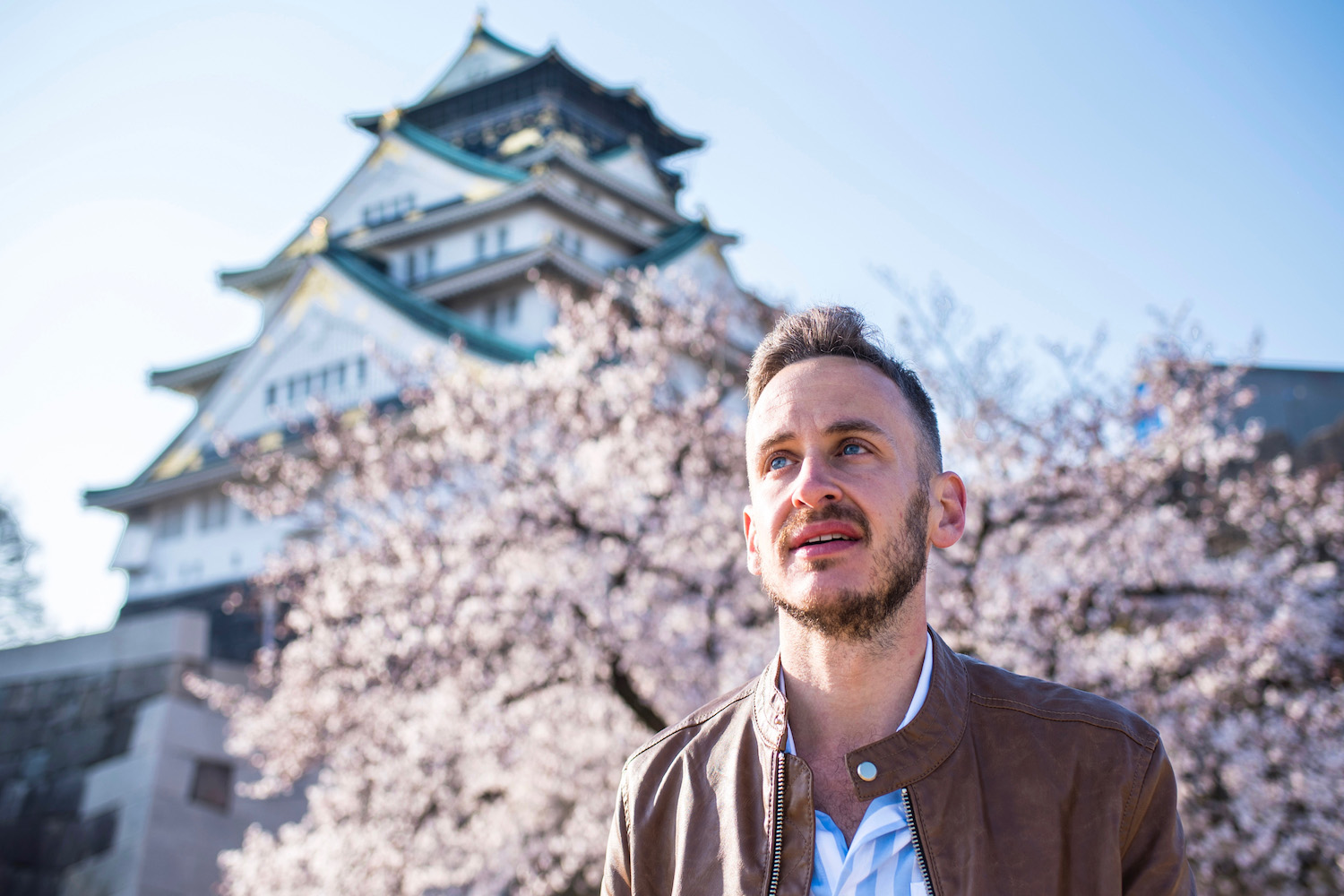 By the time I realized how distracted my Osaka cherry blossom photo shoot had made me, it was already 7:52. The subway station alone was at least eight minutes away, to say nothing of the walk I’d have to make on the other end. If I was lucky I’d be there before 8:30; even then, the staff likely would’ve closed the breakfast room entirely by that point.

The receptionist (who was different than the one whose arm I’d twisted to check in early the night before) appeared baffled when I entered, though I wasn’t sure if that derived from the speed with which I entered the strange temple hotel, or the fact that I hadn’t lost a bit of breath in spite of it. 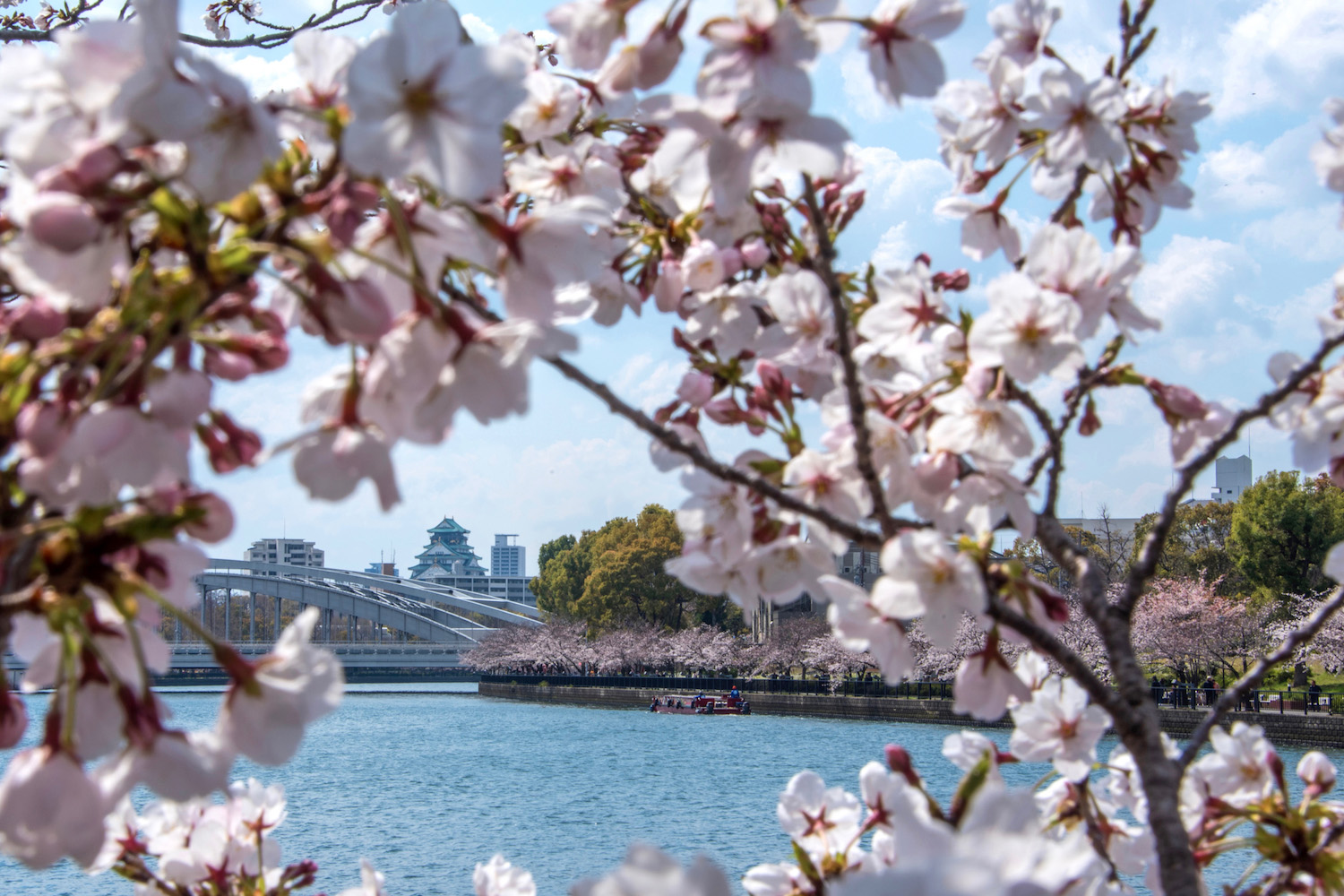 After a moment, he realized what was up. “Bu-rek-ha-su-tu?” he asked, in what my friend (and Japanese teacher) Eriko endearing refers to as the “Katakana” way of speaking English. A young woman (whom I’d also never seen before) showed me to my seat—I was shocked not only to see someone else eating, but that two other diners were apparently still forthcoming.

The Magic of Hanami

I followed up the colorful (but bland, if I’m honest) rice porridge by hurriedly packing my bag, and dropping it at the front desk. My adventure seeing cherry blossom in Osaka was far from over, even if I planned to depart for Kyoto less than three hours later. 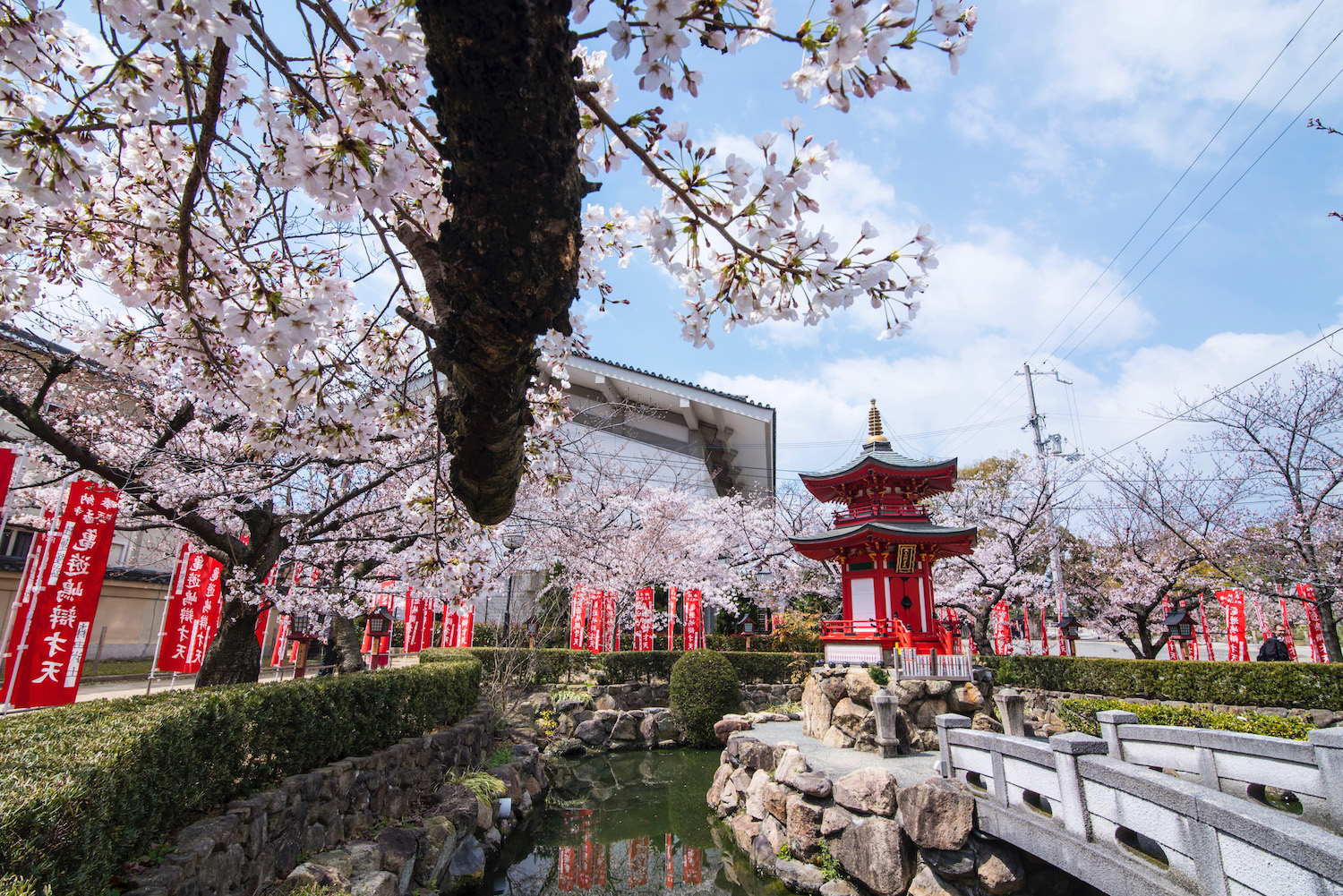 As its name suggests, Sakuranomiya is a park home to countless sakura trees, which line either side of the Yodo River, and when photographed from the right perspective frame Osaka Castle perfectly. (Incidentally, the “right perspective” this morning saw the sun shining precisely in the wrong direction, as had been the case when I first arrived at the castle itself).

Not that I was complaining. To be sure, somewhere between my stroll through Kema Sakuranomiya and my arrival at Shitenno-ji, the magic of hanami overtook the anxiety I often feel trying to get it just right. 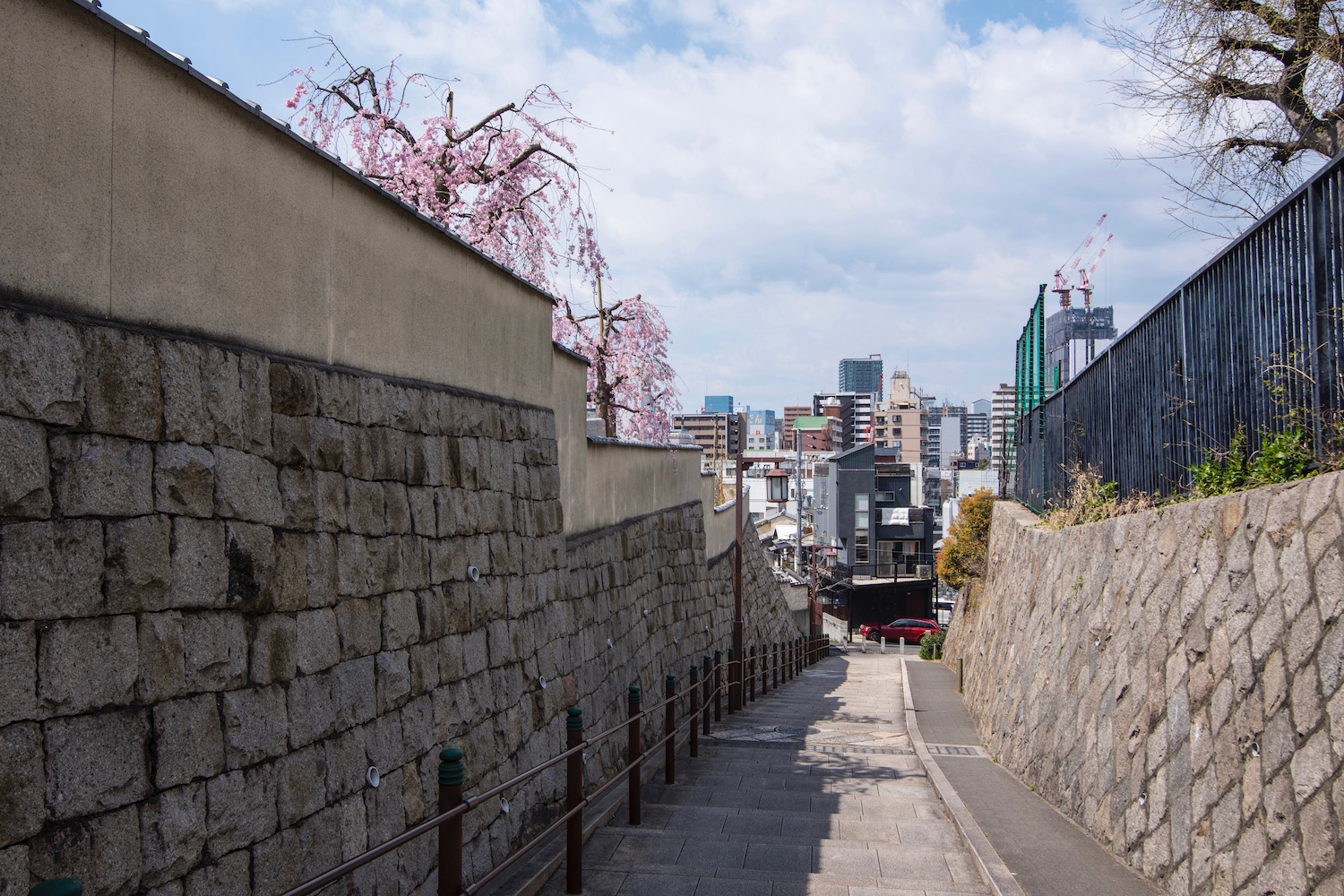 After a particularly beautiful Osaka cherry blossom sighting at the Benzaiten shrine I’ve missed on all my previous visits (likely because the ring of trees around it wasn’t blooming), I made my way back to the cemetery that crowns Shitaderamachi for one last panoramic view.

Osaka, broadly speaking, is a city that always exceeds my expectations. I never expect anything when I come here, and Osaka always knocks my socks off. (See also: my autumn trip to Osaka.)

I also never stay in Osaka as long as I should: One, maybe two nights at most each trip. This usually sees me leaving in some kind of rush, though to be fair I only ran for my Kyoto-bound Thunderbird because it was leaving less than a minute after I arrived at track 11.

As the train sped off, I fondly though back on my short Osaka cherry blossom experience, and tried to remember it in every detail. While I knew my day in Japan’s erstwhile capital would likely result in better photos, it would be anything but the largely tranquil affair my Osaka hanami had been.

Other FAQ About Osaka Cherry Blossoms

When is the peak of cherry blossom season in Osaka?

Osaka’s cherry blossoms generally peak in early April, around the 4th or 5th of the month. However, as is the case throughout the rest of Japan, the bloom can be early or late, depending on weather and other factors. I recommend waiting as long as possible (ideally, until mid-to-late March) before finalizing your cherry blossom itinerary.

Osaka Castle is the top cherry blossom spot in Osaka, but it’s not the only one. Others include the Osaka Mint Museum, the grounds of the 1970 World Expo just north of the city and various spots along the O River that runs just north of the castle.

Should I see the cherry blossoms in Osaka?

Osaka has some great hanami spots, but the city’s trees also reach their peak around the same time as those in Himeji, Kyoto and Nara—in other words, much better spots. If you happen to be in Osaka anyway you’ll enjoy yourself, though I wouldn’t necessarily prioritize the city.