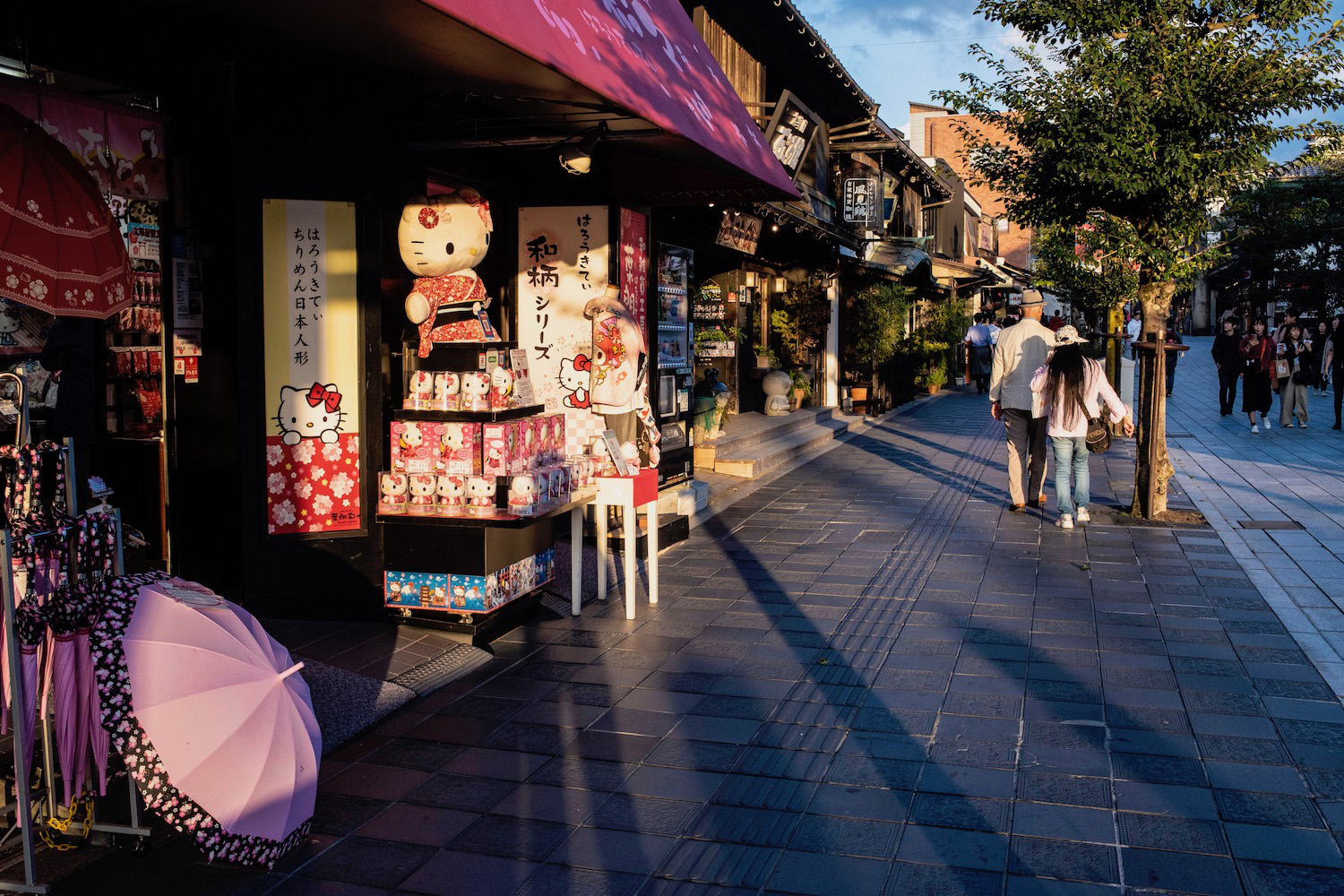 I fully realize, as I write this post, that the prospect of Hello Kitty travel isn’t going to appeal to all of you. And that’s fine—I’ve got dozens of blog posts and Japan trip ideas full of activities that have nothing to do with Sanrio characters, even if it is difficult to avoid kawaii culture altogether in Japan.

As for this post, I’ve not only spotlighted some Sanrio locations throughout Japan, but other ways to include Hello Kitty, including planes and Japanese trains. I’ll even mention a couple of Hello Kitty places you can encounter secondary Sanrio characters, including my personal favorite Gudetama.

Where Does Hello Kitty Come From?

If you’re thinking about Hello Kitty Japan, you might assume that the popular Sanrio character comes from someplace obvious, like Tokyo or Kyoto. In fact, while Sanrio is currently headquartered in Tokyo’s Shinagawa ward, the company’s roots are actually in Yamanashi prefecture, which is also home to Mt. Fuji (also known as Fuji-san—that’s where the company’s name comes from!).

While you can find Hello Kitty all around Japan, as I’m about to detail below, in many a Sanrio store, theme park, cafe and beyond, she was technically born in Yamanashi: She first appeared in 1974, just months after the formal establishment of the Sanrio corporation.

Where to Visit Hello Kitty in Japan

If you’ve heard rumors about a Hello Kitty theme park in Japan, they’re true. Located in Tama, Tokyo, Sanrio Puroland is an indoor amusement park that has rides and shows dedicated to a number of Sanrio characters, including Hello Kitty herself. It’s one of the best Hello Kitty Tokyo experiences you can have!

Hello Kitty also has an airplane (well, a couple of them) painted in her likeness, though this has evoked some controversy outside of Asia. Read my friend Becky’s review of flying on one of the Hello Kitty EVA Air planes (you’ll want to pay particular attention to this review, since it’s about the plane that flies to Japan on occasion) or watch Hello Kitty herself inaugurate EVA Air’s Taipei-Houston route a few years ago—to the sound of Michael Jackson’s “Billie Jean,” no less. I guess it’s a little strange that the Hello Kitty airline isn’t theoretically a Japanese one, but what can you do?

There’s not an entire Hello Kitty hotel, but you can reserve the “Hello Kitty” room at the Keio Plaza Tokyo Hotel, and as far as you’re concerned you will be sleeping in one!

Like those about the airplane, rumors of a Hello Kitty train are true. In fact, the limited edition Hello Kitty Shinkansen, which will run on the Sanyo line that runs westward from Osaka, are going to enter service soon. Buy your ticket to Japan now if you want to speed through Japan on one, and book your Hello Kitty Osaka adventure!

While there was once a Hello Kitty temple (which is to say a shrine that was very much not built to Hello Kitty herself, but which a fan of the character hijacked), it sadly no longer exists. Likewise, there is no Hello Kitty museum to my knowledge.

You can find a significant amount of regional Hello Kitty merchandise throughout Japan, from the Hello Kitty geisha in Kyoto, to a bizarre “black egg” version at Hakone‘s Owakudani, a geyser whose sulfur-rich water causes eggs cooked in it to turn black.

Destinations Related to Other Sanrio Characters

While Hello Kitty is far and away the most popular Sanrio character, Sanrio travel is not limited to Hello Kitty in Japan. My personal favorite Sanrio character, “lazy egg” Gudetama, is about to have a Seibu line train painted in its honor. (If you know anything about Gudetama, then you must truly worry for the people who will ride this train—that’s going to be one slow service!)

At the aforementioned Sanrio Puroland (aka Hello Kitty World), meanwhile, you’ll not only find a “Character Foodcourt” that includes dishes themed using characters from Chococat all the way to Spottie Dottie. There’s even a dedicated “My Melody Dream Cafe” for those of you who are fans of the rabbit. And to be honest, though I’ve tried to be as comprehensive as possible in this post, this is really only the beginning of Sanrio Japan travel!

Other FAQ About Hello Kitty Places

Is there a Hello Kitty Land in Japan?

There isn’t a “Hello Kitty Land” in Japan, per se, although you can see Hello Kitty at Sanrio Puroland, which is located outside of Tokyo. As a bonus, you can also see many of Hello Kitty’s friends there, which is perfect (purrfect?) if you’re a Sanrio fan.

Where does Hello Kitty live?

Hello Kitty was created in Yamanashi prefecture Japan. With this being said, it’s difficult to pin her down to any one home—Hello Kitty lives in all our hearts, and in countless shops, restaurants and other outlets all around the world.

Is Sanrio Japanese or Chinese?

Sanrio is a Japanese corporation, although its characters are also very popular in China. On that note, make sure you only buy Hello Kitty merchandise at official Sanrio outlets in China, as “Fake Kitty” swag is very popular (and often indistinguishable from the real thing).

Whether you intend on executing these Hello Kitty Japan travel plans or are simply curious about how far-reaching Sanrio’s most popular character is in the real world, I hope this post has been illuminating. Would you go to Sanrio Puroland, or would you simply take a trip on the Hello Kitty Shinkansen and call it a day? Personally, I’m waiting for the day when other characters (namely, Gudetama) are as represented in Japan as Hello Kitty, but I’ll take all the kawaii I can get for now, whether I see Hello Kitty in Osaka or anywhere else in Japan.