Mentally, I was already at Motonosumi Inari Shrine just before sunset as my body hungrily wolfed down breakfast at a ryokan in Tsuwano. James Brown’s “Sex Machine” played in the car on the way to the train station, but all I could hear was the call of seagulls and the sound of waves.

And the pitter-patter of feet of at least a few tour buses—that would be a given. In spite of how relatively obscure Yamaguchi prefecture is, the post-war coastal answer to Kyoto’s Fushimi Inari was ubiquitous enough that at least Japanese tourists (and, likely, some from nearby countries) would come to see it in droves.

My daydream ended after I picked up my Toyota hatchback rental across the street from Shin-Yamaguchi station. Not because I stopped dreaming, mind you—I just didn’t want to cause a wreck.

Everyone in My Vicinity

I expected busloads of tourists at the clifftop taisha for which I was ultimately bound, but not at Beppu Benten, a “blue pond” that is significantly smaller and less impressive (but also clearer) than the one at Biei in Hokkaido. It threw me for a loop to hear Korean spoken by no less than 50 people (everyone in my vicinity, more or less), and I wondered whether they were as surprised by the minute expanse of the water. 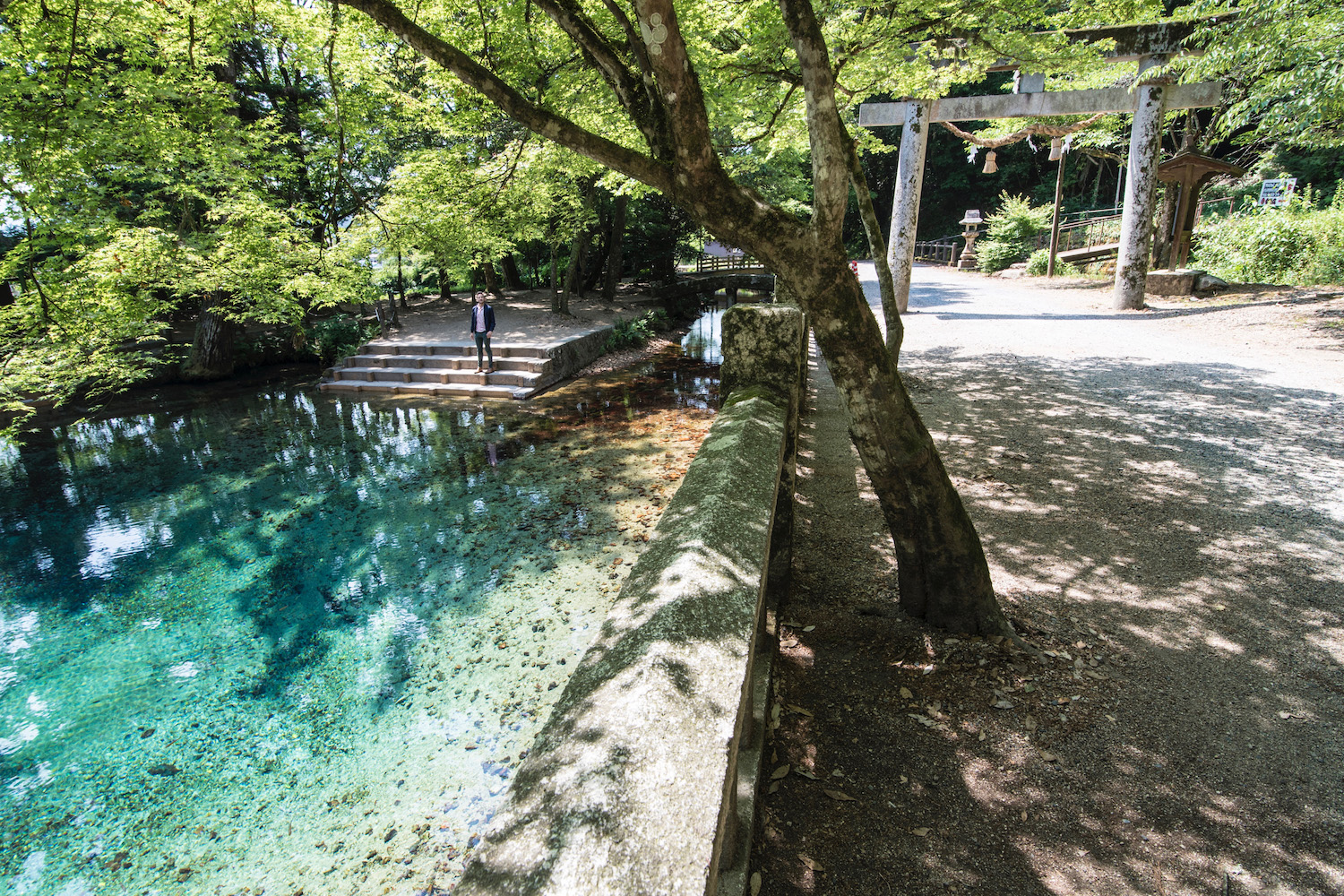 Undeterred, I pointed the Vitz’s GPS toward my next destination, the coastal castle town of Hagi. Like most of the castle towns I’ve visited during my San’in trip, with the notable exception of Matsue’s, this one was in ruins.

After traipsing along the reconstructed walls, I sat down for a sumptuous lunch of tonkatsu and plotted how I’d spend the poor-light hours of the afternoon before heading to Motonosumi Inari Shrine. Initially I thought I might trace the story of the so-called Choshu Five, a quintet of young scholars who sojourn to England in the mid-19th century was a catalyst of the Meiji-era industrial revolution (though they certainly weren’t celebrated at all in their day for it). 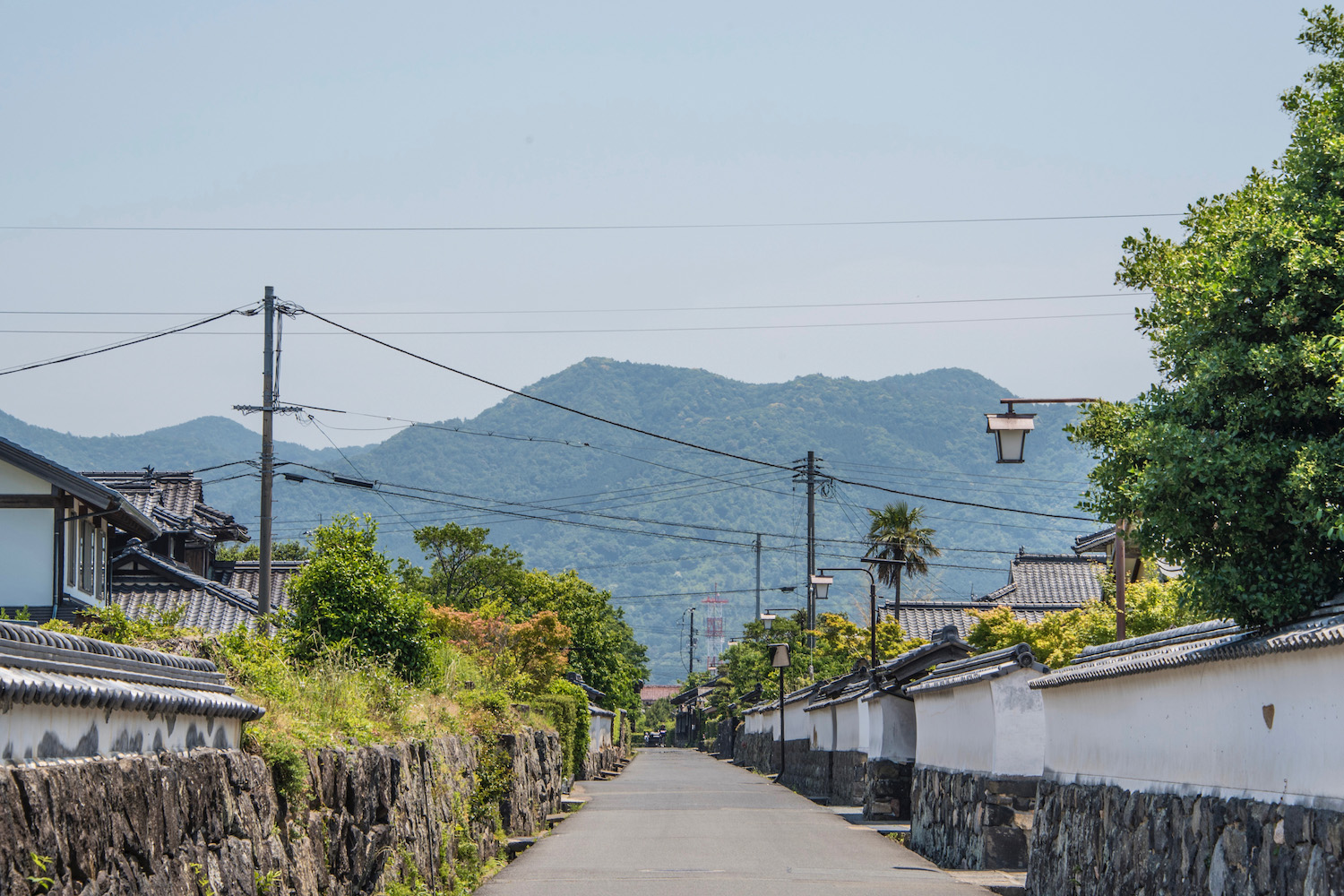 However, realizing that one of the sites I plan to see tomorrow in Shimonoseki (where I won’t have a car) is neither near the city center nor accessible via public transport, I made a last-minute change to my plans.

As a bridge, Tsunoshima Ohashi is woefully ordinary, at least as far as bridges in Japan (whose engineering other countries only dream of, in no small part as a by-product of the sacrifices the Choshu Five made) are concerned. However, the water beneath the bridge evokes the beaches of Okinawa, and still did so when I arrived in spite of how relatively poor the lighting was. 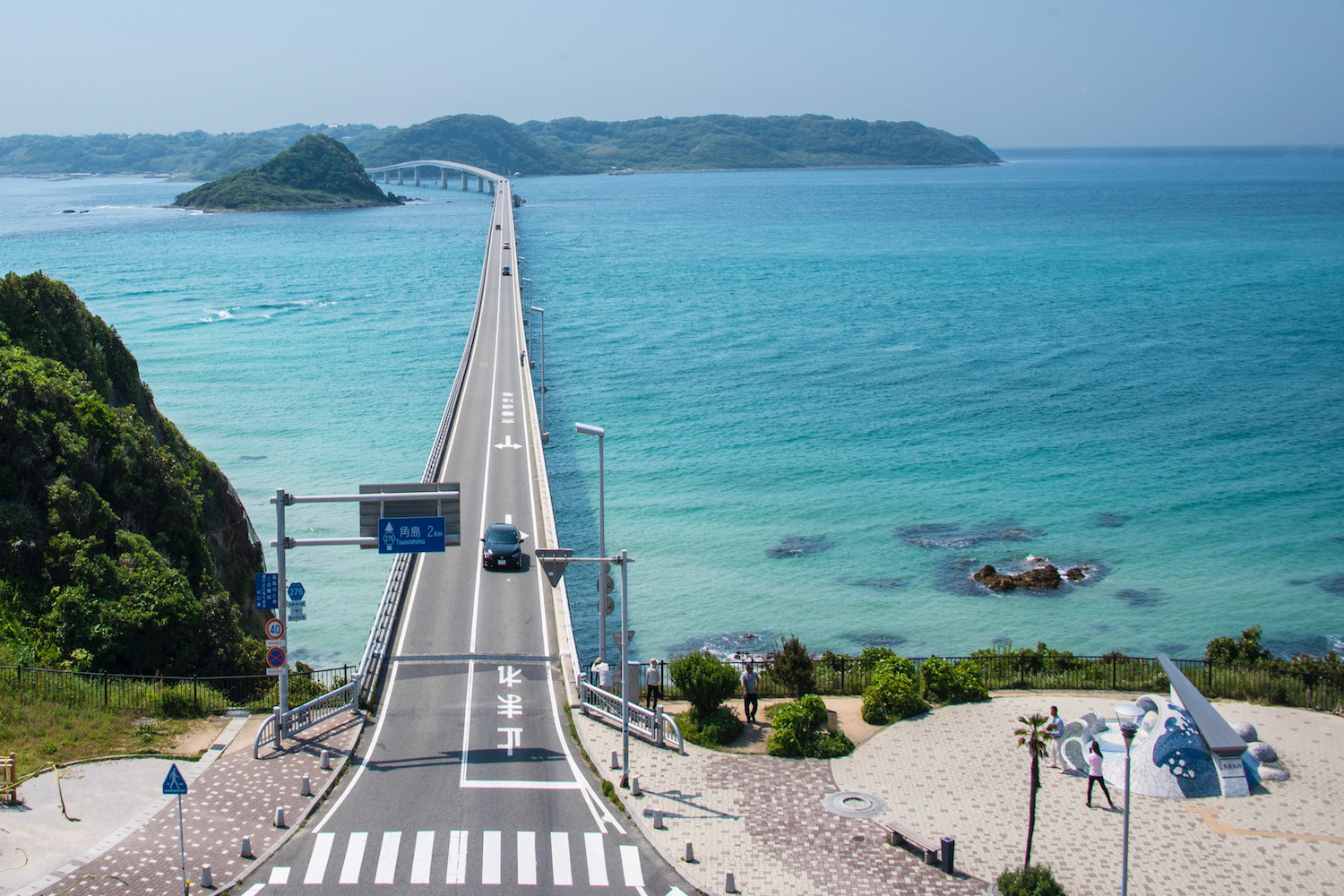 In spite of the waves being almost fluorescent and the sand being just a shade off-white, the shores beneath the lookout point were positively plastered in plastic, a sight whose commonness is making me call the reputation of Japanese as master recyclers into question. I hoped the same terrible trashscape wouldn’t greet me beneath Motonosumi Inari Shrine, or that if it did it might be obscured.

The sun was still a bit too high in the sky for my taste when I left Tsunoshima behind, so I bypassed Nagato (where the shrine is located) and made my way for Omijima. Though the small fishing (and I gather, unfortunately, whaling) communities were picturesque and maybe even beautiful, they overall aesthetic of the island wasn’t what I was expecting—no Uradome Coast here, folks! 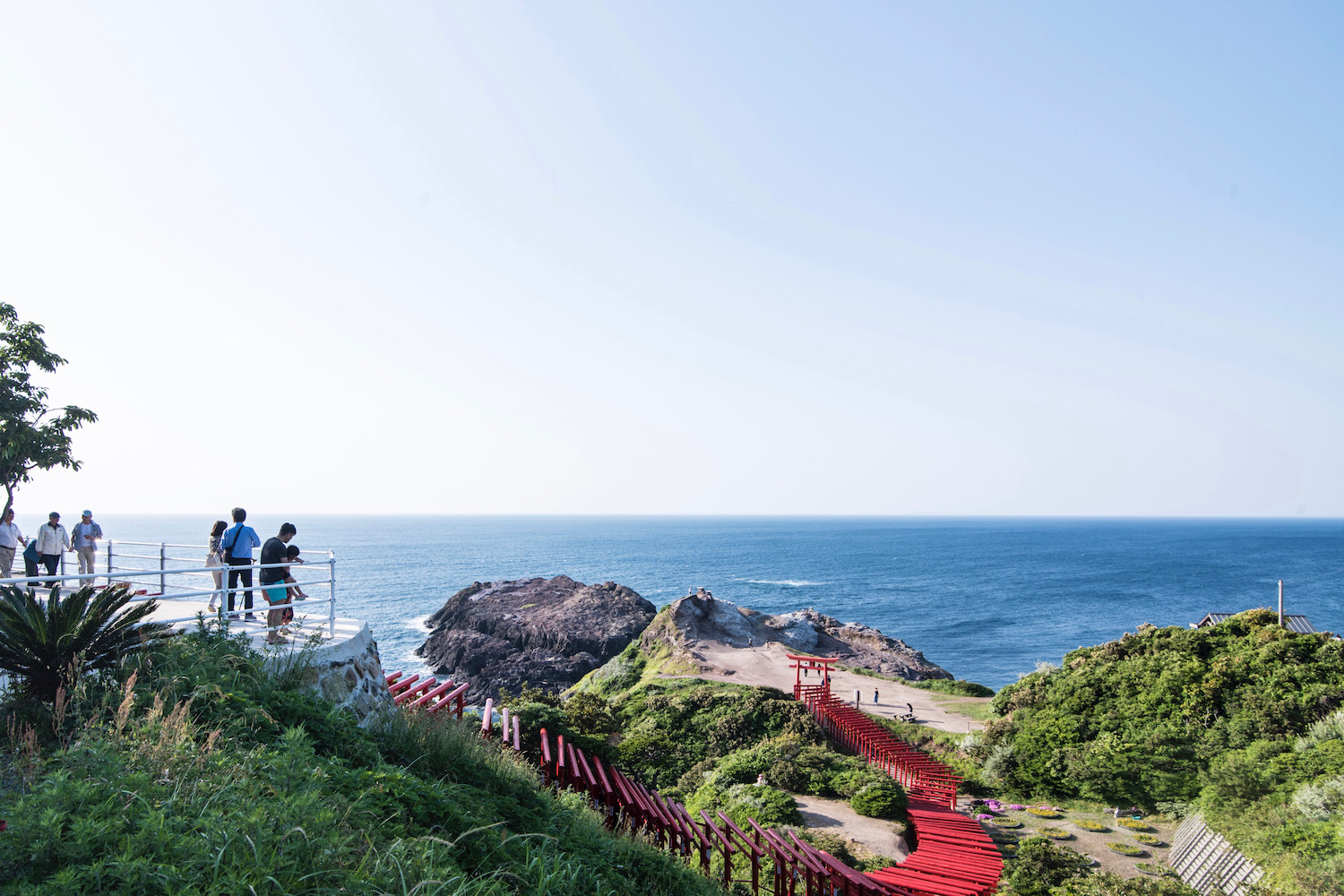 I took my time driving the 20 or so kilometers to the parking lot of the cherry-red gates. I briefly felt shocked—the parking lot a man in uniform waved me into appeared, initially, to charge a flat ¥1,000 fee.

Motonosumi Inari Shrine might become a tourist trap in the future, but it’s abjectly serene in the present. (The notice on the parking machine, which of course was only in Japanese, had been about the largest bill accepted, not the price I’d need to pay.) 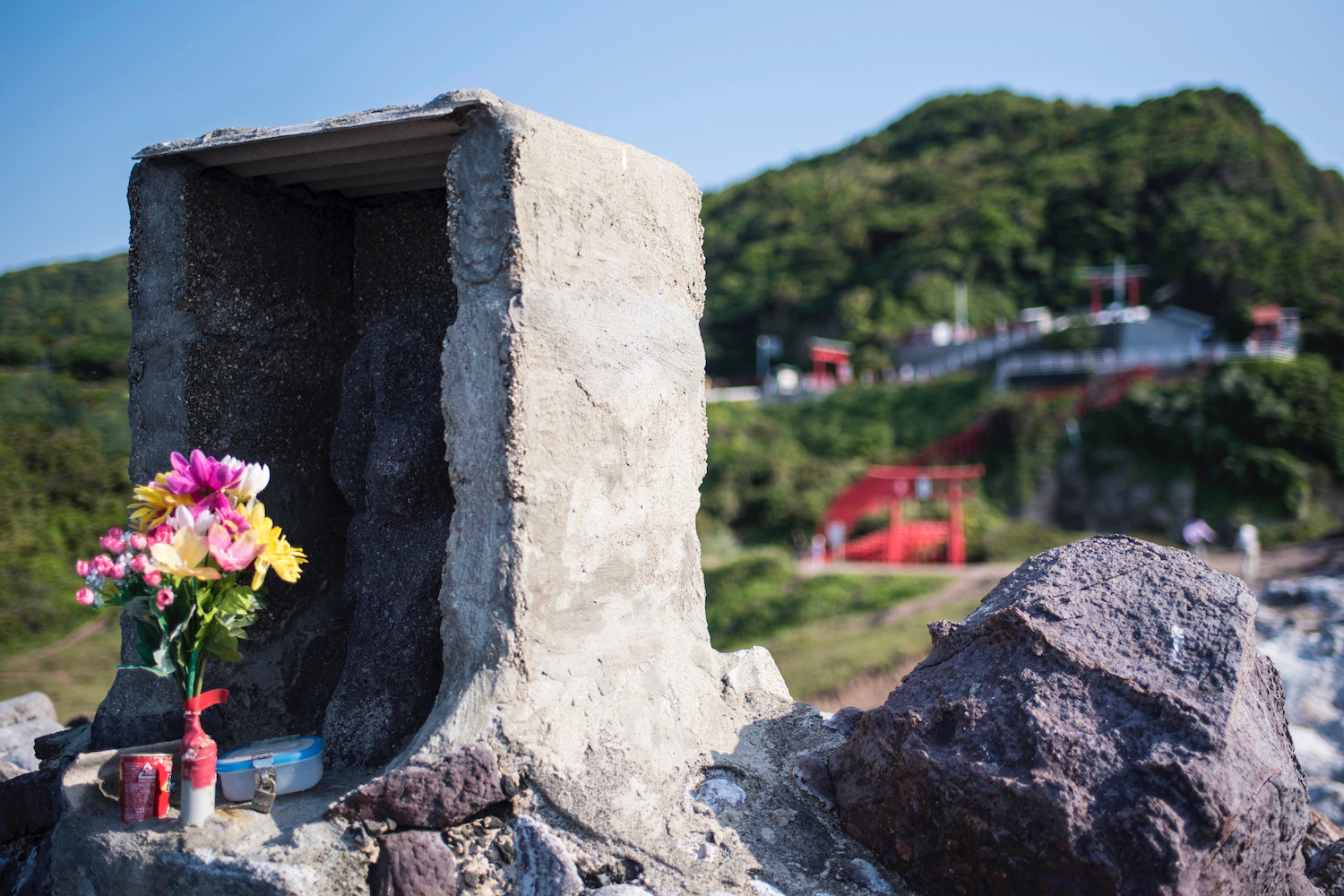 Locals claim a visit from a fox spirit compelled their ancestors to build the 123 gates that stand here; the internet tells me this took place in 1955. But there’s something decidedly 80s about the site in my mind (certainly, the tacky trimming of the various stone Buddhas that adorn the site), and not because I mistakenly remember having read that the shrines was born during the same decade I was.

The experience was precisely as I’d imagined it would be this morning at breakfast, and when the octogenarian man (the husband of my ryokan’s owner) dropping me off at the train station started listening to extremely suggestive music. Only my body was here too, this time, and not just my mind. 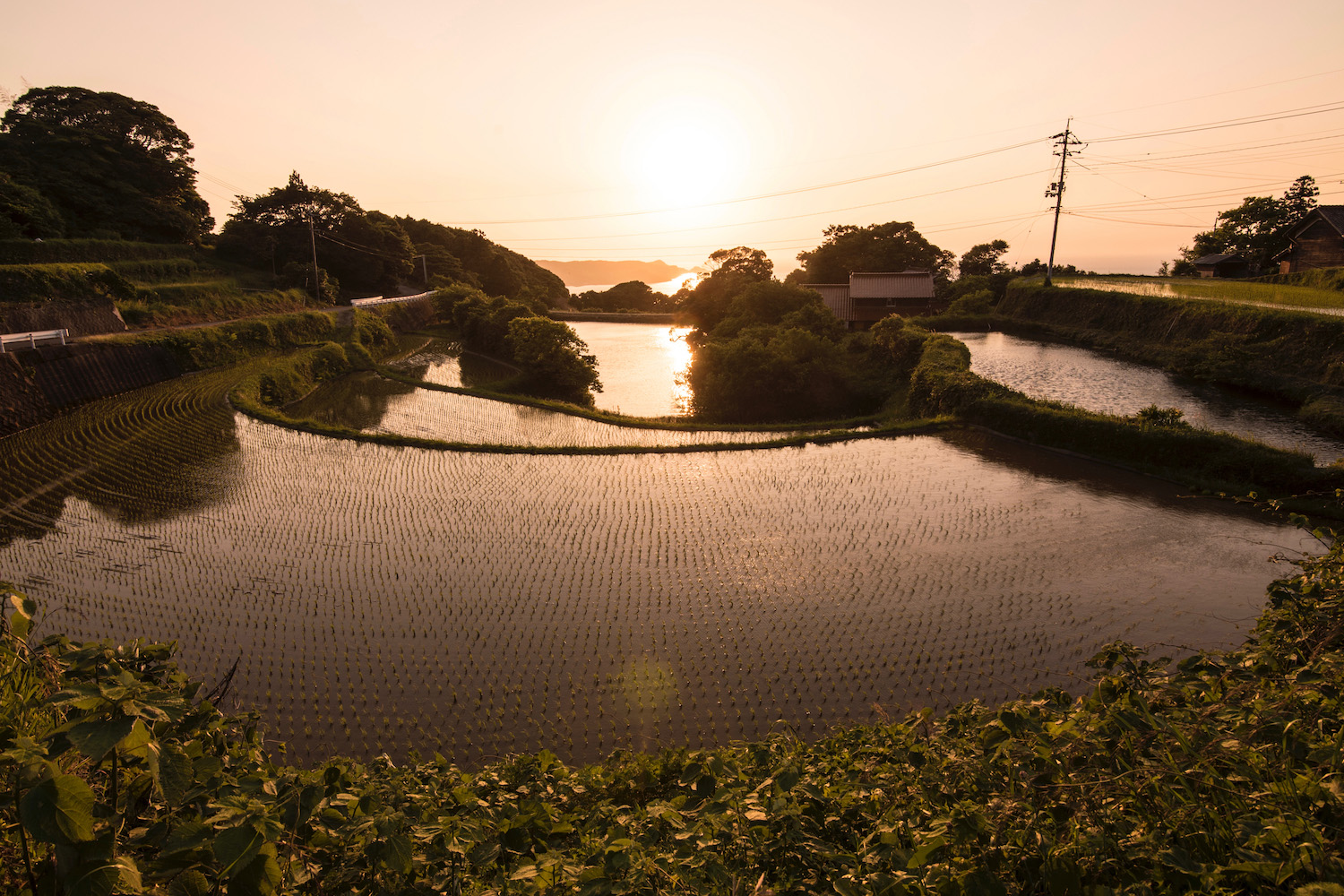 Motonosumi Inari Shrine is officially the final stop of my San’in trip, the only attraction of my core bucket list that remained prior to today. Certainly, it would be difficult to think of a more beautiful note to end it all on, even if the fat lady is still warming up her vocal cords.

The epilogue of my day (though not my larger journey—there’s something else tomorrow) was to be Higashi Ushirobata, a stack of rice terraces slung over a mountain just above the 123 gates, with a view of the coast (and of the sunset, when it’s a colorful one) that reflects in its pools.

I knew I wouldn’t be able to see sunset today—it takes place around 7:10 pm and I needed to return my car, to an office an hour and 10 minutes away, by 8. I was, however, hoping to get a nice shot of the terraces, though it was not meant to be: The majority of them were already spent, their once-wet basins now filled in with earth until next April.

I did manage to find another spot in the same vicinity to get a relatively nice shot, which is all I really wanted, frankly. I don’t want agriculture stealing the spotlight from Motonosumi Inari Shrine, where you might say I still am in mind, even now.